Declawed: The hospital will now use simulators, which some say are not as effective for training. 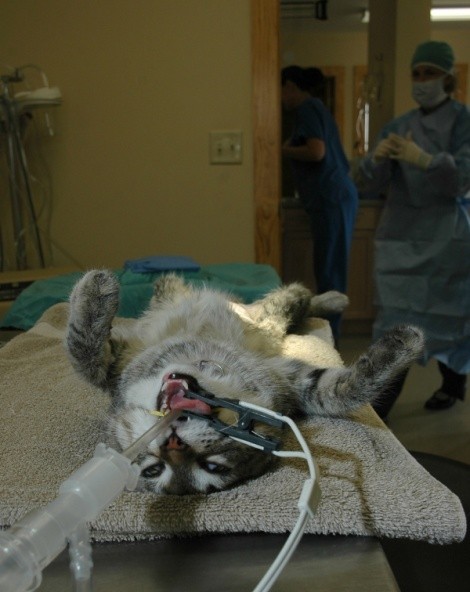 On Feb. 9, Primary Children’s Medical Center canceled a scheduled training for flight nurses involving intubation of cats—used as proxies for infant children. The cancellation came midway through a series of actions People for the Ethical Treatment of Animals (PETA) had planned to compel the hospital to end the practice.

Intubation is inserting a tube or device down a patient’s throat to feed oxygen to the lungs. The training for flight nurses involving live cats was just one session in an overall conference.

Jeremy Beckham of PETA says using cats as a proxy for human children is old-fashioned and falling out of favor.  He claims that lifelike simulators designed for intubation training are not only superior for training medical practitioners but also are widely used in training programs across the country.

“There are not very many medical institutions still using animals for [intubation training],” Beckham says. The Physicians Committee for Responsible Medicine’s recently updated survey of pediatric residency programs lists 134 programs that use only simulators, while 19 use cats. “We’re always on the lookout [for hospitals that train using animals] ... because we feel the case is very strong that they should be using simulators.”

Primary Children’s uses both. Ed Clark, the hospital’s chief medical officer, agrees that simulators are valuable and, he says, the hospital has spent $1.5 million purchasing and building a simulator-training facility. The cats are used for flight nurse training in particular because of the special need for those nurses to have the most top-notch training, which he believes comes from intubating cats.

Flight nurses, he says, are flying solo—or almost—so they need better training than nurses in a hospital. “Transport nurses are a part of a three-member team. ... Being a nurse in an ER where you’re surrounded by physicians and you have access to experts in airway management is very different than a transport nurse who’s at 8,000 feet in a helicopter and has to reintubate a patient.”

Primary Children’s spokeswoman Bonnie Midget says the training has been misrepresented. “The cats are not harmed. They’re treated in the same gentle way that a child is going to be intubated,” with anesthesia and monitoring, Midget says. “One-hundred percent of them over the years have been placed in adoptive homes. Some of the cats were adopted by participants in the lab in past years.”

Clark adds: “The outcome [for cats in the intubation training] was far superior to what they would have faced, because these were cats that would have likely been euthanized [at animal shelters].”

Clark says he’s unaware, however, of any medical research that supports or contradicts the claim that practicing intubation on a cat is better preparation than using simulators. PETA points to a 2009 article in the Journal of Emergency Nursing in which a flight nurse and flight medical team educator who helped develop the Pediatric Advance Life Support training program was “mortified” to discover that some hospitals were using animals as a part of the PALS course.

“Most PALS instructors I speak with share the same response: ‘How does maiming animals help us teach pediatric resuscitation skills?’” wrote Cindy Tait. “The very first PALS course I attended at a University Medical Center used live animals. When they brought live kittens out on waxed metal trays I left the room and wept.”

In the Journal article, Tait reviews the differences in anatomy between a cat and a human child and concludes that the analogy is weak and that simulators provide superior training. Clark disagrees. Aside from jaw and cosmetic differences, he says, “the issue is, ‘What do the airways look like?’ ” When asked to respond to Tait’s view, Clark said, “I guess everyone is entitled to their opinion.”

That’s true, says PETA’s Justin Goodman, associate director of laboratory investigations, but he believes most organizations relevant to the debate have already issued their opinions against using cats for the training.

“Simulators, not animals, are the training standard for flight nurses in the Air and Surface Transport Nurses Association’s ... advanced trauma course. And the Emergency Nurse’s Association certification for flight nurses does not require or recommend that any animal-based training be completed,” Goodman says.

The two sides starkly disagree on how invasive the procedure is for the cats. “The reason we have to train professionals is if you make a mistake, you can cause internal bleeding, swelling and death. Our information suggests some cats in this are killed, so it’s not a light procedure,” Beckham says.

Midget says some of those messages, however, were posted in response to wall postings of past patients, who wrote about good experiences with the hospital. “They were posting to those patients’ families’ posts information that their child care was provided by ‘people who mutilate and torture animals,’ which just isn’t true,” Midget says. That was “inexcusable,” she says.

Their decision to probably end the use of cats in future trainings was not based on the PETA actions, Clark says, but in a roundabout way, PETA was probably partially responsible—along with the Utah Legislature. Clark says cats for the training could not be obtained at a reasonable price and speculates some responsibility for those high prices goes to 2010’s House Bill 107, sponsored by Salt Lake City Democrat Rep. Jennifer Seelig and co-sponsored by Provo Republican Sen. Curtis Bramble. That bill removed the obligation for Utah animal shelters to sell their animals to research laboratories but allowed the shelters to continue doing so at their discretion. That bill passed in the wake of controversy and news coverage created by PETA’s undercover investigation of animal labs at the University of Utah.

According to PETA, all of Utah’s shelters have chosen to end the practice except Northern Utah Valley Animal Shelter, or NUVAS, in Lindon.

Countering Clark’s claim that the cat trainings were done because they are superior to other methods, Goodman says the hospital’s lack of scholarly research to prove that claim suggests the use of cats was just “institutional inertia. … This is what they’ve always done, this is what they’re comfortable with, and there may be some apprehension about trying something new.”

While PETA is celebrating—a planned protest was switched to a victory party after the hospital canceled the training—the battle may not be over. Clark did not promise that cat intubation trainings are done for good. “I think we’ll have to see what the future brings. What we decided to do was not conduct a lab at this conference. If this conference continues in the future, it’s unlikely we’d be doing laboratories then, either.”