This prom season, let us reflect on fine dining through a teenage lens. 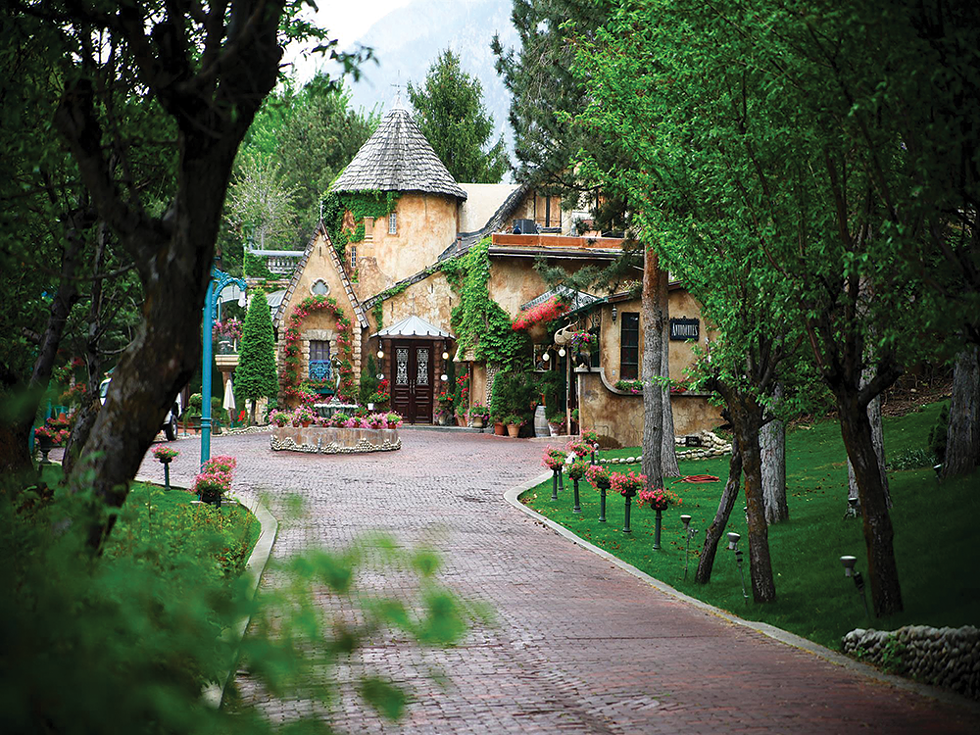 When you grow up Mormon, you don't get a whole lot of encouragement to be alone with a member of the opposite sex. At a very early age, I learned that an unsupervised social call with a girl was the first step on the path to eternal damnation. So, when all the church leaders and parents suddenly rallied around the concept of high school dances like prom, we started treating these events like the Super Bowl. Allthat pent-up hormonal frustration that we knew wasn't going to be spent having sexsomehow manifested itself throughridiculously complex invitation rituals and 12-hour day dates.It was weird.

One of the most crucial aspects of said day dates was the pre-dance dinner. Places like The Olive Garden or even Sizzler would do for the Spring Formal or the Winter Jubilee,butprom was a different beast. That dinner was something that prompted you to take out a high-interest loan from your parents or work extra shifts at Taco Bell.When deciding on the perfect dinner destination, the choice inevitably came down to one of these threepromtasticbastions of fine dining.


La Caille
Anyone in the class of 2001 will tell you that La Caille, pictured, was the pinnacle of prom-centric fine dining. Its impressive acreage is filled with floral nooks and crannies that make great backdrops for photographs, and the restaurant itself looks like it was summoned directly from the scenes of a Disney film.

For high school students who have never left the country, the interior also does a great job of evoking a distinctly French pastoral vibe—très romantique. The true test for any teenager footing the bill during a visit to La Caille was always to not let the shock of seeing the menu prices become visible to your date. Even when you crunch the numbers and realize that a filet mignon costs as much as a brand-new PS4 game, you have to maintain that poker face. If your eyes bug out for even a second, you'll make your already slim chances of getting lucky disintegrate completely.

Once the food arrives, it doesn't disappoint. In keeping with the adolescent propensity to try and gross out everyone at the table, it's fun to order a plate ofescargotand dare one another to take the first bite. It's easy to leave La Caille happy as a teenager. Dropping a few hundred bucks on a meal when you're earning minimum wage at a mall job pretty much ensures that even if you or your date didn't enjoy your meal, you sure as hell pretended to.
9565 S. WasatchBlvd.,801-942-1751, lacaille.com

The Roof
Hitting up the 10th floor of the Joseph Smith Memorial Building was a homerun for us LDS teens on many different levels. When you're growing up Mormon, ideas of romance often blossom into daydreams about getting married, mostly because we're not really allowed to do romance-y stuff until marriage. All the same, enjoying a fancy but moderately priced dinner with a stellar view of Temple Square in the background was a mainline of squeaky-clean Mormon romance. It got our heads in the lovey-doveyzone while casually reminding us to keep our loins in check.

There's also something about the buffet-style service at The Roof that alleviates some of the pressure of fine dining. There's no anxiety about ordering the wrong thing or spending too much because the whole meal costs around 40 bucks per person and everyone involved can pick and choose whatever they like. While eating at The Roof might not have quite the same impact for non-LDS prom groups, it's straight up fine-dining catnip for those planning on facing their bishops with a clear conscience the next day.
15 E. South Temple, 10th floor, 801-539-1911, templesquare.com

Benihana
Sometimes, the pressure of planning a pre-prom destination restaurant that was sure to inspire romance with a capital "R" became too much to bear. That's when Benihana would always pop up. Although it's a bit of a dark horse in Utah's prom scene, visiting thisnationally renowned hibachi restaurant was perfect if you had the right group of people.Revisiting it as an adult just serves to reinforce Benihana's prom date vibe—it's nice in an approachable kind of way, and its inner kitsch is obscured by its outward presentation.

The real draw of Benihana is, of course, the tableside spectacle—it's the only place I can think of where you're actually stoked to see a shrimp tail end up in your drink.The price point for what you get is totally doable on a part-time budget, and it's endlessly entertaining to watch a skilled hibachi chef prepare a meal right at the table.

You could actually tell quite a bit about the evening ahead of you based on how your date reacted to the whole operation, which also made it a good litmus test. If you're eating here with a person who enjoys watching meat and veggies get sliced up mere inches away from their face, there's a good chance they'll stick around when they find out what a crappy dancer you are. While you're there, pour some virgin Benihana Punch in honor of The Five Alls—a pre-prom staple that's now gone, but not forgotten.
165 S. West Temple, 801-322-2421, benihana.com