"Prequel" stands well on its own 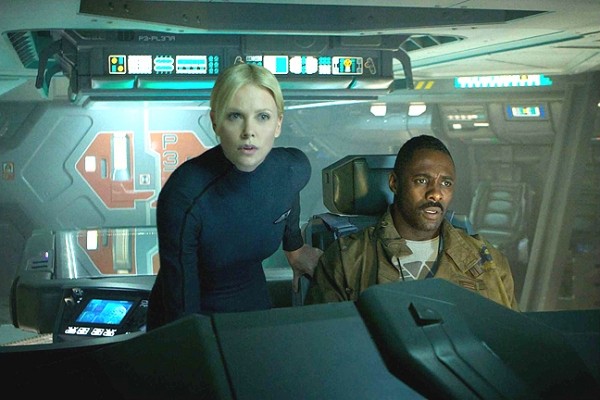 While the Internet does its typical speculative-overdrive thing, director Ridley Scott has played fairly coy about whether or not his new science-fiction tale Prometheus is, in fact, a “prequel” of sorts to his landmark 1979 horror-in-space film Alien. Please stop reading now—and stop reading all film media everywhere for the foreseeable future—if you’d still consider such information a “spoiler.”

Because when talking about Prometheus, it seems preposterous to avoid talking about the acid-blooded, double-jawed, get-away-from-her-you-bitch killing machine in the room. Those who consider Alien one of the most primally, viscerally effective thrillers ever made—and I count myself among them—are bound to come in with an extra combination of anticipation and dread, wondering whether Prometheus could be a worthy addition to the creature’s canon or merely a feature-length extrapolation of Scott’s penchant for “director’s cut” tinkering. How much do we want to know about the “origin” of the alien? And how much will holding this movie to the standard of a genre classic make it hard to recognize what it does right?

It actually does a fair amount right, as it launches an exploratory team into space to discover what may be the origin of humanity itself. Anthropologists Elizabeth Shaw (Noomi Rapace) and Charlie Holloway (Logan Marshall-Green) lead the scientific crew to a destination gleaned from ancient pictography, a planet where mysterious structures indicate the presence of an alien intelligence. The corporation that financed the mission—represented on the ship by Meredith Vickers (Charlize Theron) and a robot named David (Michael Fassbender)—may have its own agenda for what they might discover there, but all plans could be put on hold when it becomes clear that something unfriendly is creeping about.

The “unfriendly something” is what a lot of folks are coming to see, but Scott—working from a script by Jon Spaihts (The Darkest Hour) and Damon Lindelof (Lost)—tiptoes deftly around his showcase sequences. As spectacular as Prometheus is from a production design standpoint—even providing a rare, superb moment in the now-omnipresent use of 3-D—it’s actually got some heady ideas percolating beyond baseline summer-blockbuster material. Dr. Shaw’s quest for understanding these star-farers who may have birthed humanity allows an opportunity to dig into what it is we consider the characteristics of “God.” And as the consequences of dabbling with the fundamental nature of life begin to mount, Prometheus becomes a compelling case for the difference between playing God and being God.

None of which is to suggest that Prometheus also doesn’t deliver the goods as an action-suspense film, though it certainly doesn’t aspire to the nonstop thrills of James Cameron’s Aliens. Scott concocts a couple of terrific cringe-in-your-seat moments, most memorably when a character is required to engage in a little emergency self-surgery. He’s also got a terrific asset in Michael Fassbender, whose enigmatic David keeps you guessing as to whether he’s going to wind up being more Ash or Bishop. Throw in some funky creature effects that evoke Carpenter’s The Thing as much as they do Alien, and you’ve got something that doesn’t forget the meat and potatoes.

Yet Prometheus also keeps throwing small frustrations at you, preventing it from reaching its full insinuating potential. The character relationships are the kind that are sometimes built on the foundation of a single scene, yet are expected to carry major narrative weight. More significantly, Scott and company seem to feel obliged to fill in every remaining gap in the Alien history, assuming that elements from the original film that have always tantalized with their mystery actually needed definitive “origins.” It’s the same misguided thinking that gave us midi-chlorians to explain The Force, and Hannibal Lecter’s traumatic childhood. For a film that is in some ways about confronting the great unanswered questions, Prometheus doesn’t seem to trust that we can be OK with leaving some of them unanswered.

That’s part of the inevitable challenge of venturing back into this territory: If you’re going to do it, you feel obliged to justify it by doing it all the way. Prometheus offers a story that’s effective on its own merits; the main thing that stands in its way is the history that may have piqued Ridley Scott’s interest in the first place.