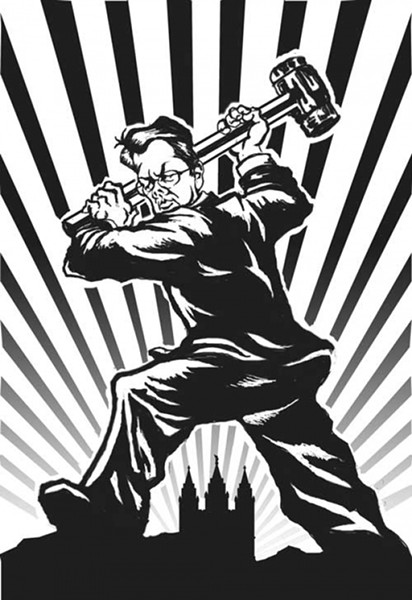 Here at the Deep End, our crack team of Truth Specialists are pleased to have played a small part in outing KSL News, now known as FPN, as the propaganda organ of The Church of Jesus Christ of Latter-day Saints. The switch to naked propaganda has been in the works for some time now, but it has taken a while for the Elect Lady of Utah journalism to fling her falsies to the floor and reveal herself to the world in all her God-given glory.

In his announcement that KSL would henceforth and forever be known as the Faith Promoting Network (FPN), Clark Gilbert, the High Priest of Disruptive Innovation, gave a special thanks to the Deep End for being the first to point out that the news organization formerly known as KSL had vacated the august precincts of journalism.

“But the Deep End missed the big picture,” Elder Gilbert said with a twinkle in his eye. “It reported a couple of weeks ago on how we had dwindled into triviality, using as an example our icky story on David Archuleta. Little did the Deep End know that our Plan of Innovation has for a long time now been focused on transforming a respectable news organization into an unabashed organ of religious propaganda, which might strike some as somewhat redundant.

“Nevertheless, here’s a shout out to the Deep End,” concluded Elder Gilbert. “We sure appreciate you.”

Well, we certainly appreciate your appreciation. Though it should be obvious to all objective observers that FPN is no longer in the news business, a recent story on the six o’clock news illustrates how whole-heartedly FPN has embraced its new propaganda mission. On Thursday, April 12, FPN (still advertising itself as KSL) opened its propaganda cast with a story on MSNBC host Lawrence O’Donnell’s apology to the host of Mormons offended by something he said about Joseph Smith, the religion’s founding prophet, seer and revelator. It was a long story, and went into detail about O’Donnell responding to presumptive Republican presidential nominee and former Mormon missionary, bishop and stake president Mit Romney’s claim that the Obama administration was waging a war on religion and that it wanted to establish a new religion called “Secularism.”

Now, before we get back to the FPN’s piece on O’Donnell’s apology, let’s spend just a minute doing our own mulling over of the claims made by our favorite Mormon, Mit Romney (who, if you’ve forgotten, downsized his first name a few years ago when he was downsizing the number of his opulent residences, eager to be seen as a regular Joe instead of a clueless rich guy).

As is his wont, Mit just makes stuff up, perhaps in the grand tradition of religious personages everywhere. They are not merely fun little political fibs, but rather Mit-faced lies, the worst being the charge, “based on reports” he has first-hand “knowledge” of, that the Obama folks are sitting around the White House receiving visions for a new religion. What next, the testimony of 11 witnesses who have seen and hefted the new Secularist scriptures?

And now, my brothers and sisters, let’s turn our attention back to FPN’s April 12 propaganda piece on O’Donnell’s apology. A genuine news story is supposed to presents facts, especially facts that are the very basis for the story. In the FPN story, however, the most important fact was not reported. The propaganda specialist, standing with a nice shot of the Temple and the Church Office Building in the background, informed viewers, “We’re not going to repeat O’Donnell’s original words,” the words that led to the apology that FPN was reporting on.

For the edification of our readers, here are O’Donnell’s original words, words the powers that be at FPN, formerly known as KSL, did not want falling on innocent ears: “Mormonism was created by a guy in upstate New York in 1830 when he got caught having sex with the maid and explained to his wife that God told him to do it.”

Alas, O’Donnell didn’t get it quite right. Joseph Smith had already started his church when his wife Emma discovered that he was having celestial relations with 16-year-old houseguest and adopted daughter Fanny Alger, among others. You can look it up.