The faithful are still waiting for Bishop Koyle’s Mormon dream mine to pay out. 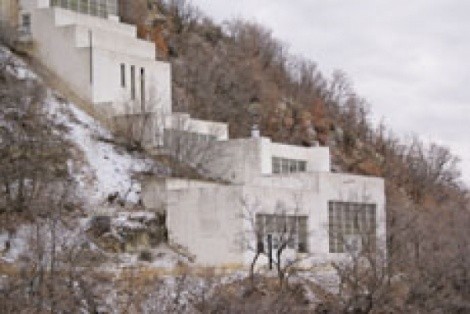 People who routinely drive along U.S. Highway 91 between Spanish Fork and Payson have come to consider the oddly futuristic, white-stone mill built into the hillside as part of the scenery.

Utah County’s “Dream Mine,” as it’s been known for more than a century, rarely turns up in conversation, either.

It seems most people would rather not discuss the mine’s ancient and fabled promise: wealth beyond imagination, where rivers of precious gold and platinum course beneath the docile farm community. What’s more, nine vaults are said to lie deep within the mine, filled with the treasures left by an ancient race from the Book of Mormon known as the Nephites. As legend goes, the Nephites’ wealth was set aside for God’s chosen people during a time of uncertainty as a blessing to fortify the faithful against the ensuing chaos of the apocalypse.

John Hyrum Koyle foretold that prophesy in 1894. A poor Mormon farmer from Spanish Fork, Koyle said his visions led him to build the mine, where in the early 1900s, he preached the vision to a steadfast group of followers. He did so until 1948, when authorities of The Church of Jesus Christ of Latter-day Saints excommunicated him.

While the mine has always been part of the rural tapestry of southern Utah County, the Dream Mine hasn’t always been the subject of polite dinner conversation. Koyle’s prophecies prompted the church to question his mine operation—which sold stock for decades without producing an ounce of pay dirt—and his efforts eventually led to his excommunication.

The mystery of this mine, and of the man who dedicated his life to it, have both intrigued and inspired faith from modern-day believers. Many walk a fine line between embracing fundamentalism and living their mainstream Mormon faith. Believers once met for sermons at the mine itself, but through the years, fear of church reprisal drove the faithful from public worship. Decades passed, only to have believers reappear in a more discreet and anonymous gathering place: the Internet.

Online believers have brought new life to an old prophecy while trading stock, sharing stories and preparing for the last days—all while trying to fly under the radar of LDS general authorities. Today, the discussion group buzzes with followers’ talk of the mine and predictions of the apocalypse. When will it come and how? The time seems close at hand and the signs are all around, according to the e-group discussion.

“More volcanoes, big [earthquakes], large tsunami or tsunamis,” one believer posts. “Probably before the end of the year, unless geologically things calm down. A volcano in Alaska should be about to blow also. More volcanoes are about to erupt, probably in the Cascades. A chunk of people possibly dead within a few months from now.

“Spring: Church troubles—a ripe time for change, due to the shock of what’s happening, and good time for the Servant to show up(?) May—church probs, power plant terror attacks (this is first econ collapse). 2nd collapse in Fall 08, along with Utah EQs and other locations.”

An e-mail discussion group has helped resurrect the century-old dreams of a man who believed God’s angels had singled him out for a very special mission.