The faithful are still waiting for Bishop Koyle’s Mormon dream mine to pay out.

The Dream Goes Digital
Fear of their own excommunication drove Koyle’s followers underground for years, and talk of the mine shrunk to a whisper.

But recently, followers have found safe haven in an e-mail discussion group created by Orem chiropractor (and mine stockholder) Delynn Hansen. “Doc” as he is known online, believes starting the e-group was no accident.

“The spirit told me to start the e-mail group, and I didn’t question it. I just did it.” Hansen says.

Hansen is busy on a recent day in his Orem office, cheerfully greeting clients and setting them up on matted tables. He’s adorned his office walls with a variety of odd art-deco style tribal masks. In the farthest corner of the office, an unseen machine rhythmically emits a loud ticking noise like a metronome. Hansen’s desk, tucked into the corner, overflows with papers and books. He retrieves his stock certificate from the Dream Mine, also known as the Relief Mine as it was renamed in 1961. 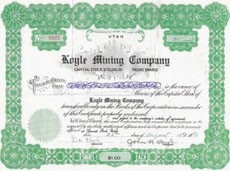 The stock still floats around nowadays, and since the creation of Hansen’s e-group, trading has gone through the roof. The last time stock sold on the e-group, it was priced at $25 a share, two dollars more than recently advertised EnergySolutions stock.

“It didn’t take long after I started the group that they’ve been selling and trading the stock, and now there’s very little left,” Hansen says. Since no new stock is being issued, buyers purchase directly from shareholders, and the company signs the stock over to the new owner.

Coincidentally, Hansen started the mine discussion group the night before the 9/11 terrorist attacks. Since then, membership has swelled from a handful of friends to around 990 members.

Interest from the e-mail group led Hansen to host a tour of the mine a few years back. When former mine president Dean Cloward arrived at the gates, he was astonished to find more than 100 group members.

“After we all came out, I saw this big smile on the president’s face when he saw the new generation,” Hansen recalls. “I think it clicked for him why we have the e-group.”


This Is How the World Ends
Today, the mine sparks more interest than it has for decades. Stockholders, believers and even the casually curious have found freedom to talk and share experiences from the anonymity of the Web-based e-group.

Since the very mission of the mine was to ready Zion for the tumult of the last days, signs of the end are the hottest topic of e-group discussion.

Koyle was cryptic about details of the final days, so current believers have their own theories. Scanning his notes, Hansen refers to a story told by follower Jesse Young: “The time of trouble will be ushered in by a financial crash. We’ll go to bed at night and wake up in the morning with no light, gas or heat.”

Hansen has a theory as to what could wreak this havoc.

“Electromagnetic pulse,” he says. “They say you could blast two of those over the skies of America, and that would literally fry everything. You could take down America, just that quick. The Russians have that capability. The only thing that would be left working would be hardened electronics that the military have.”

Koyle once predicted that before the end, Russia would invade Turkey for access to the Black Sea. The weekend of October 26 this year, stories broke about Turkey attacking Kurdish rebels in Northern Iraq. Since that weekend, 22 posts on the discussion group shot back and forth speculating what this might mean with regard to the end of the world.

According to one post: Now that Turkey has crossed the border and engaged the Kurds it seems to me that Russia is biding its time. Who knows how patient the Reds will be in watching what goes on there, but when they think the time is right they’ll invade Turkey for their water.

Another poster commented: The reason Russia attacks Turkey has more to do with our disabled condition, Conflict will start inside America over the loss of money power, greenbacks worthless, no power, no water, additional upheavals from nature as well as those brought on by collapse of dollar. And the attempted changeover to new currency, maybe the Amero. … The country reaps what it has become, a corrupt nation of wicked people turned from Christ and His teachings.

Hansen realizes this doomsday watch can become a morbid preoccupation. But he wants to be ready. “A lot of us have saved up supplies, I’ve got a ton of briquettes, propane gas, wind-up flashlights. If you don’t ever need it, fine, but if you do need it ...”