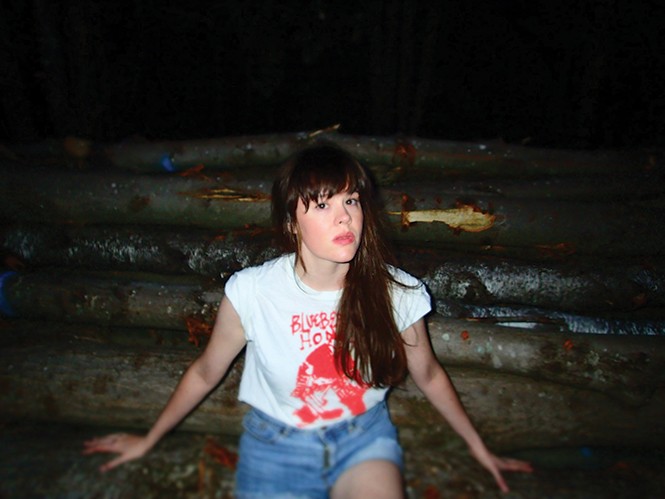 Ever since the psychedelic movement in music began, it has waxed and waned, always to re-emerge every few decades, when old timers begin to wax nostalgic, inspiring a new generation of practitioners, which adds its own wrinkle and keeps the genre fresh. The origins of psychedelic music are as various and promiscuous as any musical genre: in the poetry and idealism of '60s folk music, the soulfulness of the blues, garage rock's spontaneity and improvisatory bravado, and even in the surf rock's reverb and vibrato. Psych music's embrace of experimentation encourages inventiveness that incorporates additional genres and makes its influence even more profound.

Elisa Ambrogio, of Hartford, Conn., band Magik Markers visits Diaboloical Records Nov. 18 with San Francisco group Peacers, where they add their own spin on the genre. "When I think about psychedelic music," Ambrogio says, "I think about anything that was created for a certain kind of listening experience. Music for headphones—separation of sound, panning back and forth." She cites two of her favorite psych musicians as hip-hop artist Migos and electronic musician Holly Herndon, which demonstrate the diversity that fits under the umbrella of "psychedelia."

Peacers is the new group of Mike Donovan, formerly of Sic Alps. "They use a Fender Bassman amp, and they like The Zombies," Ambrogio says of her tour mates. Perhaps tongue-in-cheek, the quip is a nod to the genre's preference for old-school, vintage rock instruments and its reverence for traditional music of the genre. Peacers also features noted psych-rocker Ty Segall, of the band Fuzz.

Psych is a genre worth delving into for its experimental fervor. The canon of major psych albums, from Hendrix to the Who, is well known, but a number of key releases are more obscure, while revealing something integral about the nature of the genre. What follows is a highly subjective list of essential psychedelic discs.

Pearls Before Swine, One Nation Underground (ESP-Disk, 1967)
The late '60s/early '70s band of Floridian Tom Rapp and a changing cast of characters is an example of how some folk music started to morph into a more hallucinatory form. The album cover's use of Hieronymous Bosch's "Garden of Earthly Delights" hinted at the strangeness that came. Pearls Before Swine is also notable for late local folk hero Bob Moss's cover of Rapp's "Every Change Is a Release."

Love, Da Capo (Elektra, 1966)
The band Love is known for their 1967 psych-folk masterpiece Forever Changes, but you should get to know FC's predecessor, and not just for singer Arthur Lee's brilliant "She Comes in Colors" (which purportedly inspired both the Rolling Stones' "She's a Rainbow" and Madonna's "Beautiful Stranger"). Love is also said to have influenced both The Doors and Led Zeppelin.

The Soft Boys, Underwater Moonlight (Armageddon, 1980)
Ever since the Beatles, psychedelic music has been inextricably linked with the British Invasion. That was true for the '80s psych revival as well, when groups like Echo & the Bunnymen and The Teardrop Explodes made waves over here. Robyn Hitchcock was one of the most tuneful of the songwriters of the period, both solo and with The Soft Boys.

Bongwater, Double Bummer (Shimmy-Disc, 1989)
Bongwater—a duo comprised of actress-singer Ann Magnuson and Mark Kramer, producer of Low, Galaxie 500 and Urge Overkill—was psych music's head-on collision with grunge of the '80s. The '80s had its own fuzz merchants, like Mudhoney and Green River, but Bongwater paid tribute to the originals with its grungy covers of Gary Glitter's "Rock and Roll Part 2," The Beatles' "Rain" and "Love You To" and others. The psychedelic send-ups were in the don't-take-anything-too-serious tenor of the original times.

Magik Markers, Balf Quarry (Drag City, 2009)
Magik Markers is an example of the kind of noise rock that made Sonic Youth's early work a staple of the psychedelic genre; very early in the 2000s, they even opened for SY. The psych-rock value of distorting the senses was taken to extremes, but on Balf Quarry everything began to coalesce. Balf also overlapped into the freak-folk subgenre inhabited by Devendra Banhart, Animal Collective and Thee Oh Sees.

Circus Devils, Stomping Grounds (Happy Jack Rock Records, 2015)
Robert Pollard has digested seemingly everything he's ever been exposed to and used the influence to create his own singular musical voice. The name of his band Guided By Voices referred to the way everything from the Fab Four to The Who has influenced him. Circus Devils is the most psych and progressive of his output, a kaleidoscope of surreal characters like Stomping Grounds' "Sunflower Wildman," combining psychedelic tropes of wild nature and madness: "Off to the kitchen/ and sneak through the back/ don't let him hear you/ he hides in the cracks of dementia."

The patron saint of psychedelic music, Syd Barrett, went too far, ingested too much and was lost, never to come back. The music Barrett and others have created remains, returns every so often, and through it, we experience what they experienced and see what they saw.