A little initial friction didn't prevent the members of Gravity Castle from finding a creative collaboration. 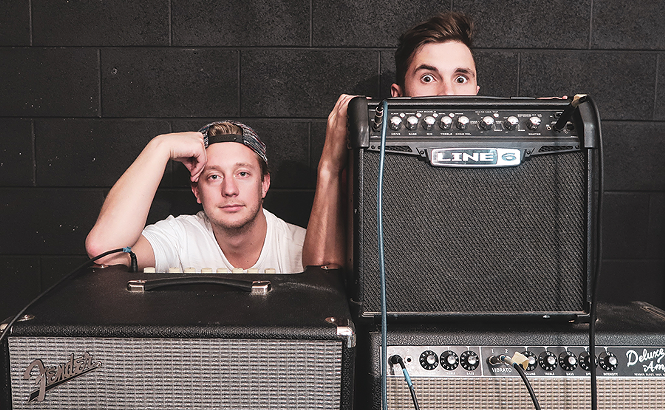 Utah County is known for many things as far as music goes. It's flush with musical talent and folks with a particularly "Utah" kind of ambition—folks who often fall on the folk music side of things. However, artists like Provo-based duo Gravity Castle prove that there are exceptions to that norm.

Although members Oliver Kersey and Gabriel Gledhill have backgrounds in indie rock, they've turned to making in-the-weeds, complex music more aligned with EDM, despite the fact that that's not really the sound du jour in their neck of the woods. But with dynamic pasts and varied creative approaches on their side, the two couldn't resist diving into something new and fresh, exploring their respective potentials in the process. The results so far have come in the form of two 2019 EPs, both with clean production and an approachability that hints at something glimmering in their future.

Gravity Castle (facebook.com/gravitycastlemusic) came to exist after the dissolution of a former band—the more indie-rock-leaning group Salt Valley—and after Kersey and Gledhill realized that their respective careers in music had left them with all the gear and experience to do something more technical. Kersey, who'd been working on his music production skills for a few years at that point, felt like it was finally time to give producing an EDM project a real college try. "I had some good producer friends and I always wanted to go towards this electronic route and I wasn't able to till I was able to produce on my own," he explains. "It's hard when it's all up in your head, unless you know how to actually put pen to paper, so to speak."

It wasn't just this aspect of Kersey's creative process that made the realization of an EDM project for the pair take a little while. Although Kersey and Gledhill had known each other for quite some time because of mutual friends—specifically, friends of Kersey's then-fiancee—the two didn't immediately take to one another. Kersey admits to not really liking Gledhill when they first met, but it was when starting up the group that would become Salt Valley that another member recommended a good bassist to him—Gledhill—that things changed.

Now, they both lament the mild friction that kept their musical trajectories apart for so long. Gledhill says, "When we were finally brought together musically, we wondered why we had waited so long, and now always wonder hypothetically where we would be now if we started this journey together four years earlier!"

What they have so far is those two EPs, Beginnings and Introspection, the latter being one they worked on for the past six months. They contain all the bold snap and smooth sensuousness that always prop up the best of EDM music, with "Stay" and "Roots" being the truly emotive standouts on Introspection, and Beginnings's "I'm Sorry" being the kind of head-in-the-clouds electro pop that keeps them from feeling like a moody act.

Moving into the broad territory of EDM to craft these songs has been the result of a long, long time making and listening to music for both of them. While Gledhill describes Kersey as a kind of "independent acoustic guitarist," Gledhill's background is classical; he played violin in his high school orchestra, and according to Kersey at least, he's got chops with guitar, cello and keys as well. Their influences vary, too, but move in similarly alternative realms. "I'm 29, so my love for music starts with Coldplay's first album—that type of genre, those different kind of late '90s and early 2000s bands. That's really where my first memories of recognizing songwriting and things like that [come from]," Kersey says. Meanwhile, he lists Matt Kearny and Jon Bellion as influences for Gledhill.

"We had both studied music our whole lives and loved it. We'd put in the time to develop songwriting abilities, as well as invested time and money into the necessary gear and knowledge to produce with it," Gledhill says of what made them decide to finally go for it—and when they did, their artistic working compatibility clicked. Finding a middle ground in mainstream acts like OneRepublic, Kersey says that the two don't feel any restrictions on their music. This makes sense, as EDM—like so many genres—is really just such a wide canvas. "I don't even know if EDM's the right word," Kersey says of the sound they've developed. "One of my producer buddies I still work with quite a bit calls us indie electronic. Some [songs] I'd say are very pop, some are kind of house electronic, some are kind of indie electronic. I just tell people, 'You listen, and you make your decisions.'"

Next up for the band is getting out of Utah County—which, though it's their home base and though it's a supportive space for artists of all kinds, is also not a place they want to "paint themselves into a corner," as Kersey puts it.

"We really want to branch out and hustle to get our music heard," he explains. "We spent six solid months getting our music right, so let's put the same effort into getting in front of people."