Vote Dean for Sheriff
Stephen Dean doesn't look like a typical militia member. He looks like he might be going to the annual hippie Rainbow Gathering (that he said he wanted to attend) rather than running firing drills in the desert.

It's unclear how many recruits are in the People's United Mobile Armed Services. When asked, Dean merely points to the group's Facebook page, which has a little more than 200 "likes." Also, Dean—under the name "Captain Wanderlust"—appears to be the only one posting to the page.

Anyway, patriot groups are thriving in the country. The Southern Poverty Law Center recorded more than 1,000 groups in 2013, including 240 militias, organized to oppose the so-called New World Order. Today, acronyms are cheap.

Back at Dee's Restaurant, Dean explains how he decided in 2014 to run for sheriff in Millard County. (While not allowed to carry a firearm, a felon can be sheriff in Utah).

"That's mostly just to rock the boat," Dean says about his write-in candidacy. Although he does plan to campaign—to "stir things up," to "get my message out."

His message? That catch-all charge of corruption: corruption of the police, the prosecutors and the politicians. But especially corruption at the local level, he explains—and, most especially, corruption in the town of Delta, Utah (population 3,500).

When asked for an example of this corruption, he doesn't hesitate. As he jumps into the story, the listener gets the feeling he's told it many times before.

He talks about that time in Delta when cops pulled over his friend, who was driving Dean's van at the time, on suspicion of a suspended driver's license. Now, how did this cop know his friend had a suspended license, Dean wonders, which his friend indeed had.

"They took him to jail. Why not just write him another ticket?" Dean says.

His flier reads in part: "A public notice to the citizens of Utah from the People's United Mobile Armed Services: What can We the People do when our public officials, police, prosecutors and judges violate the Constitution and purge their oath of office? We the People create a grand jury to hold them accountable. ..."

The yellow sheet of paper named Dean as "Chief Captain" of the militia and provided his phone number. The "grand jury" to which the flier refers is the means by which a group named the National Liberty Alliance (NLA) and its supporters hope to counter what they see as unconstitutional laws and prosecution in the country.

A brief introduction to NLA common-law grand juries: "Common law" refers to law created by custom and precedent rather than statutes. It comes from the English legal system. A grand jury judges the validity of an accusation before one is sent to trial and prosecuted. What the NLA wants, and what Dean advocates, is the creation of common-law grand juries to override laws they see as unconstitutional, as well as to punish those enforcing them.

They want to create "We the People" courts and use public courtrooms for the trials. "'We the People' paid for those freakin' buildings," Dean says.

They have sent affidavits, stamped by NLA officials, spelling out these demands, to all 94 U.S. District Courts.

Dean explains that the only constitutionally compliant court is a common-law court. And a major maxim of this law is that prosecution requires an injured party. Safe to assume, NLA's version of a common-law court would not prosecute some forms of statutory rape or bullet jewelry. He believes it would have saved him. And he believes it will give him restitution.

Dean thinks the militia and grand-jury calls caught the authorities' eye. Or maybe he was coming off as a meth dealer.

He says he had made friends with local Delta kids who come to the hot springs where Dean holds a small artist gathering called the Pantheion [sic] Festival. The kids had a house—what Dean describes as a meth house when he first arrived—that they dreamed of turning into a hostel for the festival, once the meth was under control. And there Dean was, coming and going, in his white van.

"I don't know if you're familiar with meth," he says, "but apparently, it's quite powerful. ... I won't go there. ... I prefer the natural medicines."

The police found marijuana in Dean's van. But to Dean, that is "sacramental herb." True story: He is a card-carrying member of the Okleveuha Native American Church. He says he was using his medicine man knowledge to get the Delta kids off hard drugs.

"Sometimes ... an Ayahuasca ceremony can totally reboot your system ... or a huge hit of DMT can just like—Boom!—just shut off the computer and power it back up again," Dean explains. He has the thousand-yard stare of someone who has seen things.

The president and principal medicine chief of the Okleveuha Native American Church, Man Found Standing, provided a detailed letter to the court in Dean's defense:

"As a medicine man, all of the plants, herbs, essential oils, minerals, animals, and so forth that are used by Stephen Dean in traditional Native American Ceremonies fall under the protection of Native American Free Exercise of Religion Act (AFERA), Religious Freedom Restoration Act (RFRA), and other acts of Congress pertaining to Native American Religion, Pre-Eminent Treaty and the U.S. Constitution."

Dean later sued prosecutors of the town of Delta for $150,000, citing religious discrimination (the case was thrown out June 16, 2015).

After the cops found Dean's "sacramental herb," Dean felt the corruption of the police and legal system beginning to stack up. First, Dean sees the requirement of a driver's license when the driver is not using his vehicle for commerce restricts his freedom of travel (there is a small movement in the United States, including Dean, who believe that requiring a driver's license for noncommercial vehicles is unconstitutional). 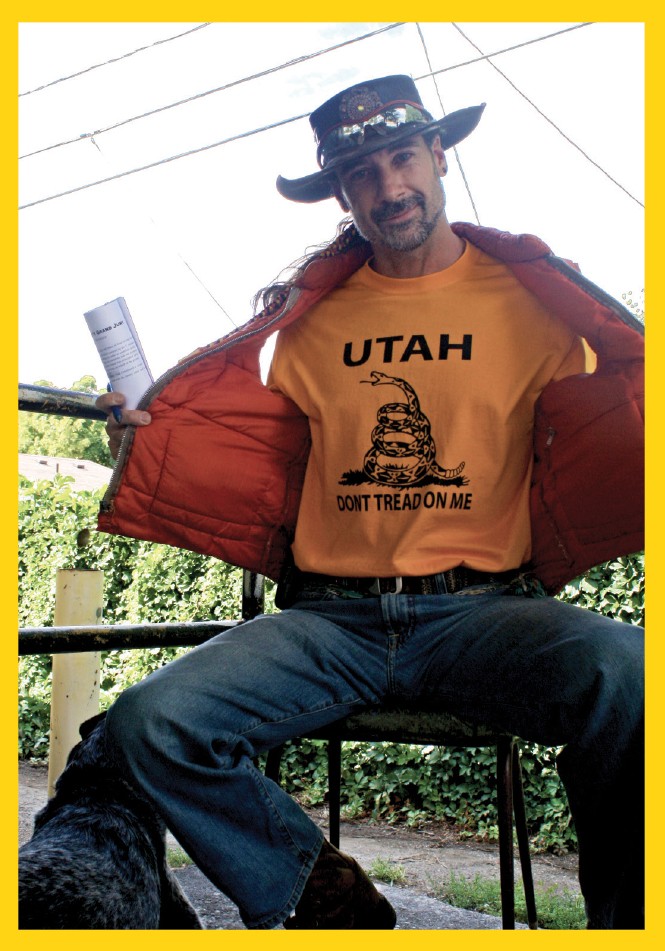 Then, when his van was searched without a warrant referring to the specific drugs that the cops hoped to find, Dean believed it violated his Fourth Amendment protection against unreasonable searches.

Finally, by confiscating his medicine-man card and his marijuana sacrament, Dean said prosecutors infringed on his First Amendment freedom of religion.

He later attended a meeting in Delta where candidates were introduced for the upcoming election. Unsure of his intentions, he waited until the end of the meeting, stood up and asked the date for the election. He was still mad about what had happened to him: spending more than $500 to get his van out of the impound lot and losing his medicine-man card. He told the room he was going to run for sheriff. Dean says Millard County Sheriff Robert Dekker, who happened to be in the room, offered to get him the application.

"I say, 'OK, and while you're at it, while you're getting me that application to become sheriff ... why don't you get my medicine-man credentials out of evidence and give them back to me?'" Dean says.

The clerk for the Millard County court, Marki Rowley, said she recalled him standing up in the meeting and announcing his run. But she said he never filed the paperwork. The NLA message boards still refer to him as running for "Common Law Sheriff" in Utah.