People's Court
Later that summer in 2014, Dean is outside a Salt Lake City building he says is his studio. When he is not busy with militia-type activity, he makes art and music. He builds things like a greenhouse fueled by a hot spring. He raises chickens and goats.

"When the dollar does crash, ...we need to be able to barter," he says.

The building looks to be boarded up, and he says something about a slumlord owning it, but doesn't go further. He sits on a chair by the door and starts to explain why Salt Lake City chief prosecutor Padma Veeru-Collings is "impersonating a public servant."

He refers to a scuffle that he had with a friend near Liberty Park. The cops were called as he was packing up his van to leave for the drum circle.

A cop was "asking us for ID, so I asked him for his ID," says Dean.

Dean was charged with disorderly conduct—which is how he developed his interest in the Salt Lake City prosecutor. He went to the City Recorder's office, and asked for Veeru-Collings' oath of office but came away empty-handed.

It's true: The City Recorder's office, where oaths of office are usually kept, for some reason does not have anything on file for Veeru-Collings. According to a records clerk/technician, in her 22 years at the recorders office, such things have occasionally happened: "Sometimes, they just don't send them to us," she says.

In a phone call, Veeru-Collings verified that she had, in fact, taken the oath of office. 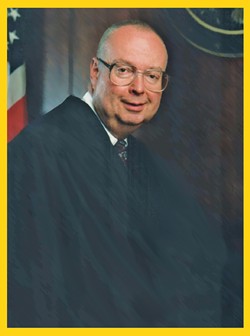 Still, Dean is impassioned, believing such things invalidate the charges he is fighting. Convinced the misplaced document somehow has greater importance beyond a mere bureaucratic filing error, Dean says, "So, actually, Padma Veeru-Collings has been impersonating a public servant, the chief prosecutor of Salt Lake City Justice Court for one year, three months and seven days. Since she was hired. ... That alone could make all of the prosecutions under her for that length of time null and void."

"Null and void" is more patois from the NLA. It means "unconstitutional."

These are foreign courts, Dean says of the courts in which he continues to find himself. War courts. Admiralty maritime law courts without jurisdiction.

"That's why the oath of office is so important. When they take the oath now, it brings them back ... under the Constitution," he says.

But this "Padma thing" is minor compared to Judge Dale A. Kimball, he continues. 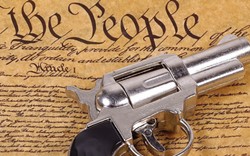 Dean says he found himself in the chambers of Judge Kimball, federal judge of the U.S. District Court for the District of Utah, holding an affidavit requiring Kimball's presence at a citizen common-law grand jury. He was amazed he had made it through security, cell phone and all, simply telling court workers he had documents to deliver.

The affidavit, created by Dean, accused Kimball of violating Dean's constitutional rights when he was convicted of carrying ammunition while a felon. Judge Kimball wasn't present at the time of Dean's visit, and he had no idea Dean was in his chambers, says Dean. (The federal courthouse has since moved to a new building with tighter security.)

Dean made his way through a door of the judge's chambers to the courtroom where he thought Kimball was presiding. When he interrupted the hearing and announced he had something to give Kimball, he was swarmed by marshals, and a judge was evacuated from the courtroom. Dean says he later just mailed the documents.

Judge Kimball relayed through his court clerk that he had no recollection of the incident.

In early April 2014, Eugene Richardson, described as a fellow patriot by Dean, sent similar documents by certified mail notifying a judge of St. George's 5th District Court of Utah about his constitutional transgressions and declaring Richardson's intent to form a grand jury.

A few weeks later, Richardson received a response from Brent Johnson, general council on behalf of the administrative office of the court. It read, in part:

"You seem to be operating under the assumption that anyone can form a grand jury. This assumption is incorrect and leads to the conclusion that you believe this country can be operated through chaos and anarchy. ... If you establish a competing system, based on your disagreement with elected leaders, then another group of citizens could disagree with your states and establish their own competing system, leading to anarchy as numerous competing groups are established."

Say what you will, NLA supporters know their 19th century philosophers. Dean writes a Benjamin Franklin quote on a piece of paper toward the end of the interview: "Either write something worth reading or do something worth writing."

Making of a Militiaman: Part II
So much in the modern patriot or common-law or constitutionalist movement is abstract. The meetings and YouTube videos describe esoteric interpretations of the law: The government will, any day now, take our guns. Martial law will, any day now, be instated. Those orchestrating formation of the "New World Order" are always hidden.

But Stephen Dean is a real person. He faces real consequences. His suffering at the hand of the government, mostly brought on by his own actions or defiance, is real. For those keeping track; he is a convicted sex offender with subsequent convictions for firearm and drug possession. And it's not over yet for him.

There was an alert made on the National Liberty Alliance website at the end of March 2015: "Emergency! Emergency! Emergency! Re: Steven [sic] Dean, NLA Utah leader & member arrested ... please do flood the jail with phone calls demanding Steven Dean's immediate release."

The post provided Dean's booking number and various phone numbers for the jail. The rumor was that it was an FBI sting. Agents had befriended Dean and tricked him into target shooting. At least some of that is true, according to court documents.

Dean was arrested for unlawful transport of firearms, including a shotgun and an assault rifle. The evidence the U.S. government was planning to present to the court included audio recordings dating back to September 2014, video labeled "footage of field shooting," and FBI reports. It's likely he was being monitored by federal agents for nearly a year.

After spending a few months in federal prison, Dean was released on parole on June 16, according to court documents. One condition of his parole is that he may not associate with any groups who want to overthrow the United States.

Last year, Dean talked about how his political work at this point was peaceful.

"This is the peaceful revolution. This can work. The common-law grand juries in every county. Not just Utah, but the entire country," he said.

He seemed eccentric, nonthreatening and genuinely hopeful—although it didn't take much prodding to have him spell out what might happen if government officials across the country do not, in fact, show up for extrajudicial court hearings.

"If this doesn't work, it will come down to what happened at Bundy's ranch ... but shots being fired," he said.

He said that, someday, he would have his firearms back, when enough people are there to back him up on it. There just aren't enough right now. And, he said, he didn't want to be put back in that hole. The next time he goes in, who knows who he will be when he comes out.

"I want peaceful revolution ... but if it can't be peaceful, I will arm myself with a firearm. I will shoot back after being fired upon. I won't shoot first," he said.