A double major in history and political science at the University of Utah. 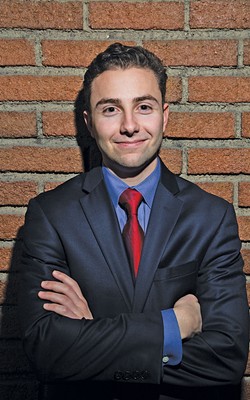 Chris Coombs is a double major in history and political science at the University of Utah. He's been heavily involved in politics, including the most recent election cycle, and aspires to be a lawyer with a dream job being the Chief of Staff to the President of the United States. He has worked as a student ambassador in marketing and outreach with the Hinckley Institute of Politics at the U. Coombs has interned on four separate occasions in the political circle: He worked in Sen. Orrin Hatch's office, the Attorney General's office, interned at the Utah State Legislature and in Washington, D.C., with a lobby firm.

How did Donald Trump win despite his unconventional campaign?
I think everyone would agree that it was an unprecedented and historical election right off the bat. People need to keep in mind that he was an unconventional candidate from the very start. He never had any governmental or military service and is the first person to be the president without those two backgrounds. Donald Trump, from the very start, ran his campaign as a business. He defied the conventional wisdom of campaigning. It's interesting to see how much money he spent on the campaign versus Hillary Clinton and the difference in the hundreds of millions of dollars, as well as the lack of ground game he had, and really defying everyone along the way—Democrats, Republicans and even the Pope. Even if you look at what specifically he spent his money on—he spent it on hats, per se. When you think of a Trump supporter, you think of someone wearing a "Make America Great Again" hat. ... He really emphasized communication and marketing. Another huge component of his success was the media. Regardless of which site or avenue you looked at, there was always some sort of tilt toward Hillary, and he overcame that through social media.

Who got it wrong: the pollsters, the media or general complacency in thinking Hillary had the election in the bag?
If you look at all of the empirical evidence—the pollsters, the media—they were saying Donald Trump wasn't going to win and that Hillary was expected to win by a landslide. Nate Silver gave Trump the best chance to win on his site FiveThirtyEight, which was 30 percent of winning. On the other hand, you had the trends, which is something I hold more sacred. If you look at the last congressional midterm elections, the Republicans dominated. They dominate on local and state governments. If you look at Brexit and what's occurring in the global climate, you have the rise of nationalism and right-wing movements across Europe and other places. So I really think the trends favored him, and at the end of the day, that was more reliable than the empirical conventional wisdom. You saw his crowds and the thousands of people that would line up, and then Hillary would struggle and need Jay-Z or Beyoncé there. It didn't add up. You had the norms on one hand, and your gut feeling on the other.

It can be argued that there's never been a great radical president; great presidents are more centered and reach across both aisles. What does Trump have to do to reaffirm his commitment to all Americans, not just the ones who voted for him?
I'd like to think he's transitioning out of campaign mode and into government mode. You're starting to see it: He's toned it down on Twitter, he's not saying as much or getting into arguments with people. He wants to be about coalitions and be a well-liked, productive president. This goes back to the idea that he wants to master the media and be a balanced president. I think if you look at what he wants to do policy-wise, he's softened his stances since he's become president. A name being tossed around for Secretary of the Treasury is Democrat Jamie Dimon, the CEO of JP Morgan. This week, Trump said he wants to reconsider Roe v. Wade, but also that same-sex marriage is the law of the land. No other candidate has divided those sort of liberal platforms, so we'll see what happens.

Trump has degraded certain minorities. What does he have to do to reassure them that the national government won't discriminate these groups?
I think he needs to be inclusive. I would recommend that he holds some sort of major event or speech where he sets the record straight on his views on religious, racial, LGBT and minorities. Basically, he needs to get everyone on the same page before he's inaugurated so people know what they can expect from a real Donald Trump candidacy.

What can we expect from a Donald Trump presidency?
We can expect change. I think he and Barack Obama are a lot alike: They rose to power with the same sort of sentiment or motto, providing change to middle America or the forgotten America. Obama's coalition is very much similar to Trump's coalition, especially with those swing states or those states that are traditionally Democratic strongholds like Michigan or Wisconsin. I think Donald Trump will be a president unlike any that we've ever had before. He's more concerned about building from the ground up, so I think there's going to be a lot more attention on the domestic level and maybe less so on the international level like the Obama administration.