The Walk of No Shame

Rachel Jensen, SLC SlutWalk director, talks about rape culture, victim-blaming and why it's important for Salt Lakers to get involved in this year's big protest. 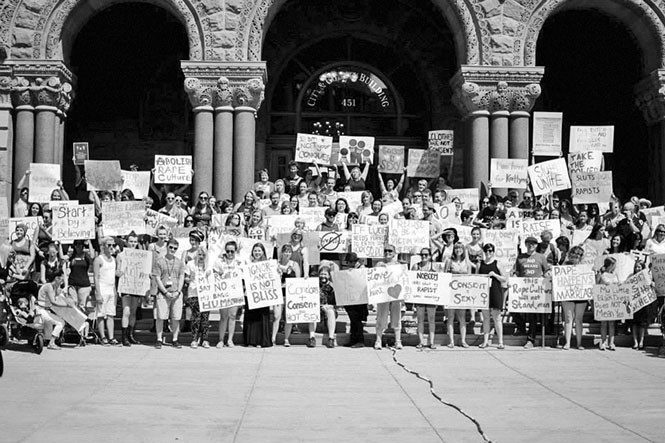 In 2011, a police officer in Toronto, Canada, visited a nearby law school to talk about campus safety. "You know, I've been told not to say this," he told the small group of students. "However, women should avoid dressing like sluts in order not to be victimized." Fueled by outrage at these blatantly misogynistic statements, an international movement called SlutWalk began. Salt Lake City's iteration formed just a few months later, and has since grown faster than expected. This year's SlutWalk, called "The Walk of No Shame," takes to the streets this Saturday, Sept. 24 at noon, starting at the Salt Lake City and County Building. Rachel Jensen, recently appointed as director, predicts the turnout to be the highest ever in Utah, and maybe even the country.

What made you want to get involved in SlutWalk?
I've been involved since the beginning in 2011, and everybody had been pretty outraged at the same time with what had happened with the Toronto officer's statements. ... So what happened to me was that last summer, a friend of mine had gotten sexually assaulted by somebody who I don't personally consider, but I guess other people consider, a 'celebrity,' and it kind of got everybody involved in this situation that the local comedy community joined forces to call the attacker out publicly, and it went viral in just a couple hours. The press had picked it up, Twitter had picked it up, it got all over Facebook, and we were called liars for calling this guy out as a rapist ... And it kind of brought everything to the forefront. We were facing this huge attack by rape culture in general, this society that we were a part of was perpetuating this culture of victim-blaming and slut-shaming, making the problems that people are facing, that she had faced this horrific event, just absolutely worse. How can people who had already been attacked want to go to the police, want to go through the whole process of going through the legal system, if this is the kind of backlash they're going to face, and put their friends and their family and close-knit community through this? It was absolutely horrific, and it made me want to do more and try more rather than curl up into a corner and cry. I wasn't going to let 13-year-olds with Twitter and Instagram accounts threaten my safety and make me fear for my life, you know? I was going to fight back. So when the director position opened up, I did want to do something more, and I wanted to use my experience and use my platform as a writer and as a comedian, and my connections, and make this a bigger thing. If we can make a post about a stupid wannabe celebrity go viral in a couple of hours, then what can we do for SlutWalk?

Why do you think it's particularly important for Salt Lakers to attend this year?
I think, especially this year, having it be an election year, it's more important than ever. If anybody is paying attention, I think people should be aware and outraged with what's going on with Bill Cosby, with what's going on with Brock Turner—you know, the swimmer who spent three months in jail for raping an unconscious woman behind a dumpster at a college party—with what's going on college campuses in Utah and across the nation not helping students report attackers and not doing enough to stop rape on college campuses, and what's going on with BYU, in our own state, in our own home turf, punishing students for reporting their own rapes as Honor Code violations. You know, we are in a position right now, especially with the election year, to change these things—even if you're just voting out judges, even if you're voting for new school board members, even if you want to run for school board—then you can make a difference. But we are electing a new governor this year, we are electing a president this year. We can do so much more to change the landscape we're dealing with culturally and socially in this country.

Why did you guys decide to call this year’s event “The Walk of No Shame”?
There has been some public backlash against the name SlutWalk. ... some concern that the name itself is damaging to people who have been survivors, because that was a word that was meant to do harm, and that’s exactly why that Toronto officer used it in the first place. It’s not intended to be something nice to say to somebody. And that’s why we originally took it back. However, we took it back and we made it our own, and we became a global organization and fought against that conservative thinking that made it part of that rape culture. And, contrary to popular belief, it’s something that has happened in really conservative areas like Atlanta, like Israel, like India, and it’s sort of this global partnership. It’s not just isolated in Utah, or in Toronto. We’re all over the place. And we want to stay connected with all of our sisters that are going on across the globe, so we didn’t want to lose that connectivity. But we also want to let people know that we want them to feel comfortable coming out to the event, and we don’t want people to feel like we didn’t hear their concerns. We don’t want people to feel like they have to succumb to any of those uncomfortable feelings all over again. … So we re-branded the event specifically, as the “Walk of No Shame.”

And it was kind of twisting that whole rape culture around on its head. You leave a partner’s house after a night out on the town and a hookup, and that was always deemed, you know, “the walk of shame.” Whether or not the hookup was consensual, or, unfortunately, if it was non-consensual, everybody kind of felt like, you’re being shamed if you’re sexually active. And we want everybody to feel like, no matter what’s happened in their life, you don’t have to feel the shame. So, this is a shame-free zone. ... Whether it’s something you are proud of because you are fully in control of your consent and your sexuality--then you have no reason to feel shamed by society; own it; be proud of who you are--or whether, you feel ashamed because, you unfortunately are a survivor of sexual assault; that was something that you had no control over; it was not your fault, so you don’t have to feel ashamed for that. And we want to take that shame away, and give survivors empowerment.

What's it like to participate in a walk like this? What would you say to someone who wants to go but is a bit hesitant?
It's powerful. It's absolutely powerful ... more than anything, just being part of an experience where you get to be with, really, an army of people ... marching with a group for something that you believe in, and just, between Point A and Point B, how much it really feels like you've changed your life. If you're a survivor, and you've never come out and really stood up and walked before, and walked with a purpose, it's really life-affirming ... and I think that our grandparents and our grandparents' parents had experienced this all the way back through the civil rights movement, or before that, where people stood up and marched and fought for their right to vote, for their right to exist and to be part of society. We're still doing that. We're still fighting for our right to exist in a peaceful world where we don't have to feel like we are to blame for our own sexual assault. And it's absolutely moving to know that by the time we leave the city building and get to the Capitol steps, how many lives will change—with the people we're marching with ... with the people we pass on the street—and we've moved as a group, and done something together that is just absolutely life-changing.