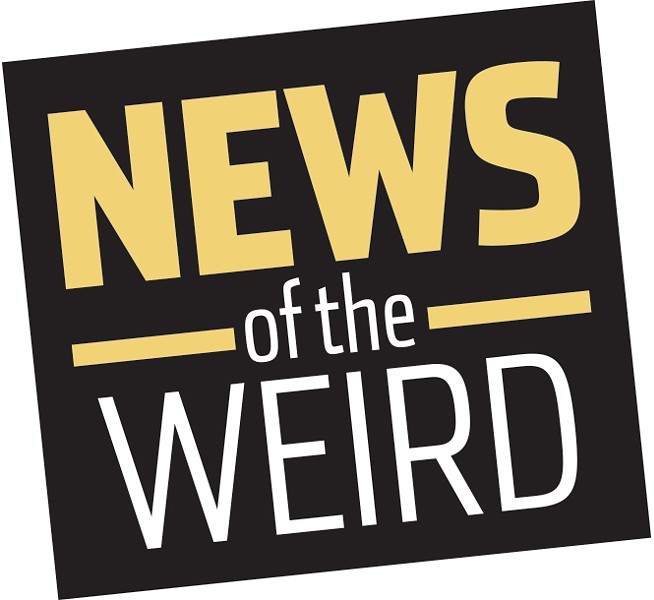 Fun at Work
Bill Bailey (a former nine-year employee of the water-irrigation network near Grand Junction, Colo.) was awarded unemployment benefits in December for being wrongfully fired. The company claimed Bailey was insubordinate and that any complaints he had were merely because he is "too sensitive" to workplace "fun" and unable to "forgive and forget" his supervisors' team-building spirit. According to an administrative law judge, the "fun" included, among other things, detonating unannounced, ear-splitting PVC "potato guns" (using golf balls and other items) on the job and Bailey's boss placing his own feces in a bag inside Bailey's lunch pail. (At one point in the hearing, during the boss' mirthful, carefree descriptions of the "fun," the judge felt the need to advise him of his Fifth Amendment right.) Following the judge's decision, Bailey's two supervisors resigned.

Questionable Judgments
The Agony and Tediousness of "Peeling": The Canadian supermarket chain Sobeys has recently been selling pre-cut avocado halves, sealed in plastic packages. Said a spokesman, the product "eliminates the guesswork ... if you are not familiar with peeling and seeding a fresh avocado." Also, recently, Whole Foods began selling peeled mandarin oranges, sealed in "recyclable" plastic, at $5.99 per pound (but withdrew the product in March, with an apology and promise to sell the oranges only in their "natural packaging: the peel").

The Continuing Crisis
The Most "Florida" Story: State officials have notified retired pro wrestler Mary Thorn of Lakeland that, according to the law, her pet alligator ("Rambo"), age 15, having grown to 6 feet in length, may no longer be kept at home unless she provides at least 2 1/2 acres of roaming space. She made a public plea in March, warning that confiscating Rambo would kill him, as he is super-sensitive to sunlight (having been raised inside her home) and must wear clothes and sunscreen when outside (though Thorn pointed out that he is "potty-trained" and wags his tail when needing to answer nature's call). At press time, the investigation of Rambo was still ongoing.

• The Most "Georgia" Story: David Presley (of Walton County, about 40 miles from Atlanta), 32, for some reason attempted to blow up his riding lawn mower in March—by placing three pounds of the chemical mixture Tannerite in it and then shooting the mower with a semiautomatic rifle. Although he was standing 30 yards away, shrapnel still hit him, severing his leg just below the knee.

• The Most "Canada" Story: Ms. Philicity Lafrenier, 25, was charged with several break-and-enter and theft crimes in March in Prince George, British Columbia, after leading police on a half-mile chase as she made her getaway on an ice floe on the Nechako River. When police caught up, she attempted to dispose of items she had stolen (even though still on the ice) by burning them in a small fire, but an officer and a police dog jumped in the water to subdue her.

Can't Possibly Be True
"Wall of Sound," Updated: Police, finally armed with a warrant after months of neighbors' complaints about loud music, raided Michael Baker's small one-bedroom apartment in Croydon, England, in March and confiscated 34 loudspeakers that allegedly Baker had been using at high volume at "all hours." After entering the home with the aid of a locksmith, police left Baker with only a CD player and a pair of earphones.

• Nicholas Ragin finally got his conviction overturned in March, but it took 10 years before the U.S. Court of Appeals declared that his "right to counsel" had been violated because his lawyer slept during various parts of Ragin's conspiracy and racketeering trial. (His sentence had 20 more years to run.) One juror later recalled that lawyer Nikita Mackey slept "almost every day, morning and evening" for "30 minutes at least." Once, according to court documents, after the trial judge called Mackey's name loudly, only belatedly getting a response, Mackey "jumped up and sort of looked around and was licking his lips ... and looked sort of confused and looked around the room." (The prosecutor said she intends to retry Ragin.)

New World Order
In March, Foreign Policy magazine noted that someone had created a "hot male migrants" account on the photo-sharing application Instagram: "Someone is going through photos of migrants and refugees, saving ones of men thought of as hot." (Many of the men, of course, have survived harrowing journeys and even lost friends and family members while fleeing Syria and other war-torn lands. Wrote one Instagram user, of a man who had turned her head, "He's gorgeous. Am I going to hell for thinking that?")

Bright Ideas
North Carolina State University scientists, in a "proof of concept" study published in March, claim they have found a promising alternative for eliminating certain infections—even when no known antibiotic will work. The solution, the researchers write, is to genetically modify maggots (which are well-known to feed naturally off of infected tissue) to gobble up the infections and release, as "waste," human growth hormone (as they showed in the study could be done with a strain of green bottle fly maggots).

• Felicia Burl, 33, who crashed her car (killing her passenger) after running a red light, fled on foot and later tried to foil DNA evidence against her to avoid charges. While in lockup, Burl, with a 29-conviction rap sheet, knew a mouth swab was upcoming and tried to contaminate it by—as police later learned—having two other women spit into her mouth just before the test. She was convicted anyway, and a court in Stamford, Conn., is expected to order a 10-year sentence at Burl's next hearing.

Least Competent Criminals
Massachusetts state troopers initially found a few drug items in a search of the vehicle of Carrie Tutsock, 24, at a traffic stop in March along Interstate 91 near Hatfield, Massachusetts, but Tutsock and her two companions proceeded to worsen the situation. The troopers seemed satisfied with finding three drug pipes, a couple of syringes and several baggies of drugs, and began to write their report as a "possession" case, but en route to the state police barracks, a trooper said he overheard one suspect whisper to another, "I don't think they found all the stuff in the car." The police searched it again and this time found three digital scales with white residue, along with another 230 baggies of heroin, and the charges were upped to "intent to distribute."

Recurring Themes
Convicted triple-murder inmate Kon Georgiou, housed in Australia's Goulburn Jail, was charged in February with hiding a cellphone in his rectum, but managed to hold out for 12 days (almost 300 hours) before finally "releasing" the evidence. Guards, certain it was a phone on the X-ray (and not the residue from recent surgery that Georgiou claimed), had confidently resisted "going in" after it.

• At an estate sale in Rehoboth Beach, Delaware, in February, a couple in Wilmington bid successfully on Delaware license plate number "14," which went for $325,000. According to WCAU-TV's report, paying exorbitant sums for low license plate numbers "is a Delaware thing" (and has been mentioned in News of the Weird previously).

Thanks This Week to Neb Rodgers, Darren Monaghan, Thomas Graham, Thomas Wyman, Larry Neer, and Pete Randall, and to the News of the Weird Board Editorial Advisors.