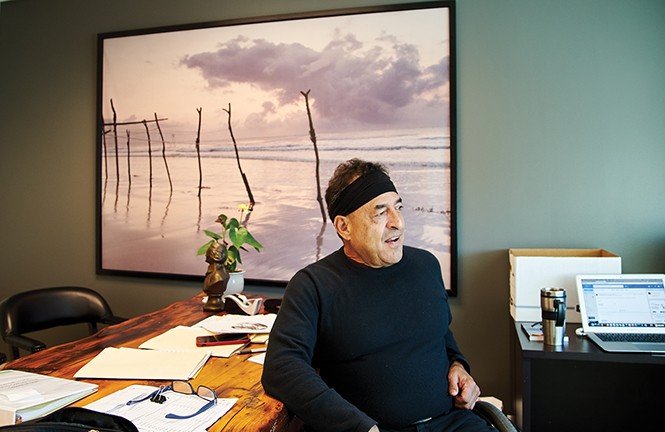 Danny Quintana is nothing if not lofty. The practicing attorney has taken on the U.S. Army, counseled Iraqis who he says plotted to assassinate Saddam Hussein, and fought for Native Americans to be able to continue sacred sweat-lodge ceremonies.

Outside of the courtroom, he's tasked himself with saving the ocean's dwindling fisheries—that's when he's not writing and publishing books or delivering wheelchairs to Mexico, Afghanistan or Haiti. He also has been known to organize public forums aimed at generating sharp, thoughtful ideas that shift policy and perception.

But he's ready to retire from public life, he says. That is after one final event, of course. Quintana's swan song is an attempt to improve America's immigration system.

"I, personally, believe we can solve the immigration problems right here, right now," he says, sitting in his 10th floor office in a downtown high-rise.

He's assembled a panel from the legal community with experience in immigration cases to start a dialogue. They'll speak and listen to attendees' ideas and questions at 5:30 p.m. on Thursday, Oct. 5, at the University of Utah Quinney College of Law's moot courtroom. The discussion is titled, "What are we going to do about immigration?"

Quintana has some ideas of his own: "The DACA kids, just give them visas," he says. "Give them visas; leave it at that." Easy enough, but he has grandiose suggestions, too. The North American Free Trade Agreement, for example, could be modernized, he says, to look more like the European Union—sans the common currency—"where with your visa you can work, travel, study, open a business in the three treaty countries."

As Quintana sees it, the populous can either trust that Congress will offer up legislation or citizens can supply ideas and pressure their senators and representatives to run with them. "Usually, if you do the opposite of what a politician is suggesting, you're making the right decision," he says.

Along with representing many immigrants throughout his career, Quintana says he relates to their plight on a personal level. His Spanish ancestors settled in New Mexico long before it was claimed by the U.S. When he moved to Utah around age 8, the differences separating him from the mainstream culture were stark.

"I relate to the immigrants. I come from a small farming village in New Mexico. I grew up speaking a different language, practicing a different religion, I have dark skin and faced the brutal racism they endure," he writes in an email, adding, "I have been called a 'nigger,' spit on, and had to face violence growing up in Utah. I have had people leave notes on my vehicle 'foreigner go home you do not belong in my country.'"

A key element of Quintana's goal is to keep the immigrants' humanity in the forefront. At the conclusion of Thursday's event, he intends to draft a report to send to Sens. Orrin Hatch and Mike Lee, both R-Utah.

The senior senator has tried to pass legislation to protect people who were brought to the U.S. by their parents—children who, while not citizens, have lived their lives as if they were and have little to no connection with their country of origin.

"Listen: I'm tired of this problem," Hatch said last week during a press conference in Washington, D.C. "I think we have millions of brilliant, brilliant young people who can add a great deal to our country. We need a permanent solution to this problem and not just keep kicking it down the road."

Cracking down on illegal immigration was a cornerstone of President Donald Trump's campaign and included building a 1,900-mile wall along the southern border. More recently, he threatened to rescind the Deferred Action for Childhood Arrivals program and kicked the responsibility of passing protections back to Congress. Since then—and in the face of mounting criticism—he tweeted that no one who applied for DACA protection will be removed from the country in the six months that Congress has to pass a bill.

DACA aside, the new administration has already implemented changes to U.S. immigration policy, according to attorney Adam Crayk, who practices at a firm that specializes in immigration cases and was invited to speak as a panelist at Quintana's event.

Crayk says that during the Obama administration's second term, the government prioritized deportation for undocumented immigrants who were deemed a threat—those who had been convicted of a violent crime, for example. Otherwise, law-abiding immigrants who did not have any disqualifying offenses were mostly left alone. The Trump administration, on the other hand, has broadened that net and given Immigration and Customs Enforcement agents considerable discretion to determine whether someone poses a safety concern.

"You could subjectively determine anything you wanted as being dangerous," Crayk says.

Recently, a man had gone out hunting rabbits with his son, he continues. Legally, the man broke no state law related to hunting, but as an undocumented person, he is not allowed to possess the gun. Local prosecutors cut him loose, but the federal government picked him up for illegally possessing a firearm.

Kent Davis is a local prosecuting attorney who previously worked for the Department of Justice at an immigration detention facility in Arizona. What many people don't realize, he says, is that immigration proceedings are civil rather than criminal. This means that in most cases, immigrants in the system are not guaranteed the right to an attorney.

And expecting an immigrant to be able to navigate an expansive law that even baffles attorneys, no less laypersons, is ludicrous.

"The Immigration and Nationality Act is extraordinarily complex and voluminous," he says. "It took me the better part of a year to wrap my head around it."

Davis also notes that in immigration cases, the Department of Homeland Security acts as prosecutor and the Department of Justice acts as judge—both of which fall under the executive branch. Although he doesn't impugn the DoJ, he does favor a system that would put on the bench an independent arbiter from the judiciary branch to try these cases.

"One possible solution is to have immigration proceedings be conducted in federal court, even if it's under a federal magistrate," he says. "An independent judge is something to seriously consider looking at."

Whatever comes out of this week's discussion, Quintana doesn't want it to digress into complaining. He predicts a productive evening—one that isn't anchored down with negativity, finger-pointing and charged comments that can rile a room.

"We are there to talk, not shout," Quintana says. "We are there to discuss solutions, not vent frustrations. There's been enough venting, enough protests and enough shouting."