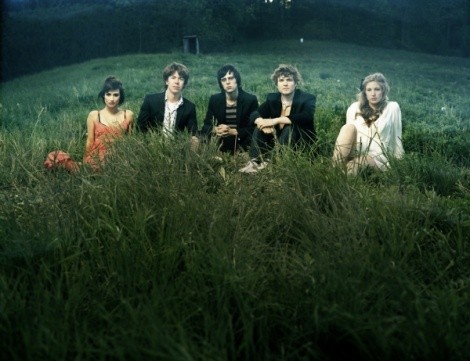 New York art-rockers Ra Ra Riot thrive on the dramatic, whether it’s the bold rat-a-tat bass lines that rumble through many of their songs or the massive, sweeping strings introducing classical elements to the quintet’s jaunty, dance-friendly tunes. Even the band’s own history is full of drama; original drummer John Pike died unexpectedly when the band was about to launch its first coast-to-coast U.S. tour and record their debut album, 2008’s The Rhumb Line.


After recovering from that shock to the system, the band toured extensively with new drummer Gabriel Duquette, and new set The Orchard is the band’s first with its current lineup. Still in place are bassist Mathieu Santos’ distinctive licks, and the swoops and swirls of violinist Rebecca Zeller and cellist Alexandra Lawn. Singer Wes Miles is more confident a vocalist than on the debut, providing just the right amount of urgency to songs like “Too Dramatic” and worldbeat-influenced first single, “Boy.” And the otherworldly coed harmonies and intricate rhythms delivered by Miles and his bandmates on “Massachusetts” are something few of Ra Ra Riot’s peers are capable of pulling off. The lyrics can get gloomy on occasion, but the beauty of the band’s arrangements makes any dark sentiments go down easy. The Orchard is certainly one of the stronger sophomore efforts in recent memory.

Ryan Bingham had already established himself as a rootsy critics’ favorite with his first two albums before his Oscar-winning collaboration with producer T-Bone Burnett on “The Weary Kind (Theme from Crazy Heart).” That certainly is not going to change now that their relationship has resulted in a winning full-length project on Bingham’s new Junky Star album.


With a sandpaper voice somewhere between Bob Dylan and Tom Waits, Bingham delivers a strong showing on songs ranging from sparse, low-key opener “The Poet” to the shambling rock of “Depression” to the twangy blues of “Direction of the Wind.” Thankfully, the “Hallelujah” here isn’t the umpteenth cover of Leonard Cohen’s classic, but instead a soulful slow shuffle. All the songs were written by Bingham and feature his longtime band the Dead Horses: drummer Matt Smith, bassist Elijah Ford and guitarist/mandolin player Corby Shaub. Burnett’s production is an ideal match for the band’s skills; he leaves plenty of space for each player to shine, and Bingham’s lyrics and grizzled-beyond-his-years voice are front and center, as they should be. (Ryan Bingham & the Dead Horses headline a show at Deer Valley on Monday, Sept. 6).