Multipurpose Bay: Horrific/Funny
The Bay (404 S. West Temple) can do it all, hosting the horrifying in one week—Danny Trejo from From Dusk Till Dawn–and the hilarious only a few days later. Rachel Feinstein of Last Comic Standing fame will do a standup show with an as-yet-unnamed local opener on Friday, Nov. 12. The show starts at 8 p.m., and tickets are $10 in advance, $20 day of show, via Smith’sTix outlets and ticketcake.com. The afterparty begins right after the show.


Stir Crazy: Firing Up Your Wok
The cold starts coming on strong this time of year and people begin nesting. If you’re already going stir crazy indoors but yearn for more, get un-crazy on Stir-Fridays at W Lounge (180 W. 400 South). Hot Noise and Flash & Flare stir it up Friday, Nov. 12, at 10 p.m.

Drinking Tips: Wings Keep You Grounded
Being too drunk at a bar is never fun, but one way to avoid it is by ingesting some good ol’ fashioned wings. Although it may surprise people to learn it serves food, A Bar Named Sue (3928 S. Highland Drive) will soothe you with cold $2 Coronas and heat you up with 50-cent hot wings on Mondays. Go ahead, drink some more while staying grounded with some wings. Nobody needs a DUI in this economy.

Area 51: Dress Up
Area 51 (451 S. 400 West) is well known as a great Halloween spot, but you can play dress up other times of the week at this venue. Klub Kaos, “a post-apocalyptic” experience, could do with some nice accoutrements during the regular Saturday-night feature—perhaps a gas mask or robot riding crop. And Sanctuary’s “dark-wave” and goth on Thursdays showcases people wearing extraordinary things every week. 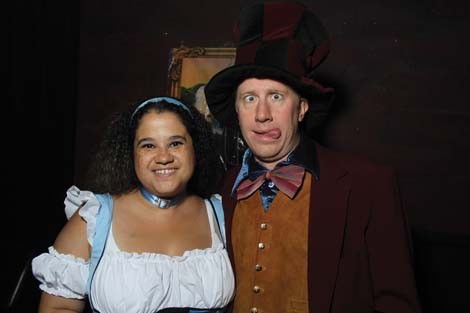