A DIY Provo venue brings out its rebel spirit in support of the LGBTQ community. 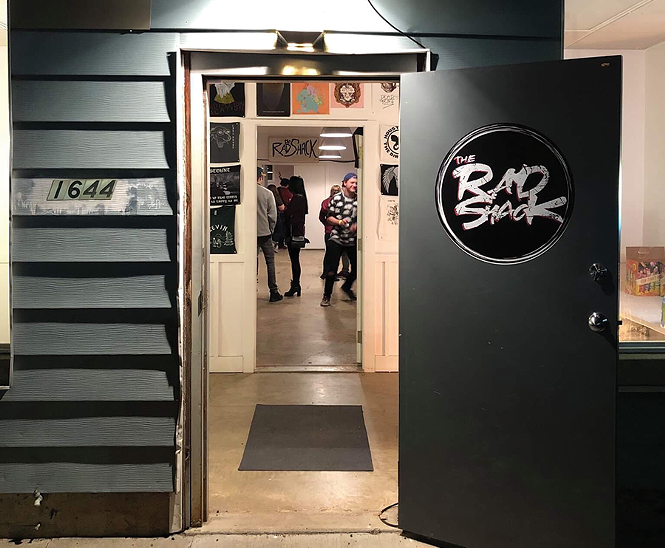 Pride is something of a frenzy-ish time, with excitement rising as soon as there's a whiff of it in the air. Provo is no exception. While SLC Pride and its big, bright, loud parade and festival get most of the attention, communities like Provo have their very own schedule of festivities.

One such event takes place a week before the official Pride weekend hits at Provo's own DIY venue The Rad Shack—opened by California transplant Albert Vargas and Provo musician Dalin Shepherd in the wake of Muse Music's closing in late 2016. The venue became something of a home for Caleb "Cubby" McBride, a Southern Idaho-turned-Provo musician and member of the pop-punk act All That Falls, and he's since started helping out at the venue by booking shows, including their Pride event, the Provo Pride Benefit Show, on Saturday, May 25.

McBride explains that his involvement in the community—and eventual putting on of shows now and then at The Rad Shack—came about by simply attending shows there. "The Rad Shack was the first venue in Provo that I ever played, with a band called Kambree that is on the bill for [the benefit show]," McBride recalls.

While still living in Southern Idaho, he and his band cut their teeth playing charity events—so many, he says, that they eventually learned how to stage their own. "The Rad Shack is the proper and only venue to do this event at," he says, "because not only is it one of the best venues in Provo, in my opinion, it is just a great DIY venue that can accommodate the bands, crowd and vibe of the whole event."

Spaces like The Rad Shack often best accommodate the needs of those who aren't served elsewhere. With McBride's experience putting on shows at the venue, it seems like the event is on stable ground, ready for the night of lively music and its listeners.

The benefit show features a diverse roster of local talent. Among them is Bly Wallentine (FKA Officer Jenny), a longstanding local musician and owner of the Provo music studio Studio Studio Dada, who presents pop-rock-folk that sounds at first like church music until electric guitars or lyrics about sex and queer identity move in elegantly. Wallantine performs alongside pop-punk acts Alpine Loop, Radiation Vacation and McBride's band All That Falls, who identify with pop-punk, though they maintain a distinctive '90s alt edge. Also from Provo is electro-pop act Kambree, and from nearby Springville comes Harbor Patrol. Salt Lake City is represented by melodic rockers Storm Harbor Point, and one touring act, If We Were Turtles, arrives from El Paso, Texas. Provo Pride representative Chloe Agyin serves as emcee, and will give insights into Provo Pride and all it does.

McBride says it's exciting to get the chance to help raise funds for Provo Pride, and to get more involved with the organization in general, all while seeing eight great bands playing for the cause. "I am super excited to play this event as a musician ... and as an advocate of the LGBTQ community, [I'm excited] to make new friends within the local Provo community."

For McBride, it isn't just the music that's central to the evening and its success, but what the audiences can get out of the evening. "I really hope that the attendees have a sense of peace, safety, acceptance, and community throughout the night," he says. "I want them to know that there are people who know and care about what they are going through whether it be the bands, people attending, or just the local concert goer."

He cites the coming out of a close friend and mentor as the catalyst that opened his eyes to the importance of accepting and caring for LGBTQ folk—be they friends, family or strangers—and creating safe spaces free of the emotional turmoil and stress those who are part of this group face all the time. "There is so much bigotry, hatred and grief toward the LGBTQ-plus community that if just for one night, set or song, someone who is going through a struggle or crisis can forget that and be who they are, for that moment, then [to me] the night is a success," he adds.

For those who just can't wait for Pride to start, the Provo Pride Benefit Show is there for you to kick off your celebrations early with a night of rad local bands, community and charity. Whether you're from Utah County, an intimate night at the DIY space, supporting the local LGBTQ community and their Pride organization, is a great way to open the season.