Lightyear's convoluted self-justification is the only thing interfering with its entertainment. 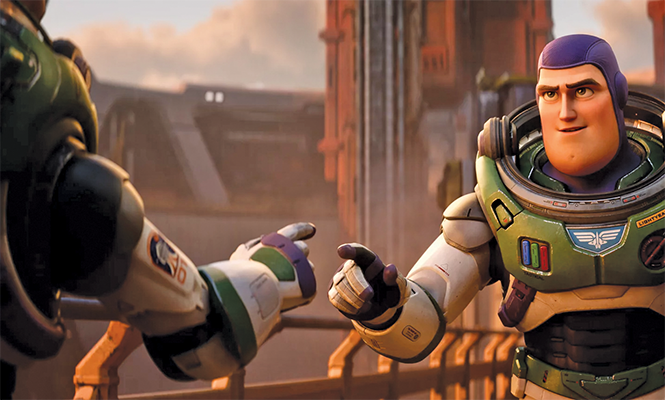 Ever since Disney and Pixar announced Lightyear, their attempts to explain the premise have been ... well, "overly-complicated" is one way of putting it. "Silly" is yet another. It wasn't going to be a continuation of the Toy Story franchise, clearly, and there was something about "the real person that the toy Buzz Lightyear was based on." All of it felt like the most circuitous route possible towards what was essentially "we want a brand extension of a recognizable character, just deal with it."

Efficient onscreen captions at the beginning of Lightyear help clarify things considerably: Andy from Toy Story got a toy Buzz Lightyear in 1995, the toy was from his favorite movie, and Lightyear is that movie. That would be kind of a nifty idea if the creative team's intentions were to make an homage to the kind of blockbuster that a pre-adolescent kid would have loved in the mid-'90s, all while getting the marketing boost of association with the beloved Toy Story movies. But that's not what Lightyear is. It's a generally fun movie, and it hits some of the emotional notes that feel authentically Pixar. It's just none of the things they keep trying to tell us that it is: a circa-1995 blockbuster, or a Buzz Lightyear movie.

The latter assertion might seem confusing, since there is indeed a Space Ranger named Buzz Lightyear (voiced by Chris Evans) at the center of the story. When his interstellar spacecraft detects life on a remote planet—in an opening that starts to feel weirdly reminiscent of Alien—Buzz and his partner Alisha Hawthorne (Uzo Aduba) investigate, but Buzz makes a costly error that results in the ship's large crew being stranded indefinitely. Buzz takes it upon himself to solve the problem, testing an experimental hyperspace fuel.

That process results in some time-traveling complications, with Buzz aging mere days while he ends up teaming up with Alisha's granddaughter, Izzy (Keke Palmer), when the evil emperor Zurg shows up (don't act surprised, Andy had that toy, too). It's a clever device for looking at the way people can get trapped by mistakes that they believe define them—and in Buzz's case, the ongoing problem of trying to take care of everything without reaching out for help. Director/co-writer Angus MacLane sweetens up the message's medicine with the amusing shenanigans of Buzz's makeshift team, which includes not just Izzy, but clumsy Mo (Taika Waititi), ex-convict Darby (Dale Soules) and Buzz's robot cat companion Sox (a scene-stealing Peter Sohn, who forces you to wonder why Andy didn't have that toy, too).

The ensuing adventure is lively, often quite funny and thoughtful about its subject matter—all of which makes it absolutely nothing like the kind of big, dumb spectacle to which it's theoretically indebted. The first act in particular is weirdly in medias res, explaining nothing about the nature of the Space Ranger corps, their role on what otherwise appears to be a scientific mission, or Buzz Lightyear in particular as a character. There's at least one obvious reason for bypassing such exposition—Buzz Lightyear has been part of the pop-culture landscape for nearly 30 years—but it does make it difficult to carve out an identity for this character distinct from Tim Allen's hyper-heroic Buzz.

And whether anyone on the creative side likes it or not, that tension is built into the DNA of a movie called Lightyear. Chris Evans' voice performance is perfectly satisfactory, but it exists in the shadow of one of the best animated voice performances ever. This guy is Buzz Lightyear, but he's not our Buzz Lightyear, and it's clear that this identical story could have worked quite well if we were starting from scratch with a protagonist whose name we'd never heard before. At least that's one way this feels a little bit like a 1990s blockbuster: It's kind of like when studios would look at a script and think, "Hey, this could be the next Die Hard sequel, let's change the hero's name to John McClane and rake in an extra $100 million!"

Is all of this overthinking a family-friendly summer movie, and underselling its charms? Maybe, but Disney and Pixar asked for it by building a back-story that didn't need to exist. Lightyear is a story about letting go of the past and getting on with the life that's in front of you. As satisfying as it often is, it would have been even better if it had listened to its own advice.