NYC rap group Ratking doesn't dwell on the city's past 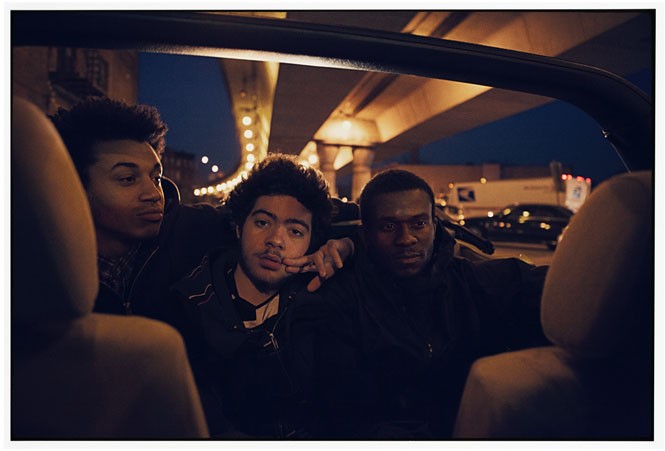 On Black Star's 1998 single "Respiration," New York City native Mos Def says the line, "The shiny apple is bruised but sweet and if you choose to eat/ you could lose your teeth/ many crews retreat." In other words, according to Mos, beneath the grandeur of the proverbial Big Apple lies its seedy, rotten underbelly.

Sixteen years later, this sentiment remains true. Gotham's dark side still produces the most notorious rappers. It's this very substratum that spawned names like Non Phixion, Native Tongues and Definitive Jux, all of whom took creative liberties and pushed rap into the aberrant places that are now considered status quo. Currently, this is what we're witnessing with Ratking, one of the most experimental and aesthetically raw rap groups residing in the Five Boroughs.

Their name is a reference to a few things: the rodent sensei Splinter from Teenage Mutant Ninja Turtles for one, but mainly the monstrosity produced when a group of rats live in close, dirty quarters and knot their tails together.

It's a suitable name, really. Ratking's debut album, So It Goes, released in April on XL Recordings, is a dark and tangled melting pot of subculture and sound. The album is as New York as a Yankees hat. Rappers Wiki and Hak trade verses about mortality, gentrification and the humor of growing up in a harsh, overcrowded environment. And beneath beatmaker Sporting Life's heavily layered production, there are hints of grime, punk and tribal, even samples of subway-door dings and police stop & frisks. Overall, the album is dark and authentic; you can almost smell the black leather of a Manhattan cab.

These creative decisions reinforce the album's theme and title, which is a not-so-subtle nod to Kurt Vonnegut's Slaughterhouse Five. "Things ends and shit dies," Wiki says. "Everything just goes on. It's all a cycle. I feel like we're relating that to our music and the city we live in."

Ratking doesn't seem to dwell on the past. For New Yorker rappers, the importance of sounding "New York" holds about as much weight as where they buy their bagels. The city has a long tradition of mimicking its own regional sound (cue up Pro Era for more on this), and there's certainly nothing wrong with that. But for Wiki, Hak and Sporting Life, the emphasis is all about the present.

Though their style certainly contains shades of NYC predecessors like Beastie Boys, Wu-Tang and Dipset, these comparisons are about as ridiculous as Cam'ron's pink fur coat. Sure, those elements are there, but Ratking isn't carrying a torch for the artists of a bygone era. The opening track, titled "*" (pronounced "asterisk"), hits the jump with a pulsing MIDI that thumps like an ominous heartbeat, while a sample of a muddled conversation can be heard in the background: "Rappers right now, it's a whole 'nother generation, you really can't compare no more. If your life experiences are different, then that's gonna come out differently ... So it goes."

Starting the album on this particular note steers the focus away from the New York legends that came before the trio and places the spotlight squarely on Wiki and Hak, musing about coming of age and the rise of Ratking: "We advanced/ got our advance/ copped a couple amps/ now we enhanced," spits Wiki in his high-pitched voice.

There's a coarse, frenetic energy within these bars. However, So It Goes doesn't come across as too avant-garde or radical. Through all the noise and the occasional "daaayyyyumms," there's still an element of cohesiveness. Much of this organized chaos stems from Ratking teaming up with Young Guru, an audio engineer whose name is attached to projects like Jay-Z's The Blueprint, Ghostface's Fishscale and Little Brother's The Minstrel Show.

"It was a little intimidating working with Young Guru," Wiki says, "because well, he's Young Guru."

Ultimately, Guru stripped away the fat and gave So It Goes the feel of a tough and progressive hip-hop album, something not trying to be arty just for art's sake.

As Wiki says on the track "Protein," "This ain't '90s revival, it's earlier/ it's tribal revival/ whose urgence was liable/ to merk 'em and leave 'em in piles/ Before I get to earn that chieftain as my title." If Mos Def was indeed correct, and the Big Apple will eventually make you "lose your teeth," then Ratking will likely wear the brass knuckles.