Fun music and flavorful maki are specialties at Sushi Groove 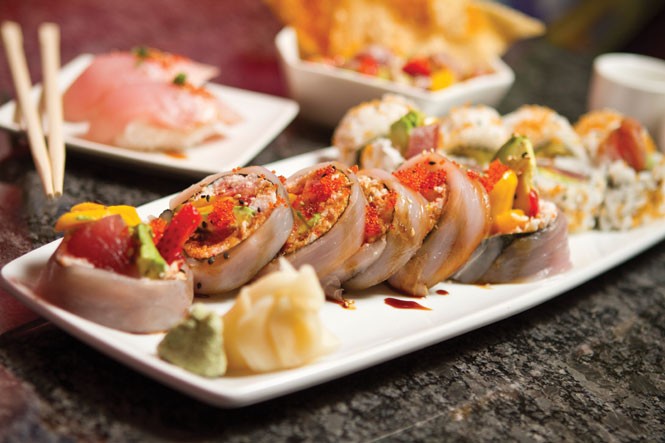 If you've seen the film Jiro Dreams of Sushi, or even if you've eaten in some of the higher-end local sushi emporiums around town, you probably know that certain sushi is all about reverence. When you put yourself in the hands of a sushi master—preferably eating omakase style—dining can morph into a quasi-religious experience. I've had such experiences, ones where the sushi making and eating culminate in a dining synergy that's almost spiritual.

If, on the other hand, you sometimes think, like me, that sushi is just food—like any other food, and what's the big fuss—then you're really going to love Sushi Groove. The name says all you need to know: Eating at a place called Sushi Groove isn't likely to be a holy or transcendent, life-altering dining experience. But it sure is fun.

Sushi Groove just celebrated its fourth anniversary, and so I thought it was about time I got my butt over there. It wasn't until I joined a buddy and his two kids for lunch there that I began to put the pieces together. I hadn't realized that Sushi Groove—which I'd mistakenly thought was a sad, all-you-can-eat sushi joint—was, in fact, the brainchild of Dave Ayala.

I'd first encountered Ayala, an outgoing, fast-talking Pittsburgh transplant, at the sushi bar in Snowbird's Aerie Restaurant, and then as head sushi chef at the now-defunct Go Sushi. I remember being struck at his enthusiasm around sushi, and also his lack of pretension. He wants his customers to enjoy his sushi, not necessarily worship it.

The atmosphere at Sushi Groove—with its graffiti-style wall murals, live DJs, and funky vibe—is a giveaway that this is not one of the houses of the holy. "I've had people come in and say my restaurant isn't romantic enough," Ayala says. "The name Sushi Groove should be a hint that this isn't a fine dining restaurant!"

And yet, the dining at Sushi Groove really is fine. The food is top-notch, the service is terrific and the ambiance is, well ... groovy. When was the last time you heard the Allman Brothers' "Ain't Wastin' Time No More" wafting from the sound system at your sushi bar?

Whether you're dining alone or with a crowd, the staff at Sushi Groove—from servers to sushi chefs—really goes out of their way to make you feel welcome. I honestly don't know that I've met a friendlier restaurant crew. During a recent visit, as I was having some acid-reflux issues that had nothing to do with sushi but everything to do with a fatty breakfast, Ayala and his crew rolled with the punches. I felt awful—both physically ill and embarrassed—but Ayala's sushi resuscitated me. Maybe sushi does have magic powers.

The motto at Sushi Groove is "fresh cuts daily," and Tuesday is a good day to enjoy those fresh cuts at bargain prices. That's when two-piece nigiri—normally priced at $3.95 to $4.95 per order—is only $2.50. And that's when the fish is freshest. Sitting at the sushi bar with my wife on a Tuesday, I was riveted, watching Ayala and his sushi chefs breaking down huge slabs of fresh fish into portions suitable for sushi, nigiri and sashimi: ono, maguro, kajiki, Tasmanian ocean trout, sake (salmon) and much more.

So, I recommend kicking off a Sushi Groove visit with orders of nigiri, perhaps beginning with mild hamachi (yellowtail) or, if it's available, delicious, mild-flavored ono (also called wahoo). The generous slices of nigiri on high-quality sushi rice usually require nothing more than a hint of citrus for seasoning, and are usually best just eaten naked; save the soy sauce/wasabi mixture for smothering inferior store-bought sushi.

Following nigiri, I like to move onto brightly flavored poke salads or ceviche. I'm particularly fond of the Groovy ceviche ($6.95), which is a melange of diced albacore, blue marlin and tuna tossed with mango, strawberry, avocado and masago (capelin fish roe), all lightly "cooked" in citrus juice and served with fried, crispy wontons—Japan's answer to the tortilla chip.

Probably the biggest draw, however, are the Groovy rolls. Be forewarned: they tend toward ginormous portions and are built with sharing in mind. A basic but delectable maki roll from the Groovy menu is the Maui Wowi ($7.50)—lightly seared tuna with mango and avocado, wrapped with rice and tempura "crunchies" (the batter bits leftover from tempura frying).

There are recognizable rolls like the Spider ($8.95), Caterpillar ($11.50) and Rainbow ($10.95), but my favorite is a riceless roll aptly named the Lip Smacker ($16.50). It's a bursting-with-flavor roll made with tuna, crab, avocado and strawberry, all wrapped in luscious blue marlin slices and drizzled with eel sauce and tobiko—a party on the palate.

The cooked fare at Sushi Groove is also outstanding. Kids who might eschew sushi will like the rice bowls (seafood, beef, chicken, tofu), and a friend of mine says he always asks Ayala to make his favorite hand roll for "dessert." It's a Cajun-spiced blackened scallop roll, and it's out of this world.

Romantic? Religious? Maybe not. But for the grooviest sushi and atmosphere in town, try Sushi Groove.