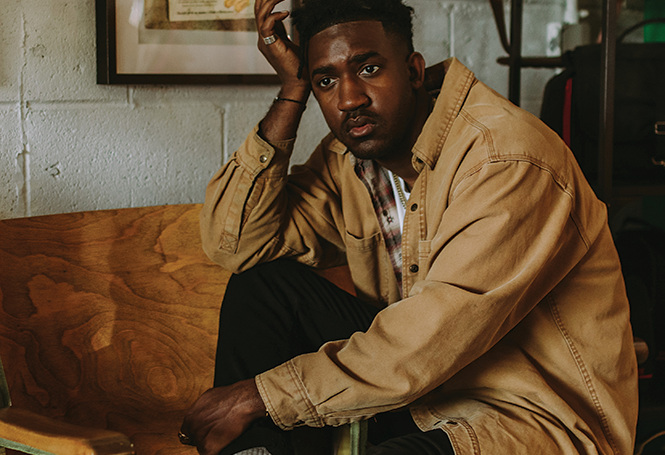 For many artists, the pandemic—as well as heightened focus on discourses about race and inequality—has stalled creative efforts. It's not as easy to find artists who are pushing forward and continuing to make themselves both seen and heard.

But that's not the case for SLC artist Jay Warren, a local R&B crooner who's been slowly releasing tracks over the last few years. He is now managing to wrap up his debut album Give Love, on top of keeping his hands busy in a number of other projects, and pursuing his goal of being the first Utah artist to reach number one on the iTunes R&B charts. "I have a philosophy that, at the end of the day, if you have a personal brand, it's really all about creating the most value for the people you engage with, who engage with you," Warren says.

He's been keeping that engagement up in spades. Besides releasing the infectious, pop-driven single "Take it Higher" in June, and spreading the word about his #1 dreams (which he's handily on the way to, with pre-orders piling up on iTunes), he's performed on the quarantine-born virtual concert series Social Antidote, and started two non-music-related projects, one alongside his wife Annie Warren.

"Obviously the music is my number one, that's my passion and that will keep happening forever, but my wife really wanted to start a podcast, so I was like, yeah let's do it," he says. "So during corona season, when things slowed down, we finally had time to get that going."

The series has turned into a unique product of its time, blending topics like relationship advice or advice for new parents with commentary and guest spots that address the realities of interracial marriage, staying positive during the pandemic and how to get involved in conversations about—and actions against—racism. Similarly, Warren has also started a video series called Questionz, where he sits down with other artists to discuss all things music, life, politics and more with fellow locals like James Curran, Jenn Blosil and Bri Ray. On top of all this, work for Give Love chugs on towards completion and its September release date, when fans will be treated to an ambitiously diverse palette of sound, inspired by the pop-to-ballad to R&B-and-everything in between meanderings of Michael Jackson's Thriller.

He's also keeping in mind recent events around Black Lives Matter on social media and blog posts, and working to keep them distinct from his career. "I've been really diligent to try to separate the two, so that I'm not distracting from the movement with my music," he says, "because at the end of the day, music is my business; that's how I create income, that's how I put food on the table."

Certainly as a Black artist, it's his right to make that call about his own life's work, and he makes it clear that since Black Lives Matter is at the forefront of our country's shared consciousness right now, he doesn't want to risk conflating it with his music, lest he divert from the important social work being done. The move has made space for him to be frank on socials and his blog, where he addresses common questions people have about BLM, such as his observation that the reason this feels new for many white people is because of a longtime nationwide focus on white history over that of people of color.

"I'm trying my best and I'm definitely not sleeping as much as I probably should be," Warren says. "I feel like right now, we're at such an important time in our generation's history, that putting in the work now is what's needed and what's necessary. Again, it's not about me, it's about the movement, and it's about creating the change that all of us wanna see." That work, for him, includes at least one musical footnote, by way of a late August collaboration with the Utah Black Chamber of Commerce, where besides enjoying music by Warren and others, attendees can register to vote and learn about Black and brown voter engagement.

"Somehow we've managed to fit the entire 1960s in the first six months of 2020," Warren notes. "It's just absolutely crazy. Within the 1960s, you have a decade's worth of amazing music that people love and listen to today."

And while he's striving to keep implicit conversations about race away from the business that is his music, it seems he does hope his music can be part of the feeling in our own 2020 moment. "For me, I hope that the album provides an opportunity for people to feel, just to feel," Warren says of Give Love. "I don't want to assign how they're going to feel or what they should feel, and I don't even necessarily hope that they feel the same things that I feel. I just hope that it gives people the opportunity to feel things, because we're already in a place where emotions are high. I think music oftentimes provides people this opportunity to escape from the things that are troubling them. Hopefully this album can do that in more ways than one."