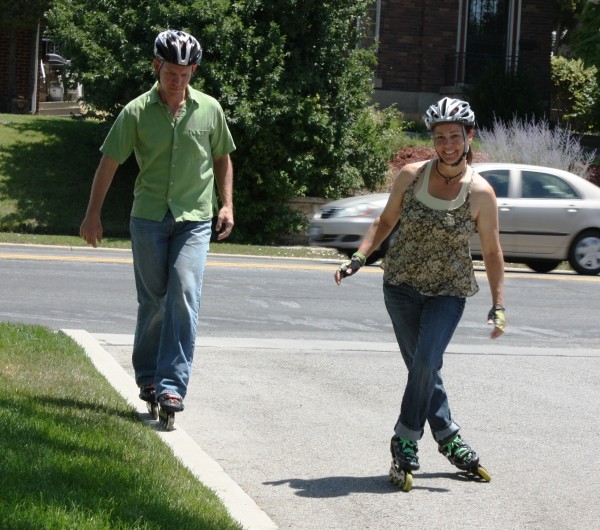 If you’ve been spending time at Liberty Park or on the Jordan/Provo River Parkway, you already know the news. After a big decline that began in the early 2000s, skating is back—big time. Whether on regular inlines, fast five-wheeled speed skates or even roller skates, a growing number of people are using small wheels for fun, exercise and transportation.


It’s easy to see why. Skating on pavement is one of the best exercises you can do. First, it’s a real fat burner. The more you weigh, the more calories it burns. Those weighing 150 pounds will burn 816 calories an hour. At 130 pounds, skaters burn a little over 700 calories an hour.


Skating also works every muscle in the body. Legs, butt and core get the biggest workout, while arms, neck and back are also exercised. Unlike mountain biking or cycling, where the saddle and handlebars help support the rider’s weight, skaters must support their full body weight with each stroke. It’s also more of a workout than ice-skating because there’s so much more friction from the pavement.


Kimberly Simons-Kraan and her husband, Eric Kraan, are excited by the trend. The couple started their SkateNow shop (2682 S. Highland Drive, 801-944-5516, SkateNow.net) in 2001, selling a complete variety of skates and protective gear for both pavement and ice, including a large variety of often hard-to-find wheels. “We’re seeing a lot of people coming in to buy inlines. They help you get in shape for skiing; you use the same muscles,” Kimberly says.


The shop is also one of the few places in the Wasatch area that offers lessons for both newbies and those who want to improve their level of skating. Kimberly says, “We are Utah’s only skate school with [International Inline Skating Association]certified inline instructors.”


Entry-level inline skates cost around $100, while a fitness or racing pair can cost more than $200. If you’re new to the sport, it may be wise to start with inexpensive used skates that can be found online or in used-equipment shops like Play It Again Sports, just to test whether it’s an activity that will hold your interest.


The most common worry for less experienced skaters is stopping. Kimberly advises learning the “T” stop, where one skate is turned sideways behind the other. She says, “A T-stop is faster when you have to stop on a dime. Generally, skaters don’t stop as much as they slow down to avoid something or someone, and a T-stop is perfect for that. For a T-stop, you want to balance your weight on the forward skate, hips and shoulders pointing forward, and the back skate turned sideways, in more of a ‘V’ rather than a ‘T.’ Gently [apply] pressure evenly and lightly across all four back wheels. Maintain a light pressure. If you put too much pressure on those back wheels, you’ll go into a spin. Practice in an open, flat area, like a noncrowded parking lot, church or school.”


Street curbs aren’t really as intimidating as they appear; skaters should just slow down to a comfortable speed and step up onto the curb with one skate. The most efficient position for a skater is to keep hands forward for balance, while bending the knees and ankles. Keeping those joints flexed lowers your center of gravity to provide more balance. “Don’t be a stick man,” Kimberly says of the stiff and straight posture used by some skaters. “Your leg joints should be like a kind of suspension. You should adjust for balance as you go. If you really want more of a workout, sit deeper into the skating position.”


SkateNow holds two free group skates open to anyone who wants to participate. The Legacy Trail skate is at 10 a.m. to noon most Saturday mornings, on the smooth trail beside the highway. The group meets at 1130 W. Center Street in North Salt Lake, off the Redwood Road exit (No. 27) on Interstate 215. A freestyle/slalom skate is held at Liberty Park on Tuesdays at 6:30 p.m., meeting in front of Tracy Aviary (589 E. 1300 South).Â