After the big artifact raid, residents ask how to put Blanding back together again. 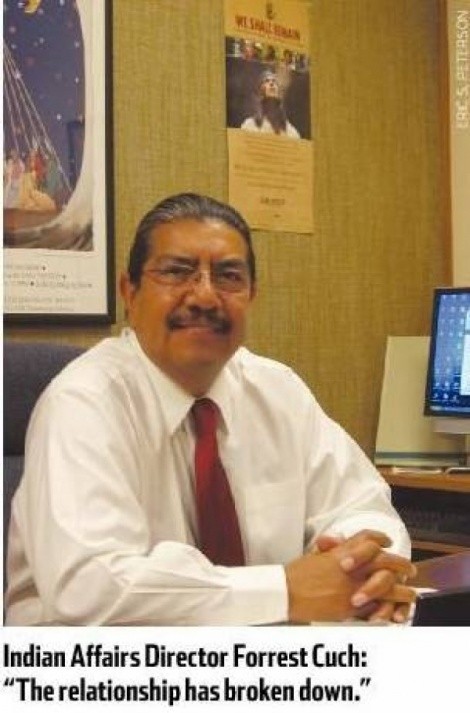 “It’s like a war between the cowboys and Indians, settlers and the indigenous peoples,” says Utah State Office of Indian Affairs Director Forrest Cuch, with some resignation. Cuch is reluctant to resort ot using an old cliché in describing tensions between the state’s native and nonnative residents, but it’s the one that sadly seems to fit since the June 10 federal sting that brought charges of American Indian artifact theft and trafficking against 24 defendants, 17 of whom lived in the southern Utah community of Blanding, just north of the Navajo Nation. The crackdown has stirred racial tensions in the community, with its large Navajo population. And while prosecutions against the alleged looters are moving forward, for community leaders in the area, one thing can be agreed on: Unity is needed in the community.

“The relationship has broken down,” Cuch says. “The response time for arrest and exchange is so poor that it’s leading to some forms of lawlessness.”

San Juan County Sheriff Mike Lacy, the area’s law enforcement chief who has publicly decried the FBI’s handling of the raid could not be reached for comment for this story.

Robert Begay, director of the Navajo Nation’s Department of Archaeology, acknowledges there are some obvious barriers to law enforcement protecting sacred sites.

“On the Navajo Nation, we just don’t have the resources or the money to actively enforce a lot of these laws,” Begay says. “We do what we can, but it’s not consistent.”

Beyond that, Begay cites estimates that there may be as many as 1 million small sacred sites spread across the Navajo Nation. The vulnerability of the sites themselves may also be the product of a cultural divide, as the prevailing attitude for many Navajo is that these sites aren’t meant for museums but are simply to be left alone.

“These [artifacts] belong to past peoples, the ancestors of the Navajo,” Begay says. “We have no right to disturb them.” For many American Indians, there’s a thin line between gravedigging done for profit and excavating in the name of science.

“It’s a cultural clash,” Cuch says. “One culture believes in leaving those things alone and honoring them by leaving them intact. The other culture believes in examining [artifacts] for two purposes: for educational and scientific knowledge or financial gain. The financial gain is purely dark and ugly. The educational and scientific [purposes] … the problem there is where do you stop digging?”

For Cuch, a long-term solution goes beyond law enforcement and is something Blanding Mayor Tony Turk agrees with. Turk recalls a similar raid that took place in Blanding in 1986. “If every 20 years, you come in and do a military strike, you’re not solving the problem—you’re just making people mad,” Turk says.

Turk sees museums and the artifacts themselves as being integral to bringing together a community of respect. He’s considering issuing a call for amnesty to people who have taken artifacts from sites to return them to Blanding for display at the city’s Edge of the Cedar’s Museum, which already houses many Anasazi artifacts. He would also like to see artifacts from the region returned from other museums and private collections to Blanding’s museum and then to use the exhibit as the centerpiece for an educational curriculum on American Indian culture. Since the items have already been removed, Turk feels the damage is already done.

“We’re talking about sacred items that already have been disturbed,” Turk says. “I think it would be tragic to destroy them.”

With 12 years educational experience as the federal program director for schools in San Juan County, Turk hopes to establish a partnership with the state Board of Education on the curriculum. He envisions using the artifact raid as a stepping-off place to build unity and minimize the cowboys vs. Indians cliché currently fomenting in the community.