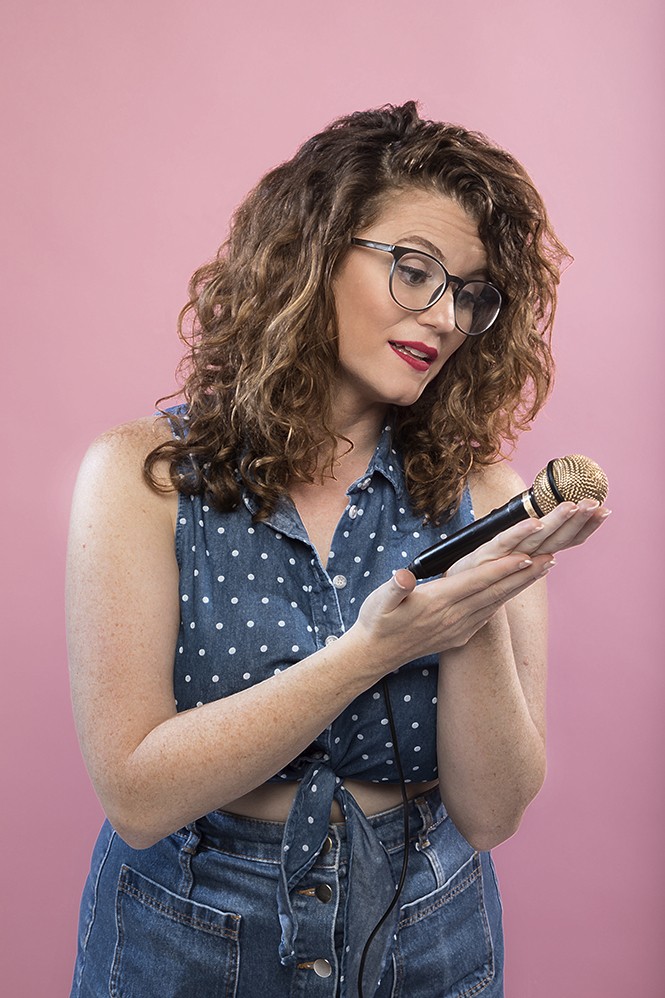 For a stand-up comedian, recording your first comedy album can be a milestone step in your career. For Barbara Gray, it's also a chance to move on from the jokes that launched her career.

"Part of the reason I'm doing this album, I think, is that I'm a different person from when I wrote a lot of this material," Gray says. "I'm still proud of them—10 years' worth of work is something to be proud of—but I'd like to talk about how I really feel right now."

Raised in Salt Lake City and a former University of Utah student, Gray is returning home to record that debut comedy album at The Urban Lounge. And it wasn't a straight line that Gray took toward being a professional comedian. While she describes herself as "always a performer," including summer theater camps at the U, she started her university studies in theater. When she realized theater wasn't quite for her, she switched to film studies, as she describes it, "to get some technical capabilities." That led to moving to Los Angeles in 2008 to work in the film industry, but even then she still wasn't certain where to focus her energies. "I wanted to do everything," she says, "which isn't really possible."

Eventually, her childhood love of comedy led her to being a frequent attendee at Southern California comedy clubs, where she ultimately started performing at open mics. "The good thing about stand-up," she says, "is if you go to enough open mics, you'll see enough people where you think, 'Well, I'm funnier than you are.' As soon as I got on stage, it was like the clouds opened up."

Gray's material tends toward R-rated explorations of her personal life, and it might be easy to assume that a Utah-raised kid turns to raunchy comedy as a way of acting out. But Gray says that's not the case for her, though she was raised Catholic in primarily Mormon Salt Lake City. "I think some comics are fighting against the way they were raised," she says. "I went to school with mostly Mormon kids, and they were very nice and kind to me. I think I was able to be myself a little bit more, because they don't bully you. I was a weird kid, crazy and loud all the time, but I didn't get any flak for it. I think that allowed me to be my own person."

It's still a challenge to be a female comedian, whether it's because of the overwhelming male-ness of the profession, or because people might be judgmental toward a female comedian who tells dirty jokes. "It's something that's just there, inherent, and it sucks," Gray says. "It's one of those things where, this is what I do, this is what I love, so I'm just going to be really good at it. Nobody's going to make room for you, especially as a woman."

She's certainly able to explore her voice as a funny woman on the comedy podcast Lady to Lady, which she has co-hosted for six years with fellow comedians Brandie Posey and Tess Barker (who will be opening for her album-recording show, along with local comedian Natasha Mower). The podcast provides a very different comedic dynamic, as the three friends chat about relationship issues, and adventures like a trip to a Magic Mike Live show in Las Vegas. "The improv, the banter, is very fun, because you're there with your friends, but you don't have the audience to feed off of," she says. "The best thing about live performance is the instant feedback, that addictive quality of knowing something is working in the moment. On the podcast, we're pros, we can make anything funny. Like in standup, you play a heightened version of yourself ... but we try to be genuine, too."

As she prepares for the live show where she will record her comedy album, Gray admits to being somewhat nervous. While she'll play a warmup show on May 24 at the Green Pig, the entire album will be recorded during one performance, which differs from the way many comedy albums are recorded over multiple nights to combine the best audience reactions. But though she wasn't sure she could sell out more than one show in Salt Lake City to make that kind of option possible, it was more important to her to record the show in front of her friends and family. "My friends I met in middle school and high school, whenever I go back home, I'm the most comfortable with them," she says. "We're the stupidest with each other. I want to be comfortable, and really go crazy and be wacky. I wanted all the people I love here, and have all the energy."

"My parents might be there for a minute," she adds with a laugh. "I might do five minutes of parent-friendly material for them."