An inside look at who's trying to help Salt Lake City residents stay up-to-date on the recycling world's changes.

The vehicles start their routes at 7 a.m.—but the team stays ahead, starting at 6:30 a.m.

They search out contaminated recycling and yard waste bins. Sure, it might not sound like a glamorous job, but the goal is twofold: keep solid waste out of the landfill's recycling and green waste facilities, and educate residents about proper recycling techniques.

The team tries to check every blue and brown bin on that day's route. City Weekly recently tagged along with two team members to better understand efforts to educate residents on the seemingly ever-changing recycling rules.

Since mid-2018 when Salt Lake City announced it couldn't accept plastic film at its facility anymore, residents wondered why. And as recently as Nov. 1, cities including Draper, Midvale, Murray, Riverton, Sandy, South Jordan and West Jordan announced they weren't going to take loose paper. Salt Lake City, as well as 13 other nearby municipalities, still do, however—adding to the confusion. Some of the reasons for the ban come down to countries like China no longer accepting that kind of waste. Other reasons hinge on whether machinery at local landfills can bundle and sort items such as paper and plastic film.

"For some reason, some people think diapers can be recycled," Bailey says, chuckling when asked about some of the grosser things they encounter.

If there's not too much material, they throw on gloves and move it to the trash bin. Then they'll staple a flyer to the top describing what they found. If it's too contaminated, they'll staple a longer flyer with the word, "Oops," to the lid and the bin itself, letting the truck drivers know not to empty it. The resident will then have to clean the bin before it's picked up at a later date.

Most of the contaminants they find, though, involve those pesky plastic wrappers—trash bags, plastic bags, storage bags, bagged food items—you name it.

Recycling markets are in flux, and programs like the city's outreach do their damndest to keep up. It can be difficult, though, says Jenn Farrell, education and outreach manager.

"Behavior change is tough—whether you're talking about the way you sleep or eat, even—the way people were bagging materials was tough to change," Farrell says. "That was the first thing we were able to see, was people bagging recyclables." Instead, the ought to be loosely placed in the bins, she explains.

The team of six has a lot of ground to cover. Salt Lake City serves about 42,000 homes, according to Farrell.

"I can see as a resident how it's very confusing," Bailey says as she pulls up to another bin. "There's so many different plastic films out there."

Even though the city saw residents cut down on bagging their recycling, the education team still finds other types of bags. Farrell says part of their education plan has been to get residents to view all types of plastic film as the same.

"It will be a really clean can, but with lots of little bags," Farrell describes, emphasizing frozen food wrappers as one problem item. "Or seasonal things—we'll get all other bags like mulch bags or salt bags. We've also been battling things that have the recycle label on them or they say, 'Recycle Me' but they're not really recyclable."

Plastic bags, she says, ought to be placed in regular trash bins or dropped off at grocery stores that will recycle the bags. 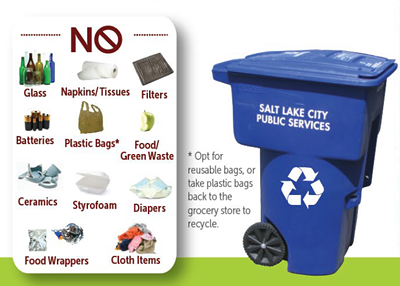 If you follow @slcgreen on Instagram, you might notice some stories about prohibited items that show up in bins. Recently, Bailey's noticed people trying to recycle all the items in a meal kit. "Everything will have the recycle sign on it," she says, "but just because it might be recyclable somewhere else in the country, doesn't mean they can recycle it here." Seeing the meal kit problem getting worse, Bailey posted pictures of what residents should do if they want to dispose of their meal kit packaging, such as throwing away the insulation, draining the ice packs and throwing out the plastic film before placing the cardboard in the blue bin.

While driving through more of Glendale, Ulrich shakes one of the recycling bins and hears what sounds like glass. She gets out and finds a few loose beer bottles and moves them over to the trash bin. By now, the two know the routes well and can identify problem homes. If it's a bin they've previously tagged, but it's in good shape, they'll staple a thumbs-up flyer on it. However, if the bin isn't good to go, they'll tag it and return in the afternoon to hopefully talk to the resident and identify the problem.

"Since we started flyering, there's been a lot less things contained in a bag," Bailey notes. "Overall, it's definitely improved."

Sometimes, Bailey says, it could be a neighbor putting wrong material in the bin. Or, as is the case in some neighborhoods, there can be a language barrier so they'll leave a flyer in Spanish. The team doesn't want to keep kicking the proverbial can down the road, so they try to come back and address the problems in person. For example, Ulrich came across a resident who spoke no English and kept putting the wrong material in the blue bin. When she met with him, she sorted through the bin and demonstrated which items go where. Since then, they haven't had many problems at that home.

The two tag an average of 20 to 40 bins a day. This particular day, they tagged 10 by 9 a.m. They planned to tag until noon and return for face-to-face meetings later in the day.

But for all the changes in the recycling world, Farrell says things are looking up locally. Since the changes in international markets, local landfills have had to play catch-up on their infrastructure. Come 2022, the city will install a paper mill able to sort through and bundle more kinds of paper and cardboard. It will be the first of its kind in the state. And, she adds, people still want to reduce their waste and recycle when they can.

"There's a lot of positive things going on in the world of recycling," Farrell concludes. "I want for people to not lose hope or faith when they read one headline ... the reasons that we recycle—to conserve resources and cut down on pollution—those reasons persist and are more important than ever."