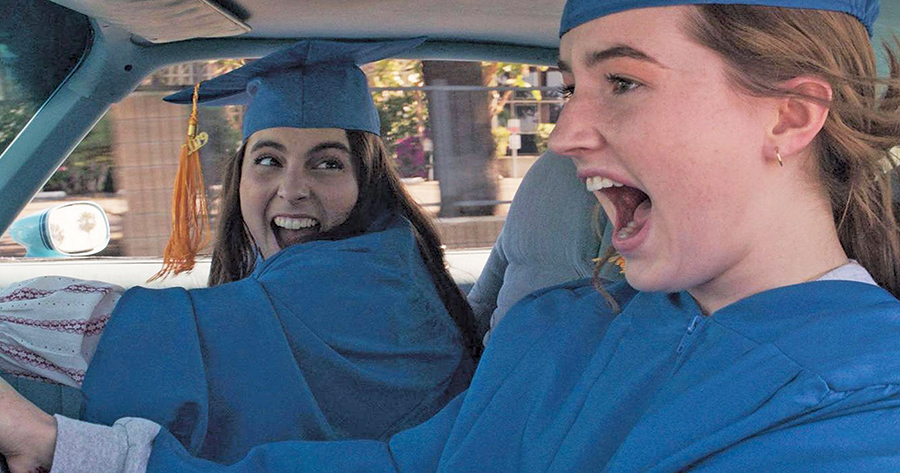 At a moment when we often seem to be going in reverse as a culture, it's a pleasure to realize one of the places where we're actually making some progress: Crude, adult comedies focused on women aren't so rare that we have to treat each one as groundbreaking transgressive entertainment. And we can actually talk about what makes the good ones, you know, good.

Like a lot of the classic crude comedies, this one is a teen coming-of-age story, but from a slightly different angle. Molly (Beanie Feldstein) and Amy (Kaitlyn Dever) are best friends and the two top graduating seniors at Southern California's Crockett High School—headed off to Yale and Columbia, respectively, after spending four years focused on nothing but building their academic résumés. But when Molly discovers on the last day of school that several of her less nose-in-the-books classmates are also heading to A-list universities, she experiences a surge of social hermit's remorse. Thus begins an all-night odyssey on the eve of graduation as Molly and Amy set out to find the school's big graduation party, and get their last chance to experience high school craziness.

Craziness they do indeed find, in mass quantities. The echoes of Superbad—starring Feldstein's brother, Jonah Hill—are unmistakable, full of episodic misadventures as our protagonists throw their nerdy selves into an unfamiliar and at times slightly dangerous world. Yet Booksmart carves out its own territory, largely by making use of a setting where openly gay teens—including Amy—are still figuring out what their sexual orientation means in real-world terms. Both Feldstein and Dever are terrific, finding distinctive shades in what could have been familiar high-school "brain" types, and embodying a power dynamic between the two besties that echoes their No. 1 and No. 2 class rankings.

What really kicks Booksmart into another gear, though, is that Wilde actually directs it rather than just serving up the f-bombs and masturbation gags in the script (credited to four women writers). The most wildly imaginative sequence has Molly and Amy tripping on a designer drug surreptitiously served up to them by a quirky classmate (a delightfully weird Billie Lourd), and hallucinating themselves turned into dolls with Barbie-like proportions. There's a goofy yet marvelously lit scene as Molly imagines dancing with the boy she adores from afar, and a lovely moment as Amy swims underwater, believing she's about to hook up with the girl she adores from afar. Perhaps best of all, a key scene involving an argument gradually drops out the sound, allowing for a focus on the raw emotions in the characters' faces that mean more than whatever specific words they're speaking.

Booksmart ultimately circles around to being about moments of transition and independence, and while it hardly flops at the more serious material, it's usually most effective when it's leaning into its great cast—including Jessica Williams, Lisa Kudrow and SNL alums like Mike O'Brien, Will Forte and Wilde's real-life partner Jason Sudeikis—and the comedic situations. That's largely thanks to a directing hand that's as deft with guiding actors to a killer line reading as it is crafting something with real visual style. It's wonderful to reach a point where we expect more than the shock value of women saying "fuck," and can celebrate women making a comedy that's fucking terrific.