Blockers serves up its gross-out gags with a side order of sentiment. 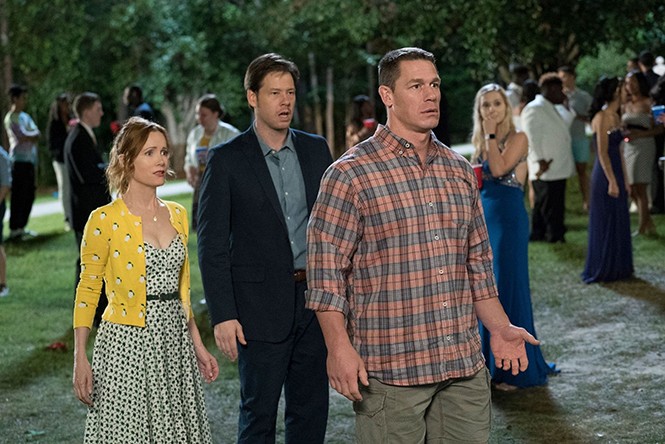 Whether or not American Pie is entirely to blame, I can't say. But it's the earliest instance I can recall of a phenomenon that rubs me the wrong way to this day: Crude, in-your-face comedies that feel obliged to neutralize all the bracing acidity with a heaping dose of sweetness.

Perhaps it speaks more to some pathological need to compartmentalize genres, like making sure all the different foods on my plate never touch. I also fondly remember a time when a Mel Brooks comedy or Animal House could hit theatrical screens with an anarchic sense of what could be used as a punch line, and no accompanying need to teach us Very Important Lessons. For 20 years, some of the most successful R-rated comedies—from Wedding Crashers to The Hangover to Bridesmaids—have made sure to let us know between did-they-really-just-do-that gags that they also care about, you know, people and emotions and stuff.

Blockers begins with exactly the kind of concept that's custom-designed for such an approach. From a prologue that introduces us to the lifelong friendship between Julie, Kayla and Samantha—as their respective parents, Lisa (Leslie Mann), Mitchell (John Cena) and Hunter (Ike Barinholtz) send them off on their first day of school—we spin through a montage toward prom night of the girls' senior year of high school. Julie (Kathryn Newton) has decided that she's going to take the opportunity to lose her virginity to her boyfriend, inspiring Kayla (Geraldine Viswanathan) to decide she will also have sex with her prom date, and Sam (Gideon Adlon) decides to join in even though she's pretty sure she's gay. When Lisa discovers a text about this pact, the three parents head out on a joint mission to make sure the trio of deflowerings don't happen.

If the entire premise seems grotesquely retrograde, the script by Brian and Jim Kehoe is perfectly aware of it, including giving an irate speech to Mitchell's wife (Sarayu Blue) about empowering female sexuality. It's a neat little trick that Blockers manages to tap-dance around this idea in a way that makes the parents' machinations even remotely sympathetic.

It also manages to make those machinations pretty funny for much of the running time. It helps to begin with performers as game as Mann and Cena (a more endearing comedy beefcake than even Dwayne Johnson), who get terrific over-the-top moments for their characters. First-time director Kay Cannon (screenwriter for Pitch Perfect and creator of Netflix's late, lamented, tart-tongued Girlboss) allows Mann to show off her slapstick physicality as Lisa tries to escape undetected from Julie's hotel room, while Cena's uptight Mitchell endures a drinking game involving a beer enema. You're also going to get stuff as rudimentary as a chain-reaction vomiting sequence straight out of Stand by Me, but with this solid cast—including Viswanathan, who is a revelation of comedic timing—most of the crude jokes land.

Where they land, however, is in the middle of a story that keeps reminding you it's about both coming-of-age and coming-of-middle-age. Our compassion for the parents is built around their difficulties facing the reality that their little girls aren't little girls any more—that they're going to move on, leaving the adults either alone or confused or full of regret. Meanwhile, the action keeps returning to the young women and their own activities over the course of the evening, which are rarely as entertaining (except when Viswanathan is involved) and keep distracting from the parents and their well-meaning but emotionally fraught efforts at sexual sabotage. Blockers becomes a halting dance where the partners—raunchy jokes and the characters' feelings—keep taking turns stepping on one another's toes.

Eventually, everyone discovers what they need to know about themselves, and about the other people in their lives, and a movie that includes things like fondled testicles and "ass beer" gives way to hugs and tears. Blockers has enough solid laughs to feel like a successful comedy, but movies of this kind always feel like they're apologizing for their lack of decorum, like old-timey sex films had to pretend to be "educational" about marital relations. Sentiment has its place, but I'll take my ass beer with no chaser, thanks.