Tenants of a State Street SRO are given the bum's rush by the RDA in a scramble for new housing. 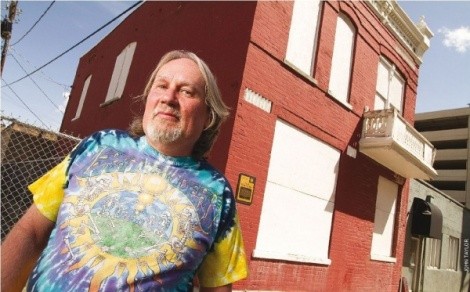 “Home is where the heart is” rings true in a poetic sense. But when determining if an individual is eligible for financial assistance after being displaced from his or her “home,” the definition gets more technical. That’s what residents of the Regis Hotel at 253 S. State found out after being evicted from the low-income, single-room-occupancy hotel on March 10. Poverty advocates say that since developer LaPorte Group’s renovations to the State Street buildings will likely receive an infusion of federal grant money, the owners of the building—the Salt Lake City Redevelopment Agency—should use federal funds to help with tenants’ relocation costs, as much as $5,250 for each of the 25 recently evicted tenants.

With most of the former Regis residents living below the poverty line, they could obviously use the money. But, RDA President D.J. Baxter has another opinion about whether the former tenants would be eligible for financial assistance: “The answer is no,” Baxter says. “This is a hotel, no different than the Marriott or the Sheraton. Relocation assistance provided doesn’t attach to hotel guests.”

It’s a point of contention that low-income advocate Tim Funk of the Crossroads Urban Center says can be fought with a lawsuit, if necessary. He also says the city agency knew this already.

“That’s the reason the bastards from the RDA have tried so hard to get people out of there,” Funk says. “They knew if people were still living there, they would be responsible.” (For more on the ups and downs of the State Street SROs, see City Weekly: “Gimme Shelter,” March 18, 2009; “Bug-Infested SROs,” Sept. 23, 2009; and “Renovating State Street Apartments,” Dec. 2, 2009.)

But since the evictions took place in March, part of the problem may be tracking down the 25 dispersed former Regis residents. “My understanding is about half or less—10 to 12—went to the Rio Grande [subsidized housing]. And of the rest? About five left town, and the rest found local places to rent, doubleup or are at the shelter,” Funk writes in an e-mail.

Before the final evictions in March, the city had for years been preparing to relocate the low-income tenants. In June 2009, a renovated Holiday Inn on 999 S. Main was converted into a 60-unit housing complex called Palmer Court. Two days before the Regis evictions, the RDA also officially re-opened the 49 unit Rio Grande housing single-room occupancy hotel at 428 W. 300 South.

David Hartley, who had lived for two years at the Regis while working off his rent by doing security work for the hotel, was unable to move into Palmer Court or the Rio Grande because of his past criminal record. Hartley moved into a camper trailer in the backyard of his parent’s property in Nevada. The timing worked out because he’s been able to take care of his mother, who is recovering from spinal surgery. But Hartley still bristles over how the city treated him and his fellow tenants. “I wanna go after them, but I’m so stuck,” Hartley says. “I’m just at my camper trailer.”

After living on the streets for three days, Kathleen Johnson and husband William Tyler landed at Palmer Court. The couple is still angry about being evicted in March while commercial tenant The Children’s Theatre, attached to the Regis Hotel and also slated for redevelopment, lists show times extending into May. “That’s why I got so pissed off, kicking us out in middle of winter and keeping The Children’s Theatre open until June,” Johnson says. “They can’t start work on it until the theatre is gone.”

Several tenants who lived in the historic house at 241 Floral St. directly behind the Regis were also displaced at the end of March on short notice.

Former Floral Street resident David Finley valued the home´s convenient downtown location that made it easy to travel to his stagehand jobs at venues like the Capitol Theatre, Abravanel Hall and EnergySolutions Arena. Finley and the other Floral Street residents fought the city to receive even minimal relocation expenses—with Finley receiving $540 for moving expenses and storage unit rental fees.

“We only got it because we pushed the point,” Finley says. “For a lot of the folks at the Regis, the world just pushes them around.”

While Finley ended up in subsidized housing at the Peter Pan apartments at 455 E. 300 South (another LaPorte Group complex), his former housemate, 64-year-old Al Carlson, who also works as a stagehand, had to relocate to South Salt Lake.

“I ended up having to move to 34th and 5th East—completely out of my area,” Carlson says. “Before, I could just [walk] to work. Hell, I’m 64 and drawing Social Security and all that, so it’s really throwing a mess to me.”

RDA President D.J. Baxter is unmoved by the tenants´ complaints, maintaining that the hotel status of the Regis disqualifies former residents for compensation from either the RDA or the developer. “As I understand it, relocation assistance applies only to those who have a lease and are renting a home,” Baxter says.

According to the Uniform Relocation and Real Property Acquisition Policies Act of 1970, a bill passed to help people displaced by federal projects, rental assistance payments up to $5,250 per person are eligible for “90-day or greater tenants.” It is ambiguous as to whether that would include long-term hotel residents.

But even if the former Regis tenants could qualify as tenants by federal guidelines, there’s still another problem—there has been no federal money injected into the project yet. The relocation-assistance formula is based on the assumption that a tenant knows he or she qualifies for assistance. And at this point, no one definitively knows if federal money will be put into the redevelopment.

While the RDA has given a probationary negotiating status to developer Ben Logue of LaPorte Group, Baxter says no formal agreements have been inked. “Before we can actually get to that, [Logue] has to do a fair amount of due diligence—like inspect the buildings and work on putting his own financial package together.” Representatives of LaPorte Group did not return calls for this story.

Even given the difficulty, however, Funk, for one, is not backing down. “There’s no question about either the residency [of the tenants] or when the dollars get assigned,” Funk says. “Taking the bastards to court will be most fun.”