Relax, Have a Craft Beer

Slow pours are perfect for a fast world 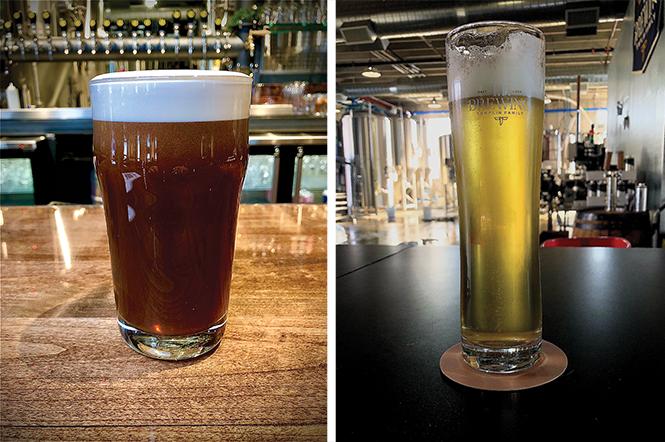 I thought I was in a hurry on this current assignment—too much to do with not a lot of time. However, the barmen at Grid City and TF Brewing during my last visits encouraged me to chill the fuck out and just let the beer happen. Thankfully, I was in the good frame of mind to listen, as the anticipation made for a much better drinking experience.

Damn, that's delicious! Subtle flavors of mouth-watering raspberries emerge with earthy, rich, semi-sweet, dark chocolate up front, followed by some bready, toasted malt. But unlike the aroma, the balance of malt cocoa and raspberry is in perfect harmony—not quite dessert-like, but bready like a cupcake. Mouthfeel is light/medium-bodied and nicely cream,y as the nitro head adds a thick dollop of mouth-clogging goodness. With an ABV of 5.0 percent, there is no alcohol on the palate.

Overall: What an unbelievably delicious beer, thanks to tons of bright, fruity raspberries and earthy, rich, semi-sweet, dark chocolate wrapped up in a pillowy quaff! This one is special, a fantastic beer by Grid City. Highly, highly recommended.

TF Brewing - Heidelberg Edel Pils: This one pours a semi-clear golden/brass color with two-and-a-half fingers of almost-white head, which has decent retention. There is a noble hop presence in the nose that lets you know the beer is not a macro. This is followed up by sweet malts, not of the caramel or toffee type or anything that sometimes comes out of most malts. Here, the malts just smell like sweet malts (albeit with the trademark TF Brewing aroma), no more, no less. The yeast is there and is a bit bready, but, like the rest of the beer, is quite reserved.

Up front, there is just a passing taste of noble hop presence, but it is swallowed up almost instantly by the sweetness of the malt, which here comes across as biscuity, buttery and bready, melding well with the mild fruitiness of the yeast. This bready presence continues even as most of the flavor drops out halfway through the taste, leaving the drinker with a heavy grain presence in the mouth. The herbal hop flavor is here as well, though more pronounced than on the nose. Medium hop bitterness is welcome in brightening up the aftertaste, and makes this a bit crisper—and, thus, more refreshing, which is largely what all pilsners should shoot for. It is a good tasting beer, nonetheless, just a bit off the style.

Overall: This beer is on point. The 5.0 percent body is medium-light, in the sweet spot for pilsners. The carbonation is not as active as it appears in the glass, and so is just below ideally desirable per the style. There is no lingering stickiness and no astringency. This drinks like the well-crafted beer that it is.

You can find nitro beers and pilsners by the mile at every grocery and convenience store, but when the truly special stuff comes around, you definitely have to make the trip to the brewery and get a fresh pour. The Nitro Raspberry Cocoa Brown Ale is poured like a proper Guinness pint, and it can take a while—a good five minutes for mine—for an eye-catching presentation. The same goes for the Heidelberg Edel Pils; slow pours with a pillowy head makes for a much more desirable drinking experience. Hey, it's craft beer. If you can't wait an extra couple seconds, then you're probably looking for a cinnamon whiskey shot anyway. As always, cheers.