U students propose an old-world solution for alleys. 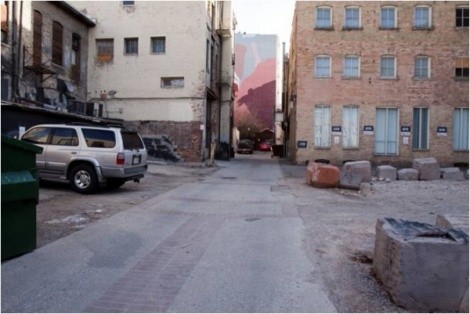 Long before the invention of the automobile, Brigham Young designed Salt Lake City streets to accommodate wheeled transportation: the covered wagon. Today, those wide city streets make car travel within the city relatively easy, but they pose a challenge for designing pedestrian-friendly areas.

One solution city planners have looked at over the years is creating more intimate city blocks between the primary streets. To give those ideas some new juice, a group of students in the University of Utah’s College of Architecture and Planning have provided city officials a vision of several downtown alleyways that could be revitalized as quaint streets with retail and residential components.

“Standing next to these big thoroughfares, psychologically, makes people feel uncomfortable,” says Brenda Scheer, dean of the University of Utah’s College of Architecture and Planning. “Alleys can provide an intimate space, like a small street in Europe or a city where streets aren’t so wide. They can provide Salt Lake with that urban experience.”

The idea for an alleyway renaissance in Salt Lake City didn’t actually originate in a U classroom. It was an idea drafted during Downtown Rising discussions with Scheer and the Salt Lake City Chamber of Commerce. Scheer took the idea from a brainstorming session and brought it to her students, who quickly targeted four spots in downtown and created a sketch of how to transform them into pedestrian-friendly open spaces. The areas targeted include the alleys adjacent to the Rose Wagner Performing Arts Center (138 W. 300 South), the Capitol Theatre (50 W. 200 South), Arrow Press Square (115 S. West Temple) and Exchange Place (between 300 and 400 South, and State and Main).

The Narrows Project, as the students named it, was presented to a work group that included Valda Tarbet of the Salt Lake City Redevelopment Agency and Salt Lake City Planning Director Frank Gray on Dec.15. It’s expected to be brought before the full City Council in the coming months.

Tarbet sees the students’ vision as a good idea, but one with some practical challenges. “They want to take alleyways currently behind existing buildings and turn them into pedestrian-only green spaces. They didn’t think through how to provide services. If it’s a restaurant, how do you get your food in there? How do you get your trash out?”

Tarbet says the plan will bring more emphasis to the issue. However, the city has been struggling with for a long time, even including mid-block walkways in the downtown master plan.

Councilman Luke Garrott, whose District 4 would include the Narrows Project alleys, agrees that the city has long looked at breaking up large city blocks for more walkable thoroughfares. But that’s about all they’ve done.

“Planners have suggested this for decades,” Garrott says. “But the city has been very reluctant with capital improvement money.”

The idea of chopping up larger city blocks also presents a conundrum from a planning perspective. Waiting for private property owners to give up space in their backlots to other businesses could take quite a while.

“You have to do it one property owner at a time,” Tarbet says. “There’s no way the city could go in and just condemn a building in order to create those openings.”

Garrott, however, says capital improvements could make inner-block development happen, but they just haven’t yet in the city because of a lack of “follow through.”

Garrott describes the conundrum as a “chicken and the egg” problem, since the city can’t attract mid-block walkways and private development unless the block is chopped and designed for that kind of development with capital improvements, zoning and even eminent domain if necessary.

“Public entities should be the first ones out there to put in infrastructure and zoning in place for the kinds of development we want,” Garrot says. “Everyone knows that, but hasn’t been willing to make the investment in a way to make the downtown more pedestrian-scaled.”

Ultimately, a cash investment in this economy may be the biggest obstacle.

“Budget implications really are where the rubber hits the road,” Garrott says. “Or, in this case, where the shoe leather hits the sidewalk.” CW