Hunter and sportsman that he is, Tim Bridgewater’s on the scent. Revolution. He can feel it. He’s part of the movement, a movement that’s going to take back America, by God, and not just from the damned Democrats.

“I think that there’s an anti-incumbent sentiment among voters in the country,” says Bridgewater, one of a growing number of Republican challengers to U.S. Sen. Bob Bennett, and perhaps the most vocal in the call to sweep out the old, old guard. Oh, did he mention that Bennett is 76?

Bridgewater is, ahem, younger than that. At 49, he’s a tall, brawny former football player whose handle is The Raspy Voice, a reference to his perpetual hoarseness. He doesn’t really look the part of a financial wonk, although he is.

Bridgewater (TimBridgewater.com) just returned from Washington, D.C., where he huddled at conservative think tanks about The Plan. It’s a plan to wrest control from those tax-and-spend Dems who are “taking too much money from the public for unlimited government,” Bridgewater says.

“Kentucky State Senate race is a harbinger of things to come across the country,” he Tweets. In that special Senate election, voters there chose a Republican over a Democrat in a heavily Democratic district, ostensibly because the GOP had successfully “nationalized” the race.

Lacking any “sexy” hot-point issues like immigration or weapons of mass destruction, this race has become one of economics—and core Republican values. And that is part of the national debate. 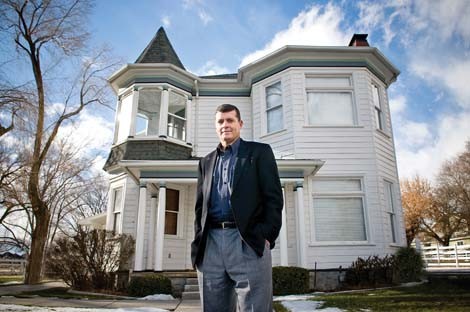 Bridgewater is heading into his third race for national office since returning to Utah in 1999. His chances of winning this time got suddenly better when the two top challengers—first Attorney General Mark Shurtleff and then Merit Medical founder Fred Lampropolous—dropped out. Shurtleff had campaigned for well over a year before withdrawing because of family issues. Lampropolous joined the race in late November for one bittersweet week before backing out. Lampropolous actually had a $4.4 million proposition waiting in which the state offered an incentive package to increase jobs. “This is the biggest momand-pop store in the state,” says longtime friend and state GOP chairman Dave Hansen. And since Lampropolous is a hands-on owner, Hansen says, he likely would have had to give up Merit to run.

Even with Shurtleff and Lampropolous exiting, Bridgewater is still watching the field grow. On Twitter, he hailed an announcement from Mike Lee, who was general counsel to former Gov. Jon Huntsman Jr., even though he hasn’t declared yet. There’s been talk of outgoing Provo Mayor Lewis Billings and 3rd District Rep. Jason Chaffetz joining the race, too.

Already running is a gaggle of fun and fanciful characters. There’s Cherilyn Eagar (EagarforSenate.com), a self-professed expert on the conspiratorial evils of the high school International Baccalaureate Program, who quips in the style of former Alaska Gov. Sarah Palin and fashions herself an anti-feminist. There’s James Russell Williams III (VoteforJamesWilliams.com), a little-known party worker who “is fighting to restore Constitutional principles,” according to his Website, supports traditional families and wants to help small business—and who’s been pretty much ignored in the media. And in late November, even ex-con Cody Judy (CodyJudy.us)—whose 1993 attack on LDS Apostle Howard W. Hunter shot him to infamy—announced he was running. Judy has already run unsuccessfully for Congress multiple times and for the U.S. presidency in 2008.

Had Shurtleff or Lampropolous remained in the race, the Senate race might have been more mainstream. But as the right wing lines up, it’s becoming more and more evident that Bennett’s on the defense against a philosophical faction, says Matthew Burbank, chair of the University of Utah’s political science department.

“Having a sitting attorney general and Fred Lampropolous—a fairly heavyweight challenger—is an indication there’s some real dissatisfaction,” Burbank says. But neither Shurtleff nor Lampropolous would likely have quelled that dissatisfaction. They just weren’t anti-establishment enough.

“Clearly the odd thing, from my perspective, is that the dissatisfaction is from people quite conservative, saying [Bennett is] too much a Washington insider and too willing to make deals,” Burbank says.

Purity Rings
So, enter the purists: The constitutional die-hards, the Tea Party Patriots, Glenn Beck’s “9.12 Project” disciples and just about anyone else willing to Tweet about the sad state of the nation and the end of democracy as we know it.

This sort of drive toward purity typically happens after a political party suffers defeat, Burbank says. Barack Obama’s victory in 2008 was exactly the slap in the face that conservative Republicans needed to fuel their jets. That they’re angry is an understatement. That their anger is turned toward their own incumbents is curious.

The purists may already have had an effect on the Senate campaign, spurring Bennett to release his book, Leap of Faith, just as attack ads from the national right-wing Club for Growth (ClubForGrowth.org) were unleashed. In his book, Bennett declares his deep and abiding faith in the truth of the Book of Mormon—a handy way of saying that he’s one of the white, male, Mormon gang. Still, it may not be enough, and the question remains as to whether any in the crowd of upstart conservatives can oust the elder statesman.

Club for Growth is helping to ask the questions with at least two scathing TV ads. “We were trying to educate the folks in Utah about what we thought were his pretty serious flaws in health care … and whether he is a real economic conservative at all,” says Mike Connolly, Club for Growth spokesman.

That, in effect, is a clarion call to his opponents. “Bennett is not a bad guy,” says Bridgewater. That’s what all the challengers are saying. “He’s not corrupt, but he hasn’t represented this state as well as I will.”

For sure, Bridgewater wants to represent the state. He ran in 2002 and 2004 for the Republican nomination in the Congressional 2nd District, which would have earned him a chance to run against Rep. Jim Matheson, D-Utah.