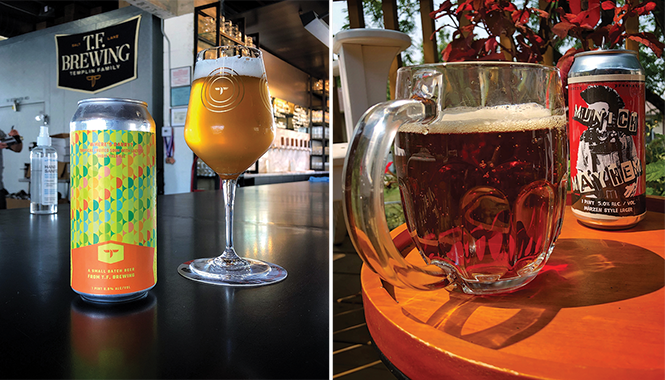 Epic - Munich Mayhem: I think this may be the first of the Oktoberfest-style beers from our market to hit shelves this season. It seems like the autumn beers hit earlier and earlier every year, but they don't; the damn weather just makes it seem so.

This lager pours a bright, clear golden-amber color, sporting a finger-sized crown of foamy, bone white-colored head. It dissipates over the next couple of minutes, eventually being reduced to a smooth, creamy cap and collar, accompanied by an uninterrupted ring of lovely lacing. Biscuity malts, toasted grains and nuts emerge on the nose, along with a pronounced caramelized sugar-and-honey sweetness. Mildly fruity too, with suggestions of apple/pear, and mild hints of floral hops. Nothing too exciting, but appropriate for the style.

The taste presents a properly-constructed marzen for sure, with a clean malt bill augmented by restrained noble hop presence. The initial flavor consists of toasted grains, caramel and some bready, biscuity malts, with a slight nutty character. Orchard fruit esters remain noticeable, but are subtle in magnitude when compared to the nose. Some grassy, floral hop bitterness causes the profile to take an earthy turn at the finish; the aftertaste is a little nutty, with some quickly-fading caramel sweetness leaving the mouth off-dry. Nice weight in the mouth, medium-bodied, with middling carbonation levels that feel lively on the palate. Refreshing, and a pleasure to drink.

Overall: This excellent marzen indicates why Epic maintains its solid reputation for being one of Utah's best breweries. Their marzen is impressive, a traditional-style lager that all fans of the style should keep their eyes peeled for. It's a clean-tasting, extremely drinkable malt-forward beer that I am glad to have guzzled, and will enjoy throughout the autumn.

Templin Family Brewery - Where's Barry?: This incarnation of TF's "Barry series" of fruited sours gets away from the berries that are normally front and center, and opts for a more tropical vibe this time around. That means a nice unfiltered mango-colored body with a thin white cappuccino-foam head that hangs around as a patchy lace blanket. If you put a blindfold on me and asked me what was in this glass, I would say mango and pineapple; it smells big and fresh like a fruit salad that's full of sweet mango pulp and dripping pineapple.

I was not expecting that this beer would be such a fruit bomb. This beer's base is sour at its heart, but the fruit enhances it so well that it's hard to tell where the pineapple and the mango seem to "alpha and omega" themselves. The brewers tell me that there's a small amount of lactose in this to balance it all out. You really have to dig to find it, though. It's that subtle, which is brilliant, because if it wasn't there, you might find the pineapple a bit overwhelming. Either way, the true flavors are a maelstrom of sour-candy character. Towards the end you get some puckering passion fruit that adds a musty diversion from the previous flavors.

Overall: While this is a fruity beer, it's not for the timid. It will hit you hard with a flavor assault if you're not careful. The 6.8 alcohol is hard to detect, and if you have even a hint of a canker sore in your mouth, the pineapple acidity may roll your eyes back into your brain. I hope you have as much fun with this as I did.

Epic's Munich Mayhem looks to be replacing their Festdevious, another marzen that's been around since Epic's early days. It comes in slightly lighter at 5.0 percent compared to its older sibling's 6.6 percent. You can find it at the brewery in 16-oz. cans. Where's Barry is also in 16-oz. cans, and is exclusive to the Templin Family Brewery. As always, cheers.