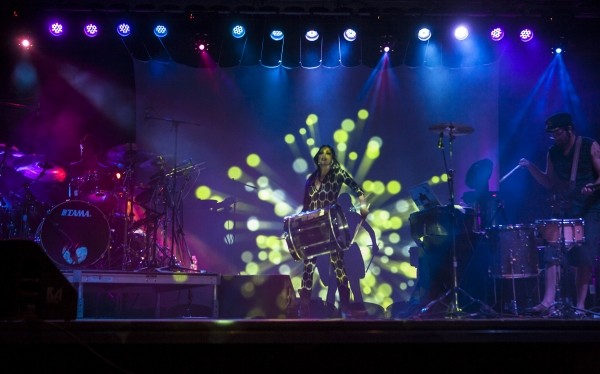 That essentially sums up the eighth-annual festival: setting a decent intention, which then turned primal.

With a location change to Jenk Star Ranch outside of Green River also came the music festival’s evolution to a “consciousness celebration” with an abundance of speakers, panels, workshops, films and the Sustainable Living Roadshow. It was a lofty enterprise and was, in fact, better than in years past, so hats off to the new partnership for pulling this together in a matter of four months.

However, how can people raise their vibrations amid 70 mph gusts during a weekend-long windstorm, which ripped campsites to pieces and knocked over Porta-Potties both empty and occupied? As a field guide in the Utah desert for over two years, I’ve never seen anything as extreme as Saturday’s conditions. Only a heavy dose of tequila and car sitting could abate it, and people still left in droves that night. Other significant oversights—like the festival not restocking water in the camping areas after it ran out on Friday—and the logistical debacle of show times being askew (and a lack of printed schedules) also put a strain on everyone.

City Weekly copy editor Kolbie Stonehocker had a, shall I say, memorable time. “Whenever someone found out it was my first-ever music festival, they’d say, ‘Whoa, Desert Rocks is a hell of a festival to be your first.’ And weren’t they ever right!” she wrote in her review.

Like everybody else, she and I focused on surviving and coping in our respective camps rather than “consciousness.” While this limited opportunities to experience the extra content, it created a community mindset where strangers were helping each other significantly. I will certainly not forget this festival; we all deserve a T-shirt that reads “I Survived Desert Rocks 2012.”

I don’t want to paint the picture as all bad, though. When the weather wasn’t a blight or forcing performers to cancel (notably Lucent Dossier Experience and RJD2), there were positive moments.

Stonehocker and I agree that the performance highlight was Phaedroid. “[It was] a psychedelic spectacle … the stage name for Android Jones’ spectacular [projected] art and music combined with gorgeous dancing by his wife, Phaedra. By far the most beautiful moment I experienced at the festival, with whirling snowflakes, butterfly wings, growing plants and more, she seemed to meld into the artwork, resulting in a stunning example of living, breathing art,” wrote Stonehocker in her review.

Led by the belly-dancing goddess Zoe Jakes, Beats Antique followed and helped set the wind-lulled eve on fire. The dizzied celebrators got carnal on the dusty dance floor and carried that feeling deep into the night. Music at Desert Rocks, as in years past, didn’t stop until the sun came up.

During Saturday’s midday heat and wind, my camp of eight joined 100 or so other festival-goers at the nearby Green River, with its air of hippie spring break. The icy water and solace under the shade—there are no trees at Jenk Star Ranch—were essential. When we came back and braved the festival, the only safe zone was the film dome. I caught The Spirit Molecule, a film directed by Mitch Schultz about mind-bending ayawaska trips, and the Q&A afterward helped me realize that the additional element of conscious content was pretty special. That said, due to weather and logistics, and despite my excitement, I attended zero workshops.

If Desert Rocks Festival continues in this direction, and I hope it does, some things obviously need to change. On the bright side, it can only get better.

“I will never forget you, Desert Rocks,” Stonehocker wrote. “I brought home enough sand in my clothes and hair to remember you forever.”