Revolutions For Fun and Profit 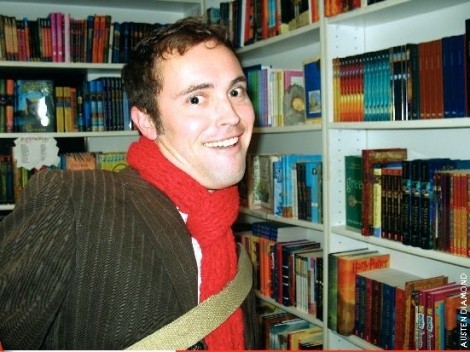 Salt Lake City native Ryan Shattuck describes his selfpublished first book as an ideal guidebook for someone who wants an ideal-er revolution. Revolutions for Fun and Profit aids the aspiring revolutionary to choose a name, color-coordinate and pick the perfect mood-setting anthem for their revolution—plus more candid commentary to ensure success in proletariat uprisings, endeavors or bake sales.

With offhand humor in short doses, Revolutions is perfect bus-reading material—which, politely, means a book for reading on the crapper. The book’s ludicrousness takes the reader out of the moment, and sometimes even out of the sentence, leaving you wondering what the hell Shattuck is talking about.

If the book is read as a legitimate guidebook, the joke is lost. If read cover to cover, it becomes frustrating. Adjust your expectations to make it enjoyable.

“Approximately 97 percent of the book is nonsense,” said foreword-writer Kristen Hintz during a local author showcase at The King’s English. This isn’t a book of facts.

It wasn’t Shattuck’s intent to write straightforward non-fiction: “There are already books like that, about history in general. I wanted to go way out there. It’s for the same people who read The Onion and don’t walk away disappointed,” Shattuck says.

Shattuck isn’t necessarily qualified to write a revolutionary guidebook—after all, he’s never started his own. But, writing “in character,” the narrator is a whimsical, snarky, arm-chair revolutionary who is mostly over-the-top. Think of him as a quirky university political science professor who rarely actually did anything political, but informs amusingly, nevertheless.

“I can’t necessarily tell someone why they should start a revolution more than why they should fall in love. [The revolutionary desire] comes from a place of frustration and unhappiness and wanting to change their situation. If you’re happy with the status quo, technology, religion, politics and bullshit, then you won’t do anything,” says Shattuck, who makes fun of all the aforementioned, and more, throughout the book’s three sections.

The first section— “History of Revolutions:

Cowardice, Conmen and Complacency” —drones on with an over-abundance of nonsense-washed facts about various revolutions and revolutionaries. Building speed, the second—“Embrace the Hate: Learning to Love the Inner Revolutionary” —begins the quest of starting one’s own revolution, including its form and function, creating rules and regulations and how to inform loved ones of your new divergent path. In the highlight of the section, “Family Tree of Revolutions” (p. 73), the origin of all revolutions is revealed as either vegetable, animal or mineral. Eventually, all revolutions evolve to become either the Unemployment Revolution, Sexual Revolution or Killer Robot Revolution— opposed to the Nice Robot Revolution, which (use your imagination) becomes a Sexual Revolution.

And, the final section—“The Brass Tacks of a Revolution: Because Somebody Broke the Stapler”—is the funniest and most engaging. You learn that fat camps are great for recruiting, but stay away from used-car lots. Shattuck relates the pros and cons of various pop-culture and revolutionary slogans. Provided is a diagram with a slew of slogans, each divided three ways into columns for mixing-and-matching to propagate your own propaganda. One amalgamation I came up with was, “We’re here, we’re | in you’re mouth, and not in | the bourgeois republic.”

Interspersed throughout the text are quizzes and reviews; however, this isn’t for a grade, only cheap laughs, so no need to cram. Also, informing with fine farce are an assortment of “Revolutionary Fun Facts,” such as: The word revolution comes from a Spanish man nicknamed “Bitch Tits,” or: The Women’s Suffrage Movement of 1910 was sponsored by Trojan brand condoms. At the book’s beginning, there’s a warning that it might be offensive.

At times, Shattuck’s quips are laughout-loud, others warrent a guffaw, but mainly glance-overs and scoffs. There’s approximately a laugh every 9.32 pages— but, then again, that’s nonsense as well. The laugh-less bon mots become almost predictable, ending most paragraphs.

But, after reading once through, it’s even enjoyable to flip to a random chapter (in the bathroom) and read a couple of paragraphs. Like kambucha, it’s an acquired taste, better after the first time and good for digestion.

One question remained: Where does a Salt Lake City revolution begin? “The [Main] Libarary. It’s the most revolutionary place, because that’s where a lot of ideas start,” Shattuck says. “Whenever something happens, that’s where”— everything from the Utah Pride Festival to selecting the Utah Citizens’ Candidate.

Shattuck began writing Revolutions in 2007 (at the library). After two years of trying to land a publishing deal, he´d received enough rejection letters to wallpaper a house—or start a riot-sized bonfire. In a sense, self-publishing is revolutionary. As his own boss—in control, on his time and on his dime—he finished with a book worthy of coffee table (or toilet top) placement.