Brand-new RPM Brewing's beers are on the fast track. 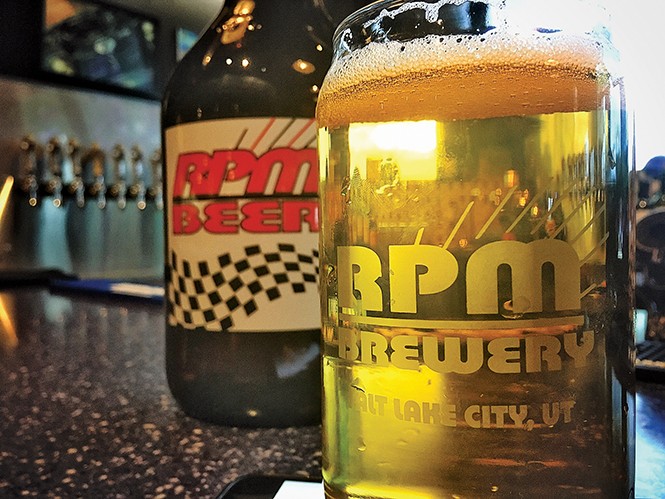 Back in October, I got the opportunity to hang out with the boys at RPM Brewing Co. in Salt Lake City. At that time, their beers were just churning away in the fermentors, waiting for their debuts. Now the time has come to check out what Utah's newest brewery has on its taps.

P1 Pilsner: This is a classic-looking lager, true to form and quite nice. It poured a very clear golden body with a thin cap of white head that quickly dissipated. The aromas are faint, with a bit of malt sweetness, grass and floral hops. It's an American-style Pilsner with an aroma similar to its German counterparts. The flavor begins lightly bitter, with a grainy and softly sweet malt presence balancing floral, spicy Noble hop flavors. This moves into a medium bitter middle, with notes of grassy, floral, spicy Noble-like hops and a light sweetness from malt. The finish is medium-dry, with the hop flavors continuing alongside light grainy malt and biscuit-like malt.

Overall: This is a crisp, flavorful, straightforward Pilsner. It doesn't have a wealth of complexity, which is perfectly fine for the style. P1 Pilsner will be available for purchase in grocery and convenience stores around the beginning of the new year. It's the first RPM beer to debut in 12-ounce cans.

Corkscrew Pale Ale: This pale ale is chestnut-colored with amber hues, while the head is a finger high and an eggshell shade of white. From the aroma, I get the sense that this is more of an English-style pale ale. The hops give it a pleasant earthiness to go with its dry apricot and orange/marmalade esters, while the malts bring a subtle caramel character. The first sip seems musty, then transitions into more caramel and orange peel. Floral notes come next, with a bit of pine bitterness. The finish for the most part is dry, with just a smidge of burnt caramel.

Overall: I get the impression that this is an American pale ale that drifts into English style, the two significant differences being citrus and pine bitterness (American) versus floral and herbal (English). As American styles are all the rage right now, a little blurring of the lines is a nice change of pace on my palate.

Bent Piston Porter: It pours dark, as you'd expect from a porter. The colors are deep reddish brown with a single finger of dense khaki head. Upon first whiff, I don't get much, then aromas of cocoa, coffee and herbal grass begin to emerge as my sniffer turns it up to 11. The taste takes its cues from the nose, with dark chocolate, coffee and toast. From there, a bit of caramel sweetness emerges—not enough to make it sweet, just to balance out the more charred aspects of the malt. The end delivers herbal hops to stave off any cloying sugars. The finish is very clean, almost lager-like, and the alcohol is virtually non-existent with zero warming present, as expected of four percent beer.

The bottom line: The clean, light flavors in this beer give it an almost schwarzbier (dark lager) quality, and it has all-around good robust characters. While it's not terribly complex, it does provide all of the components to draw in macro-beer drinkers looking to expand their tastes. It's an enjoyable offering.

These are just three of the house beers RPM currently offers. During my recent visit, there were more than 10 beer styles to choose from, including an East Coast IPA, an IPL and a saison. RPM's restaurant, The Garage, is located at 1122 E. Draper Parkway in Draper. As always, cheers!