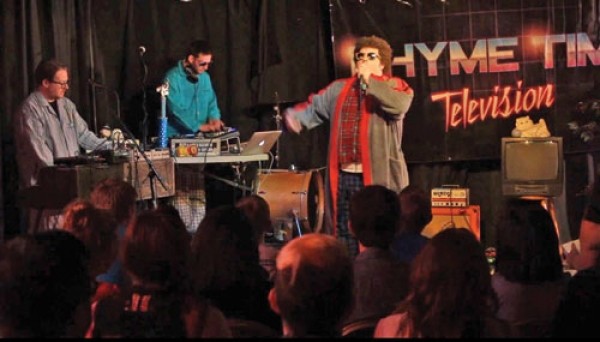 After a punch sent the piñata shaped like Michelangelo the Teenage Mutant Ninja Turtle flying off the string holding it to the ceiling, rapper Donnie Bonelli picked it up from its landing place on the stage and stood, cowering, holding it in the air and trying to avoid the fists swinging dangerously close to his face on their way to the paper-covered target. All it took was a couple more hits by a guy with the height and beard of Gregor Clegane for the piñata to finally get blown apart, to cheers from the audience.

It wasn’t a kid’s birthday party gone bizarrely wrong, but a round of Punch the Piñata, one of the games on the new variety show Rhyme Time Television, the first episode of which was released June 1 on RhymeTimeTelevision.com. Filmed live in front of a studio audience at Muse Music Cafe in Provo, Rhyme Time Television is the brainchild of Salt Lake City emcee Scott Knopf, aka Atheist, who now also goes by the moniker Rhyme Time. Featuring a mix of celebrity interviews, live music, games, cartoons and stand-up comedy, the show is what would happen if The Tonight Show were filmed in Wayne and Garth’s basement and aired on Channel 62 when it was run by Weird Al Yankovic in UHF, a cult classic Knopf cites as one his inspirations for the project.

On a stage decorated with Savers relics like a tacky cat figurine, dusty sports trophies and an old TV—containing a beat-up VHS copy of The ABCs of Dutch Oven Cooking—Knopf begins all episodes of the show by rapping the theme song, accompanied by the other members of the band Rhyme Time Television: This Guy (aka Chance Clift or Chance Lewis) on the keyboards and synths, and Dino Dino (aka DJ SkratchMo or Gabe Ghent) on the turntables and drum kit, who also play original jingles that introduce various segments of the show. All three musicians also belong to the rap crew House of Lewis, but except for its strong sense of nostalgia, Rhyme Time Television—the show as well as the band of the same name—is unlike any project they’ve been part of before.

With an album titled Topanga—named after a character from the ’90s sitcom Boy Meets World—Knopf is well known for resurrecting the era of Super Nintendos, VCRs and TGIF. “I’m super nostalgia-based in my life,” he says. “I love nostalgic stuff more than getting new stuff to be nostalgic about later. I love ’80s stuff; I love ’90s stuff.” Rhyme Time Television takes that affection and expands it past the scope that’s possible for any rap album, to something that members of the studio audience—kids, parents and everyone in between—can fully participate in.

The Rhyme Time Television project is a new direction for Atheist, a name that’s often polarizing, especially in Utah County. When Knopf was brainstorming about his next album, he says, “I thought, ‘Let’s do something different; let’s really do something for families.’ Utah is such a family-oriented state, and Provo is such a family-oriented town, and they want clean lyrics,” which will be heard on Rhyme Time Television’s upcoming debut album, Gnarly!, set for release Aug. 8. Knopf says he still plans on doing shows as Atheist, but on Rhyme Time Television and with his new band, he’s Rhyme Time. “If you see me wearing pajamas, I’m Rhyme Time,” he says. “If you see me wearing a suit jacket, I’m Atheist.”

It’s not a coincidence that Knopf and his bandmates wear pajamas onstage (every episode culminates in an audience-wide pillow fight) or that all the celebrity guests—notable locals like comedian Jay Whittaker and actor Whit Hertford (Full House, Jurassic Park)—sit on blankets instead of in chairs as they’re interviewed onstage. “We really wanted it to feel like an ’80s slumber party,” says floor manager/coordinator Bonelli. “All of us grew up in the ’80s, and we were kids going to those slumber parties.”

One of the show’s most endearing qualities is its unpredictability, especially if you’re watching a live taping. The extreme DIY nature of Rhyme Time Television allows for funny unscripted moments, such as Knopf giving an improvised monologue on getting viciously attacked by a rooster when he was a kid, or a baby trying to pick up the cat figurine during the game Pizza Pizza Pizza Time (essentially a pizza-eating contest). “For everything that we kind of messed up or went wrong, another thing went unexpectedly great,” Clift says. “I think if [the show] has that kind of loose vibe on the actual final edit, that will be a good thing.” The next episode will be released July 1, and the next taping will be in August.

The experience of being an audience member in a Rhyme Time Television episode is something Knopf says he hopes will stick in people’s minds as much as the ’80s and ’90s have stuck with him. “I’m so nostalgia-based,” he says, “that I want to make stuff that kids will be nostalgic for when they’re my age.”