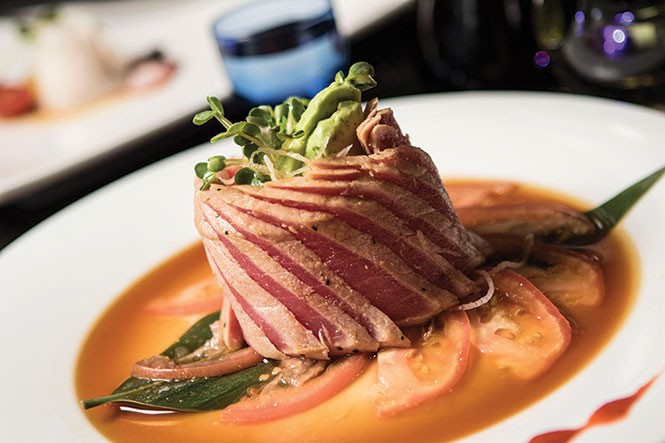 Not far from the shiny new Holladay Village complex—housing Caputo's Deli, Copper Kitchen, Taqueria 27, Tonyburgers, 3 Cups and other independent businesses—is Rice Basil Sushi Bar & Asian Fusion Cuisine. It's easy to miss, since it's tucked away and part of a larger commercial building, but Rice Basil is well worth discovering.

A while back, Rice Basil moved from its original home on State Street to this space that was formerly Sunset Boulevard Café. Some of the café's décor and design remains, and that's a good thing. It's a very classy interior and ambiance, but one that is also cozy and comfortable. Soft, warm hues of brown, orange, gold and tan dominate the décor and lighting scheme, and a large fireplace adds to the glow of the restaurant. It's an interesting mix of classic and modern, with zebra-patterned chair cushions juxtaposed with dark woods and traditional detailing. It's not exactly dazzling, but Rice Basil is just one of the most inviting Salt Lake valley eateries I can think of.

On our visits, the experience has always started on a high note, being seated by a wonderfully friendly and accommodating hostess. From there, the service continues—friendly and flawless—by employees such as Jordan (a server who would easily fit into Michelin-starred restaurants), James, Jeremy and others. Service at Rice Basil is unhurried, accommodating and thoroughly professional—a happy surprise, to be honest.

I have to confess that the word "fusion" doesn't hold much culinary appeal for me. Most of the fusion cuisine I've endured has been ill-conceived, and a much better idea on paper than on the plate. So, I was a bit hesitant about eating at a place called Rice Basil Sushi & Asian Fusion Cuisine. Thankfully, though, fusion dishes account for only a small portion of the menu, which is dominated more by sushi, nigiri, sashimi, maki rolls, bento boxes and classic Japanese entrées such as donburi, tempura, teriyaki and the like.

The first dish we ordered was the Jalapeño Hamachi ($12) appetizer. I was stunned at the presentation. Were we at Nobu? It was six pieces of raw hamachi (yellowtail/amberjack) served on a square black stone tile. Each piece of hamachi was topped with thin-sliced radish, jalapeño and a tiny parsley leaf. Alongside was the chef's special yuzu sauce, six tiny dots of citrus mayo, fresh ginger and wasabi. The contrast of the food on the black plate was gorgeous, as were the flavors of the combined ingredients. However, you might want to remove the incendiary jalapeños if you don't love spicy food.

Another sensational appetizer—and one that could have easily been consigned to the "silly" shelf—is Rice Basil's tuna tartare ($8). Why silly? Well, you see, the tuna comes served on avocado slices atop Pringles potato crisps, garnished with micro-sprouts. It would be a silly idea, except for the fact that it works. The crunchiness of the Pringles and their slight saltiness actually make for a good tuna tartare partner. And, it's also very functional: The chips are a terrific hand-held delivery device for the tuna.

An equally artful presentation of sashimi—a 20-piece sashimi platter ($35)—piqued my interest in Rice Basil's chef. The chef/owner is Batsaikhan Ariunbold, who hails from Mongolia. Friends and regulars at Rice Basil know him simply as "Soy." He's worked at a number of Japanese restaurants here but is knocking it out of the park at his own place. I do have to say, though, that I was a bit disappointed in the (chef's choice) sashimi platter. Since it was a 20-piece platter being shared by two people, I just assumed there would be 10 different types of sashimi: two per person. Instead, there were five pieces each of four different types of sashimi: salmon, tuna (maguro), escolar and yellowtail. There was nothing at all wrong with the high-quality, very fresh sashimi and presentation (or the price, which is very reasonable); I just expected a more varied assortment.

For cooked dishes, the saba shioyaki ($17) is hard to top. It's two whole skin-on grilled mackerel fillets, served on a bed of assorted sauteed vegetables. This is a less-is-more type of entrée, wherein the chef allows the beautiful mackerel flavors to shine through without burying them in unnecessary sauces or garnishes.

For the quality of food, ambiance, service and such, the prices at Rice Basil strike me as very reasonable. Beef donburi, for example, is a mere $14—a generous portion of steamed rice topped with tender slices of beef along with tempura vegetables and teriyaki-tempura sauce. During lunch—served Monday through Saturday from 11 a.m. to 4 p.m.—Bento boxes are $9, as are sushi lunch specials. Most nigiri is priced at $6 for two pieces, and rolls run from $5 to $11.

As with almost all of chef Soy's dishes, desserts at Rice Basil are eye-poppingly beautiful works of art. His Key Lime Calypso ($8), for example, is Key lime mousse topped with vanilla ganache, white chocolate chips, a chocolate wave texture and a white and dark chocolate diamond. Bright swooshes of strawberry and Key lime purée add color to the plate. Simply gorgeous.

For all of you lovers of sushi and modern Asian cuisine, there's an important new player in town: Batsaikhan Ariunbold's Rice Basil.