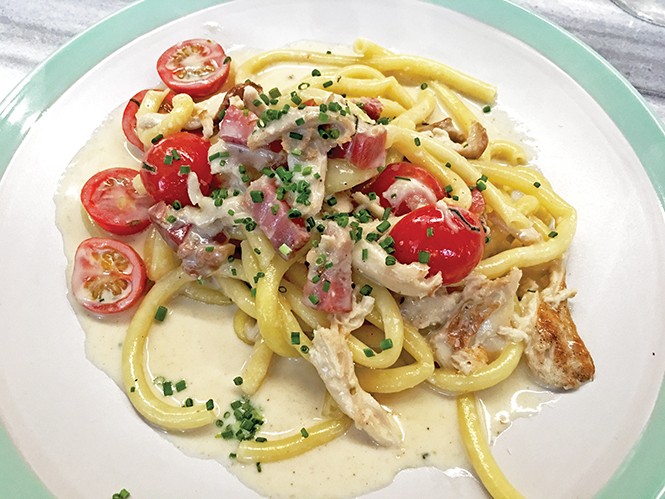 It's a great time to be a restaurant critic in Utah. It seems almost like ancient history now, but around the time of the 2002 Winter Olympics, there was a spike in new and notable restaurants—many of which were opened to take advantage of the influx of tourists, as well as the publicity and marketing that swirled around hosting the Olympic games. However, many of those restaurants were short-lived.

More recently, there's been a renaissance of interesting, independent eateries opening in Salt Lake City. It's a sort of golden age for local food writers, and sometimes I have to pinch myself to remember that I'm not living in Portland or Berkeley. For example, just look at the culinary corridor that is Harvey Milk Boulevard (aka 900 South). On that single street, diners can enjoy restaurants and bars such as Water Witch, Kitchen, Veneto, Pig & a Jelly Jar, Manolis, Pago, Kitchen, Trio, Pizza Nono, Mazza, East Liberty Tap House, Chanon Thai Café, recently relocated Meditrina and more. Not all these businesses are new, but many have opened in the past year or so.

The next up-and-coming hot spot for local foodies seems to be Regent Street—a project of the Salt Lake City Redevelopment Agency and surrounding property owners that is parallel to Main Street downtown, directly behind the new Eccles Theater. If you're looking for a place to enjoy a meal before or after an Eccles show, it's quite convenient. I've heard that Blaze Pizzeria and some other retail and chain outfits will be moving in, but I'm especially looking forward to the new independent eateries, such as Viet Pham's soon-to-open Pretty Bird, where fried chicken will be the calling card.

Prior to a recent Experience Hendrix show at the Eccles Theater, I made my first visit to Fireside on Regent—and was bowled over. The restaurant specializes in wood-fired pizzas, housemade and an eclectic array of plates called "Urban Picnic" items, plus salads and desserts. A great place to begin a meal is with a quartet of Caviar Pillows ($14). The first time I tasted chef/owner Michael Richey's airy but crisp, taro and potato puffs was when he was cooking at Pago, then later during his stint at Solitude's St. Bernard, where he also cooked for the Wasatch Mountain Dinner Series. The appetizer's topped with American sturgeon caviar, crème and minced chives.

One of the best Urban Picnic plates is one that winemaker Will Bucklin—at a recent wine tasting luncheon—described as "amazing." He was talking about the house-pulled mozzarella dish ($10) and was spot-on. It's a glorious taste of springtime: silky, soft, housemade mozzarella atop thin-sliced zucchini rounds, bathed in a purée (almost a soup, really) of basil, zucchini and parsley, sprinkled with minced chives and crunchy olive tapenade. It's the epitome of fresh.

Gorgeous chunks of deep red sashimi-grade tuna make up the tuna ($15), where Richey doesn't overdo the , allowing the flavorful fish to grab the spotlight. It's dressed simply with pieces of avocado and grapefruit segments, plus and more snipped chives.

The pasta dishes I enjoyed were nothing short of phenomenal. The kitchen is equipped with an imported Italian pasta extruder, which produces fresh noodles with tremendous taste and texture. Of course, the pasta must be cooked perfectly, too, which it is. During the Wasatch Mountain series, I got my first taste of Richey's bucatini with rabbit, and I'm glad he's brought that recipe with him. Shredded, tender pieces of braised rabbit are tossed in a sparse, light sage and garlic cream sauce—just enough to flavor the thick bucatini pasta without burying its flavor. The mélange also includes hefty chunks of pancetta, halved hothouse cherry tomatoes and minced chives.

Guests have the option of sitting at tables lining one side of the rectangular or grabbing seats at the counter, which provides an up-close-and-personal view of the kitchen. Visually, the centerpiece of this bright and airy eatery is the tiled, wood-fired pizza oven, and I love the minimalist simplicity of the décor—white walls, and tables with dark flooring and chairs—plus a few well-placed pieces of art. But the food takes here.

The menu typically lists five pizza choices; this is not a "create your own" pizza joint. The dough, made with 85 percent 00 flour and 15 percent local whole wheat flour from Lehi Roller Mills, is extraordinary. It bubbles and chars beautifully, and has perfect consistency throughout every bite. To get the best sense of that amazing crust, order the Milk Run ($19). It's essentially a Margherita pizza, with nothing more than homemade tomato sauce, house-pulled mozzarella and basil. The first time I tried it, I found the cheese to be overly salty, but on a second visit, it seemed spot-on. For something less typical, but equally delicious, order the Tuscarora ($14)—a pizza topped with crisp sunchoke pieces, fingerling potato, pancetta and housemade ricotta and mozzarella.

Superb service and a well-thought-out beverage list to the appeal of this new but already magnificent addition to the downtown dining scene.