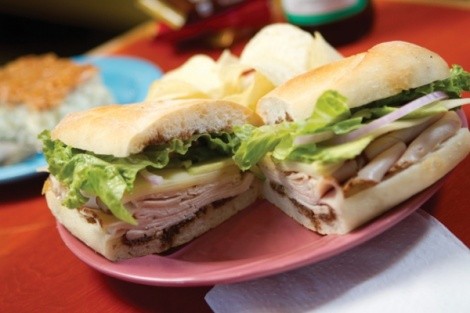 Restaurants in the 300 South and Main Street area of downtown Salt Lake City have a voracious built-in clientele: hungry City Weekly employees. So, whenever a new eatery opens in the neighborhood, we descend on the place like locusts in a feeding frenzy. There are lots of great places in and around Third & Main to grab a bite, and I’ve written about most of them here. But two relatively new businesses have made the downtown lunch options even tastier: Toaster’s and Rich’s. Welcome to the neighborhood!


Toaster's Deli
There’s a friendly vibe at Toaster’s that’s no stretch to call neighborly. The service is prompt and always accompanied with a smile. Although Toaster’s is a walk-up-and-place-your order eatery--the food is then delivered to your table--it’s the kind of place where you actually might want to tip for the warm service. And, at Toaster’s, asking for a little extra balsamic on your sammy or to go light on the mayo doesn’t require a summit meeting. Simply ask and ye shall receive, graciously. Why, it’s almost as if these folks want you to come back. What a concept!

As opposed to some of its franchised neighbors, Toaster’s, which also continued to operate its original location on 200 South, is independent and locally owned. The bread--which is the heart and soul of any great sandwich--comes from Vosen’s Bread Paradise, another independent and locally owned enterprise. Thus, each and every sandwich at Toaster’s is given a hearty head start: They’re made with Vosen’s ciabatta bread, which has a crispy crust and a moist, soft interior. From there, it’s up to you to choose from a wide array of sandwich choices, from a basic ham and Havarti or garlic herb chicken sandwich, to a neo-classical Reuben or turkey avocado. The options, while not endless, are plentiful. And, Toaster’s also offers hearty salads and warm soups that change daily, plus bagels and croissants for breakfast.

It was City Weekly TV guy Bill Frost who first turned me on to Toaster’s when he suggested the turkey and avocado sandwich. Frost doesn’t seem like an avocado guy; I had him pegged as a burger guy, through and through. Well, his recommendation was spot-on. One of the best sandwiches I’ve tasted anywhere is Toaster’s’ heart-healthy thinly sliced white turkey meat and thick slices of fresh avocado ($6.90), drizzled with balsamic vinegar--as simple as it is delicious. Not quite so heart-healthy, but equally delish, is Toaster’s’ Reuben ($7.25), with sliced-to-order pastrami, sauerkraut, Swiss cheese and a smidgen of Russian dressing. Each sandwich at Toaster’s comes with a side of potato chips, and I tend typically to opt for the $7.49 combo meal: half-sandwich, cup of soup, potato chips and a fountain drink.

The soups at Toaster’s--which are not made in-house--range from very good (chicken & dumplings or minestrone) to pretty lousy (beef chili, which tastes suspiciously like Hormel). But I appreciate that, unlike its chain-eatery neighbors, Toaster’s serves its sandwiches and soups on real, reusable, glass plates and bowls. It’s good for the environment and a tad more sophisticated than eating from Styrofoam.

Rich's Mighty Fine Burgers
Just a few doors down the street from Toaster’s is Rich’s Mighty Fine Burgers & Grub. You might remember Rich Shellene from when he had his burger cart in front of the Gallivan Center. Well, thanks to the closing of Esther’s and a good rental deal, he’s now moved indoors.

“Stop by and say hello sometimes,” Shellene wrote to me in an e-mail. “Well,” I replied, “I have been in a few times, but you’re always busy yelling at your employees.” To which he responded: “LOL!” Shellene is a volatile entrepreneur--maybe “passionate” would be a kinder word--who’s taken me to task for not singing the praises of his burgers. Well, now I’m going to do exactly that: These are way better-than-average burgers.

Each hamburger ($6.45) at Rich’s is one-third pound of freshly ground chuck, flame broiled and served on a quality oversize bun, with tomato, lettuce, pickles and onions. But I’ve gotta warn you: With these burgers, you’re gonna get messy, so grab extra napkins. My favorite is the green chile burger, which comes piled high with fire-roasted Anaheim chile peppers, Monterey jack cheese and chipotle mayo sauce. I usually wind up eating this thing with a knife and fork. Ditto the Bayou Burger, Maui BBQ Burger and the Blue Cheese Crumble Bacon Burger. They all wind up being a big, delectable mess, which is at least half the fun.

I’d recommend skipping the steak sandwich ($6.95) at Rich’s, however. Mine was an inferior piece of meat: tough and chewy, with lots of gristle and fat. It was impossible to eat without a knife and fork. At the other end of the spectrum, however, are some of the side dishes. One of the most habit-forming foodstuffs I’ve ever encountered is what Shellene aptly calls “crack beans,” because they’re just about as addictive as crack. Green beans ($2.95) are battered and deep-fried, resulting in a crispy, crunchy snack that’s almost healthy. Shellene says he gets them from a purveyor with whom he has an “exclusive” arrangement--no one else in town can sell them, supposedly. That may just be more Shellene bravado, but I can tell you this: Try a crack bean or two and you’ll be hooked for life.

The french fries at Rich’s, too, are better than most, although during busy lunches the fryer oil can sometimes cool down a bit too much and the fries can turn out soggy. Generally though, I’ve been happy with both the quality of the fries and the burgers.