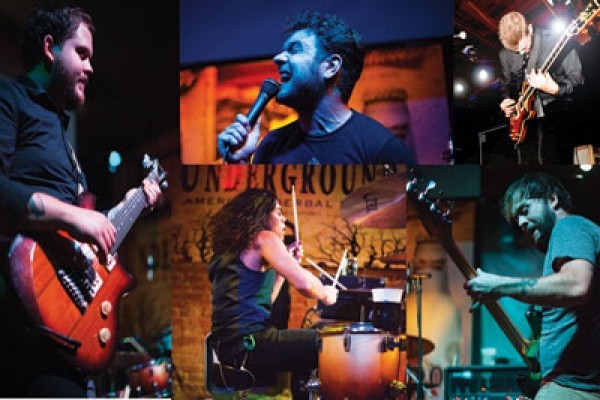 In a parking lot behind a taco shop on 3900 South, there is a door. The small entryway is framed by a mural of exotic plants and birds and has a red-tile overhang. In the otherwise grayscale industrial parking lot in South Salt Lake, the door makes a statement: Something creative lives here.

Inside, Joel Pack and Devin Patten are cutting sheets of corrugated metal in a dusty former dance studio, which is airy and well-lit, with walls of floor-to-ceiling mirrors. Pack grins boyishly as he stops to give the tour of his beloved work-in-progress, Rigby Road Studios.

A veteran of the Salt Lake City music scene, Pack quit his job managing a record store to produce music full time a decade ago and hasn’t looked back. “I had been doing studios in basements,” Pack says. “I’d had a mobile rig where I’d take it in the back of my Hyundai and record in people’s bathrooms.” About two years ago, Pack says, he found a permanent location on Main Street and immediately saw benefits. “I got a lot more busy, my clients got better [and] I got a lot more commercial work because I could have people over to the studio,” he says.

The move to the new location on 3900 South, Pack says, was prompted by the need for a bigger space. “I felt like I was outgrowing my place a little bit,” he says. While in Las Vegas with his wife, he found the dance studio on KSL Classifieds. “I saw these floors and just flipped out,” he says with a chuckle, looking down at the rainbow-stained hardwood floors.

Powered by more than 200 solar panels installed on the roof, Rigby Road Studios promises to be a recording studio like few others. There’s a mixing booth Pack designed and built with Patten, a small room for recording vocals and a small sleeping area off the main room. Outside of Utah, Pack says, it’s common for bands to live in the recording studio while cutting an album. He’d heard good things about a studio in Portland, Ore., that provided artists with in-studio accommodations and decided to replicate the idea in his new space. It not only keeps costs down for the band, Pack says, but also cuts down on travel time and distractions: “It keeps everything about the music.”

The studio itself, Pack says, has been made possible through community effort. The dozen or people who have helped him build the studio are all Pack’s friends and acquaintances. “So far, the only person that I haven’t met through recordings is the guy that put in the sprinkler systems,” Pack says with a laugh.

In between working with well-known local bands Holy Water Buffalo and Royal Bliss and building the studio, Pack is also preparing for an album release with his band, Bon Vivant. Simple Titles, set to drop Oct. 19, is a concept album about an alien invasion. Pack says he used to draw on his dark places—divorce, drug addiction—for inspiration, but, he explains, “I’ve reached a point now in my life where things are pretty cool and I’m not creating too much drama for myself.” So, instead of drawing on more typical songwriting fare, Pack turned to aliens. “There’s actually a whole story that goes with the record!” he says. “And it leaves off at the point where we could do a part two if we wanted.”

Pack describes Bon Vivant as a combination of ’90s bands Faith No More and Mr. Bungle. Simple Titles has a little something for everyone: an anthemic rock song for the emo kids (“Four Strangers”), a few ’90s throwback tracks (particularly “Return to Me”) and the haunting and contemporary-sounding “New Knife,” which closes the album with Beirut-style horns and plaintive vocals.

The album release and the studio opening will both be celebrated at a private party in mid-October. The timing just made sense, Pack says. “It’s been a pretty organic process, as far as building the studio, building the band … it’s been a total community effort.”