Can storm glasses predict the weather? 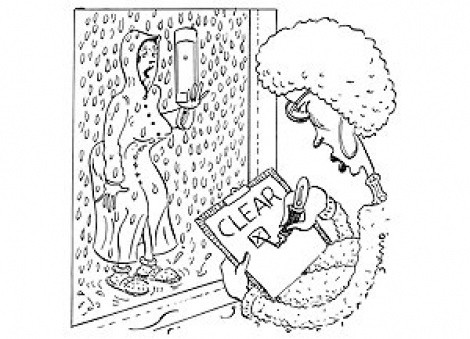 What’s the deal with a storm glass? Hammacher Schlemmer sells one and says, “Although how it functions remains a mystery, the ability of the stormglass to predict atmospheric change is well documented.” Does it work? If so, how? Or is it just a crappy lava lamp? —Dan

Hey, don’t knock lava lamps. For $179.95, a storm glass from Hammacher Schlemmer gets you a weather forecast of dubious accuracy. Whereas a 25-buck lava lamp, aided by the right combination of tunes and substances, will let you see God.

A storm glass, also called a weather glass or camphor glass, is a glass tube containing a mixture of ammonium chloride, potassium nitrate, camphor, water and alcohol, making a normally clear liquid in which different types of white crystals periodically grow and dissolve. The idea is that the mixture is so finely balanced that minor fluctuations in atmospheric conditions will change the solubility of the chemicals and produce a wide variety of crystal shapes, from tiny floating flakes to large masses of feathery fans. Each supposedly predicts a certain type of weather.

The inventor of the storm glass is unknown, but descriptions date back to the late 18th century. Early theories held that the chemical blend inside was sensitive to light, heat, wind, atmospheric pressure or even electrical charge. In some glasses, the contents were exposed to atmospheric pressure via a flexible rubber cap, but other models were hermetically sealed. (The sealed version is standard nowadays, mainly because a whiff of the contents can bowl you over.)

Interest in storm glasses crested in the 1860s, when such scientific notables as Michael Faraday, Robert Fitzroy, and Charles Tomlinson investigated their properties. Fitzroy, meteorologist and captain of HMS Beagle (of Charles Darwin fame), touted the glasses’ accuracy in his Weather Book of 1863. Tomlinson, on the other hand, tested a glass for several months and found it was sensitive only to heat, calling it a “rude thermoscope.” Japanese research from 2008 backs this up, pointing to temperature change as the sole cause of crystal growth, with the rate of cooling influencing the crystal shapes.

I decided we should check this out. However, no way was I shelling out $179.95. No problem, said my assistants Una and Fierra. We’ll make some storm glasses of our own.

They researched storm glass recipes and ordered the appropriate chemicals and laboratory equipment. A hitch: initially no scientific supply house would ship the goods to a private residence, doubtless seeing in the ominous-sounding chemicals the ingredients of a terrorist plot. Una eventually convinced one supplier to send the chemicals after producing her engineering license.

Toiling late one night at Straight Dope Labs, Una and Fierra made six storm glasses. Each consisted of a big test tube filled with the precisely measured chemical mixture, then capped. At first the experiment looked like a bust—the storm glasses became opaque with massed crystals. But after a few days, the initial crystal growth settled to the bottom of the tubes, leaving the liquid above clear. Thereafter new crystals would grow or diminish in response to … well, that’s what we meant to find out.

Every day for 12 weeks, Una and Fierra diligently recorded local weather conditions plus their observations of the crystals in each glass. Problems soon emerged. First, how do you read crystals? Previous researchers’ descriptions were vague, but this much seemed plain: clear liquid meant clear skies, while crystals or cloudiness meant precipitation, which we defined as rain. This gave us a couple simple tests: the storm glass was clear or it wasn’t; rain fell or it didn’t.

Next, what constitutes rain? A sprinkle in the storm glass’s immediate vicinity? A thunderstorm the next town over? Una figured she’d err on the side of caution, counting a day as rainy if at least 0.01 inches of rain fell within a 20-mile radius. A final problem was that the glasses often disagreed. Example: one day before a thunderstorm, half the glasses indicated clear skies and the other half showed rain.
In the end, accuracy for individual glasses ranged from 45 to 54 percent, for an average of 49 percent. I’ve got a penny in my pocket that can do as well as that.

Defenders of the storm glass may blame this poor showing on our simplistic scoring method. Suppose a storm glass develops crystals, indicating rain, and subsequently the weather is overcast and threatening—but no rain actually falls. Was the storm glass wrong?

To avoid such ambiguities, I had Una look strictly at days when it rained: Did the storm glasses show crystals or not? Result: 53 percent accuracy, with a range of 38 to 62 percent.

The glasses were more likely to predict rain when they were cooler or cooled off quickly. The latter could signify passage of a cold front, so it’s plausible that a storm glass might sometimes correctly predict deteriorating weather. Una also reported that the crystals were pretty, if unexciting to watch. Personally, I’m sticking with the lava lamp.