Riot Act shifts gears to the contemporary rhythms of The Aliens. 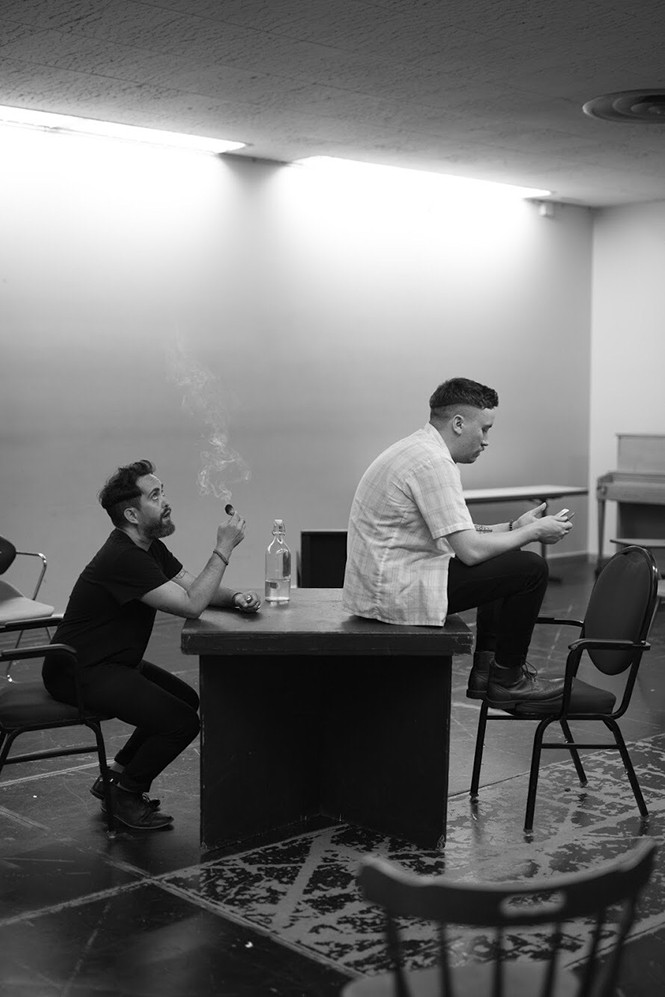 Over the course of its short local lifespan, Riot Act Theatre has been devoted to the idea of giving a modern spark to vintage works, like Poor Bastard updating Chekhov's Ivanov, or Høüses working from Romeo and Juliet. So what is creative director Whit Hertford doing producing The Aliens, a 2010 work by relatively unknown American playwright Annie Baker?

"I always do this thing where, if I'm going to program a show, I go, 'Why this, why now and why me?'" Hertford says. "If the play I'm thinking about doesn't hit all those questions with a relevance, I can't just trot out my favorite corpse of a play because it's like, 'Oh, I really want to do this vanity project.'"

The Aliens is a contemporary tale set in Vermont, where two 30-something friends spend their time hanging out behind a coffee shop, chatting about Charles Bukowski poetry and the bands they want to start. Over the course of the play, a teenage employee of the coffee shop tries to get the loiterers to move along, and instead gets roped into their conversation. The result is something that Hertford describes as a mash-up of Kevin Smith's Clerks, American indie "mumblecore" cinema and Samuel Beckett's Waiting for Godot.

The answer to the "why me" part of Hertford's question is connected to his longtime friendship with actor Austin Archer. The two co-direct the production, and also play the two slacker pals, but their connection goes back to when Archer was the high school prom date of Hertford's younger sister. "Our early Facebook messages were much more contentious than you might have expected, because we're like brothers now," Hertford says. "We had to feel each other out."

Still, Hertford says that Archer wasn't initially sure about whether he was right for the show. "He said, 'Do you really think I'm the best fit?'" Hertford recalls. "I said, 'We hang out and get drunk all the time; we are these guys. We have these conversations.'"

And Hertford even relished the opportunity to get on stage himself rather than simply work behind the scenes. "I've been acting since I was 4," Hertford says, "but nobody asks me to act in Salt Lake. I don't know if it's because I have my other stuff going on, or if they think I'm an asshole. Probably a little bit of both."

The Aliens gave Hertford and Archer a perfect vehicle in which to work together, showing off a give and take that Hertford describes as "like a McEnroe/Borg match." They also opted to take preparation for their characters—who once played in a band together—up another notch. "These guys always talk about how they're musicians," Hertford says. "There are a couple songs that we do [in the play]. They're not good, and they're not supposed to be good. But almost before we started rehearsals for the play, we said, 'Let's get into a rehearsal room with drums and a guitar and just play.' So we did a couple of house shows as The Aliens. It was really cool to do a meta thing to fortify the bond we have on stage."

The "why this" and "why now" parts prove to be slightly more complicated. On one hand, Hertford acknowledges that a play about three white guys isn't exactly edgy, "because we don't need any more of that." Yet he believes that Baker explores characters who could easily be interpreted as hippie burnouts in a sympathetic and perceptive way as something more akin to "gypsy artists."

"I think it speaks to the forgotten middle class in a way that's surprising," Hertford says. "There's an empathy that Annie wrote, where you see these guys realize their missteps in life. ... We live in a country currently that we have a really tough time communicating. And sometimes we don't value our friendships the way we should. It's about asking bigger questions in a really simple way."

While The Aliens might not fit the profile of the kinds of shows Riot Act has done previously, Hertford believes it absolutely continues his emphasis on the importance of performance. This stripped-down show is also one that involves what he describes as a lot of "structured silences" in a play that explores boredom, which presents its own unique challenge for actors and directors. "It's high-risk/high-reward," Hertford says. "If we don't keep our foot on the gas, that part of the play is going to be death."