Julian Koster takes his podcast The Orbiting Human Circus (of the Air) on tour. 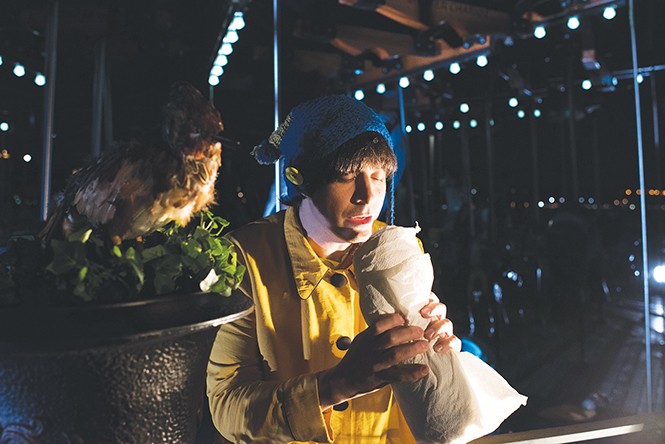 It's fitting that this conversation with Julian Koster takes place over the phone. For weeks now, I've been a spectator in his surreal audio theater, getting acquainted with the musician/actor/writer's bright, optimistic voice via his narrative-driven podcast The Orbiting Human Circus (of the Air). Much like its protagonist, I feel like I've fallen into a reality I thought was only fantasy.

For those who have yet to experience the former Neutral Milk Hotel and Elephant 6 Collective alum's foray into audio storytelling: Circus is the tale of an imaginative janitor who tidies up during a chronologically ambiguous radio show broadcasting from atop the Eiffel Tower. "One nice thing about Paris is that it has this infinite feeling to it," Koster says. "But as long as you see the Tower, you know where you are."

From a young age, he was attracted to lush, arresting storytelling. He says it's a "miracle" when actors and audiences get together and lose themselves in imaginary realities. "It's an amazing tradition, and it's a great honor to carry that torch," he says. At first, he tried to create great escapes through music made with whatever instruments he could find. Inspired by concept albums like the Beatles' Sgt. Pepper's Lonely Hearts Club Band, Koster "wanted to make movies for your ears."

These early stages of musical experimentation led him to join Jeff Mangum's one-time solo project Neutral Milk Hotel, playing on the band's beloved second album In the Aeroplane Over the Sea (Merge, 1998) and the Ferris Wheel on Fire EP (Neutral Milk Hotel Records, 2011). Koster says he and his fellow NMH members were kindred spirits, each making their own concept albums, "building music out of sound effects instead of just instruments." While in the band, he worked with fellow Elephant 6 compatriot Robbie Cucchiaro on The Music Tapes, playing odd instruments like the musical saw and chord organ and performing in circus tents. From 1997-2012, they issued five albums, an EP and three 7-inch singles. In 2013, Koster shelved TMT for a reunion tour with NMH, which ended in 2015 with a statement saying they were done "for the foreseeable future."

While he continued to experiment with unorthodox instruments and circa-1940s recording equipment, he developed The Orbiting Human Circus. As with NMH and TMT, the podcast/radio show was initially a one-man operation with Koster writing, directing and producing. Then Cecil Baldwin, star of the Welcome to Night Vale podcast, appeared on Circus around the time that Night Vale's creators began acquiring similar productions under their Night Vale Presents banner. "They picked us up right away," Koster says.

Circus is a surreal meta-tale of dreams, magic and shattering the doldrums of menial reality. Koster plays the lead character, Julian the janitor, who discusses his experiences with an imaginary friend/narrator (Drew Callender). The first season features an impressive roster of voice actors, including Tim Robbins, John Cameron Mitchell (creator/original title character in Hedwig and the Angry Inch), Charlie Day and Mary Elizabeth Ellis (both of It's Always Sunny in Philadelphia). Koster's use of vintage studio gear infuses each episode with a dreamy, faraway atmosphere. "I can put something through a 1940s wire recorder," he says, "and when I play it back, it's coming from 70 years ago. It's like time travel."

In February, Koster released The Orbital Human Circus EP (Merge) and took his collection of musical antiques on the road for live performances throughout the country. He designed the live version of the show so that audiences will be transported. "When people enter the venue, it'll be kind of like walking into another reality," Koster says. Before anyone enters the venue, Julian will be there working, as though the show is over and the venue is closed. The idea is to give audience members the sense that they're walking into a familiar but strange place: Julian's imagination. Things happen all around you—it's like walking into an immersive play," he says. He makes a point to say that no foreknowledge of the podcast is necessary going into the performance.

Fans of Circus can check out Koster's new special, available May 10 through Night Vale Presents. "It's a five-episode arc of a different story," he says. When the tour wraps up, Koster will shift Season 2 of the podcast into high gear, accompanied by another musical supplement. "The audience for these stories is great. They're super devoted and super adventurous."