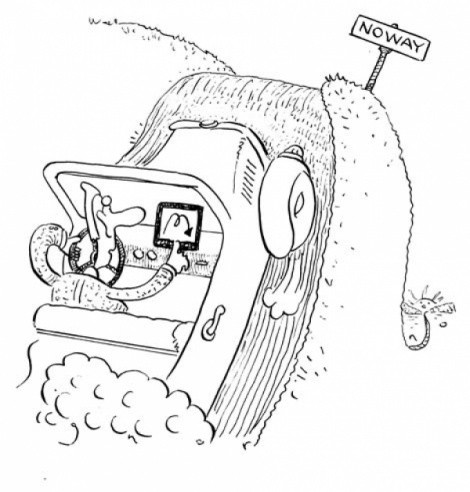 Is it true our GPS satellites are deteriorating and there’s no good fix? —Imtazman1963

Pretty much. Frightening, isn’t it? We’ll have to go back to using maps.

One doesn’t wish to make light of the situation. For most of us, failure of the Global Positioning System merely increases the likelihood we’ll get lost in Pennsylvania. For the military and some emergency services, matters are more urgent. The satellites have limited life, typically seven to 10 years. There’s no practical way to fix them once they break.

Of the 59 GPS satellites launched to date, 31 are still operating. Of those 31, 17 are past their life expectancy—the oldest was launched in 1990. So, if I were planning a military incursion into yet another trackless Third World region, I’d have reason to think better of it.

Worries about the GPS arose in May 2009, when the U.S. Government Accountability Office (GAO) released a report saying, “It is uncertain whether the Air Force will be able to acquire new satellites in time to maintain current GPS service without interruption. If not, some military operations and some civilian users could be adversely affected.”

The problem is that 24 functional GPS satellites are required for complete global coverage. With 31 still beeping, we’ve got plenty of spares for the moment. However, due to a combination of schedule slips, construction problems and cost overruns, we haven’t been launching new satellites fast enough to replace those likely to fail soon. The GAO estimated that, over the next four years or so, the probability that at least 24 satellites will remain operational will be less than 95 percent, at times dipping as low as 80 percent.

The GAO says possible adverse effects are “hard to precisely define,” but reception could suffer in dense urban zones and mountainous regions. One urban GPSdependent technology is the “bus tracker” feature used by some transit systems. So if too many GPS satellites go dark, not only will some Straight Dope readers be freezing on a corner waiting for the bus, they won’t even have the comfort of knowing the next one is running 19 minutes late.

Don’t be alarmed, though—the Air Force is on the case. Two days after the GAO report was released, they responded with a Twitter news conference, confidently tweeting that “going below 24 won’t happen.” This was followed up with a plan to move spare satellites closer to those expected to fail, improving current coverage, minimizing outages, and buying time to get new satellites aloft.

The fact that GPS technology has become ubiquitous is the best guarantee that the system won’t be out of action for long, if at all. Ten years ago, civilian GPS use was confined to a gaggle of geeks. Today, if the system goes down, just imagine the screaming: Fix this sucker now.

Sunscreen Savvy
I contend if I’m at the beach and have only SPF 8 suntan lotion, I can put on two coats and have the equivalent of SPF 16, three coats for SPF 24, etc. My friends disagree, so any input from Cecil on such a weighty matter would be greatly appreciated. —Zaine Remus

I’ll be straight with you, Zaine. I was prepared to jump on you with both feet, thinking this was the most inane idea the Teeming Millions had come up with in . . . oh, at least two weeks. However, one wants to be thorough, so I looked up the research. You know what? Turns out you’re basically right.

First, a quick review of sun protection factor, or SPF. A sunscreen bearing a rating of SPF 15 means it’ll let you spend 15 hours in the sun and get the same exposure as one hour without protection. SPF 30 means 30 hours, etc. That’s a rough guide; variables include skin type, activity level, and so on.

The thing is, most people don’t put on enough sunscreen to get full protection. According to the FDA, you’re supposed to use two milligrams per square centimeter of skin. (For a beach-goer standing 5 feet 4 inches tall and weighing 150 pounds, that’s about an ounce.) Most people, though, use only half a milligram.

The research I found (and there wasn’t too much) suggests SPF effectiveness varies exponentially with the amount you actually use. If you use half the prescribed amount, you get the square root of the SPF; if a third, the cube root; if a fourth, the fourth root. So if you use half a milligram of SPF 16, the real SPF is 2. Works in the opposite direction, too. One experiment found a double dose of SPF 4 resulted in SPF 16. I have a hard time believing a double dollop of SPF 8 would produce SPF 64.

But would it at least double, to SPF 16, as you contend? I admit it probably would.