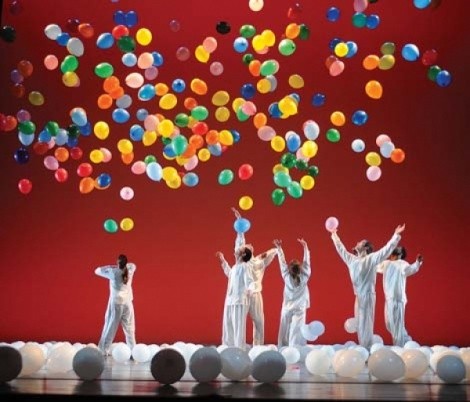 “Balloon” is synonymous with “fun,” and Ririe-Woodbury Dance Company takes it up a notch not only with balloons by the hundreds, but also with hula hoops, ping-pong balls and a giant weather balloon.

The family-friendly production Circle Cycle presents the world through the eyes of a young girl—narrated by education director Gigi Arrington—who discovers the cyclical nature of life. Using images of orbs, balls and spheres, represented by volleyballs and other circular objects, the series of vignettes explores beginnings that become endings, and endings that become beginnings. As movement, music, props and costumes revolve in and around one another, audience members both young and old can expect an unforgettable performance that is fun to watch and which reveals something about the infinite cycles of our lives.

Originally created in 1992 by Shirley Ririe and Joan Woodbury, the work took more than two years to choreograph, and features a collaboration with University of Utah professor Xan Johnson and artist Kenvin Lyman as well as choreography by Tandy Beal and Jerry Pearson.

Each year, Ririe-Woodbury puts on a family-friendly production. Ririe-Woodbury will perform five student matinees that will be free to all Utah schools.