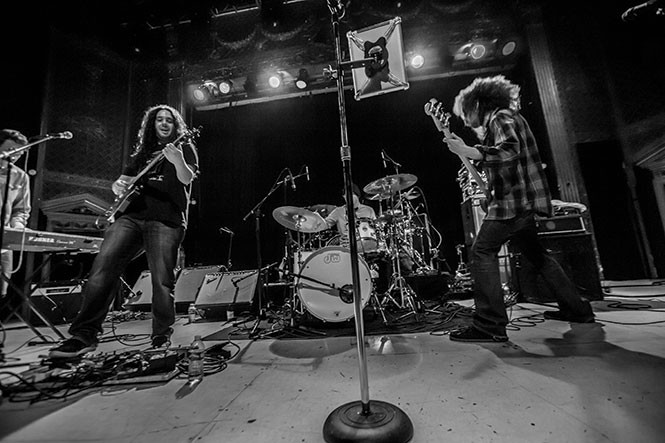 Pity the poor soul who's asked to define just what funk is. James Brown likely found the funk somewhere in his gut. George Clinton had it beamed down from another galaxy entirely. If you ask Josh Fairman, bassist and co-founder of Denver's Analog Son, he'll tell you that you'll know it when you feel it. "Does it make you want to move? Does it make your upper lip curl up?" Fairman asks in a telephone interview. "For me it's how it makes you feel."

Since releasing their self-titled debut in 2014, Analog Son has made serious work of answering these elusive questions. Fairman describes the process as like that of a joyous laboratory, tinkering and experimenting with guitarist Jordan Linit and a host of collaborators until that eureka moment finally comes. "Jordan will play something and I'm, like, 'You did it! Oh, it's funky!'"

Fairman and Linit have been playing together ever since they were 13 years old, growing up in Columbia, Mo. Fairman says their gateway to funk was through '90s rock and hip-hop artists who incorporated elements of it in their music—Red Hot Chili Peppers, Snoop Dogg, Rage Against the Machine. Eventually, that led them to funk pioneers such as Parliament and James Brown. Fusion, jazz and jam bands followed suit. "By the time we were in our teens, we were playing instrumental music," Fairman says. "We've been playing 'Jungle Boogie' since we were 14 years old."

The two friends moved out west thanks to music scholarships at the University of Denver, where they studied jazz. After spending about 10 years in a jam band, Linit and Fairman formed Analog Son as a way to focus exclusively on funk—the music that captivated them in the first place. "It's kind of nice to just focus on one genre," Fairman says. "Basically, when we're writing the music, it's only one question: Is it funky?"

Analog Son sees itself as toeing the line between funk's past and its future. The name of the band pays homage to the golden age of funk, when its forefathers recorded to tape and mixed on big studio consoles. "That's where we come from," Fairman says. "My dad saw computers get invented. They invented that stuff one generation before us. ... We're trying to preserve some of that music."

Fittingly, the group gets a lot of help from those who came before them. For a relatively young band, they've already racked up an impressive list of collaborators who used to be musical heroes of theirs. The band's newest album, Black Diamond—which is released Jan. 27—was recorded in New Orleans in the middle of its Jazz and Heritage Festival. Fairman described being able to watch one of their heroes—Oteil Burbridge, a former member of The Allman Brothers Band—play at a club one night, only to have him sit in on a recording session shortly after that. Other guests were Ivan Neville (Dumpstaphunk), Nigel Hall (Lettuce) and Terrence Houston (Funky Meters).

Still, for Fairman, playing with his heroes didn't turn out to be as intimidating as it seems. "When you're in there playing, the music is the great equalizer," he says. "Even though we write the music, the music really comes alive with whoever's on the track."

The recently released track off the new album, "Sunshine," features Ivan Neville on vocals. It's a sturdy mix of soul, blues and funk that shows the band in control of its own kinetic energy. What often gets lost in the carefree energy of the song and others like it, is that it takes a lot of discipline to sound like you're having that good of a time. Fairman and Linit don't totally escape their jam band tendencies to improvise and experiment, but once the song is put to tape, they've forged an intentional path that keeps it from going off the rails. If you want to lay down some heavy funk, you'll first need a structure that's sturdy enough to support it.

The band's ability to record—and keep up—with such a diverse and experienced roster of guests is also a testament to their ability to adapt to the musical environment they create. Fairman and Linit are usually the ones who develop an idea for a song, but once they're in the studio, they leave enough room for it grow on its own. "There's a lot of trust involved," Fairman explains. "Especially if one of us has an idea and then you have 10 different people playing on it with different ideas."

It's a process that doesn't leave a lot of room for ego. "Sometimes it's a balancing act between preserving the original intent ... and then being open to these amazing people's ideas," he says. "But it tends to work out." In other words, Analog Son is funky—and it feels good.