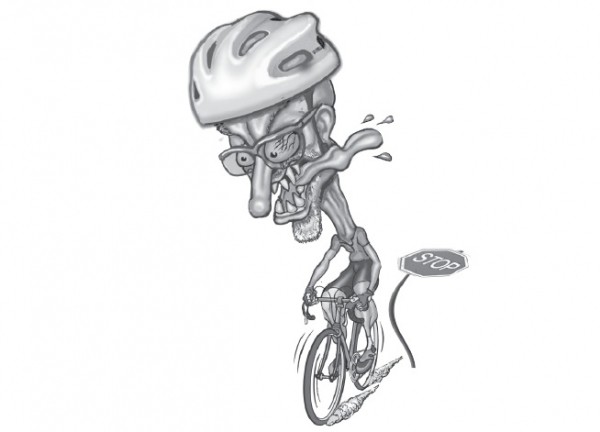 If there were a more universally despised segment of the citizenry than cyclists in spandex, I don’t know what it would be. Everyone has a story, or several, of encounters with lads attired in their form-fitting spandex cycling costumes. Here they come, three or four abreast, shouting inanities about some awesome recent ride, running stop signs and red lights, oblivious to any rules of the road and ready with the middle finger and a throaty “F You!” if you point out any of their multiple infractions.

A typical encounter was reported to me by a mild-mannered soul who has nothing against bicyclists, just the self-righteous ones encased in black spandexed shorts, regulation chamoises and multicolored racing jerseys. He himself was the first on his block to get one of those nifty Schwinn 10-speeds many years earlier and rode it all over town, careful to stop at stop signs and red lights, look both ways and then proceed cautiously.

Back then, there wasn’t a distinction between everyday clothes and bicycle wear. The only accessory was a clip or elastic to keep your pants from getting enmeshed and greasy in the sprocket and chain. Or, you could just roll up the bottom of your Levis. You wore your shorts in summer, baggy or otherwise, and certainly not so tight that you strangled your scrotum.

But I get ahead of myself, like some eager cyclist racing through a stop sign. According to my friend, he was stopped at the busy intersection of 1500 East and 1700 South on a balmy day some weeks ago when a wiry gent zoomed past, not so much as slowing a fraction of a second. My informant caught up just enough to get a glance at the jersey of the furiously pedaling cyclist. The insignia was some sort of red cross. Perhaps he was a member of the medical profession and was racing to perform CPR or the Heimlich Maneuver on some unlucky citizen. Or maybe he was on the Swiss racing team and somehow had made a wrong turn out of the Alps and was desperately trying to get back home.

In any event, the red-cross rider sped south on 1500 East, running two more stop signs, exuding sweat and anger, his hawk nose cleaving the wind, his large nostrils in mortal combat with the circumambient air for available oxygen molecules. My friend pulled slightly ahead of the cyclist as they approached the intersection of 1500 East and 2100 South. He then came to stop and signaled for a right-hand turn. In his rearview mirror, he saw the cyclist veer toward the driver’s side and pull up next to the window.

My friend looked up through the open window, thinking perhaps this agitated rider was simply lost and was seeking to call upon the kindness of strangers. Or maybe his chamois insert was performing some sort of twisting action vis-Ã -vis his manly bits. My friend was loath to come to his aid if the latter were the case.

But my friend was willing to lend a hand with whatever else was bothering the rider. Imagine my comrade’s dismay when the wiry cyclist, his neck tendons bulging, his mouth a whirlpool of spittle, screamed, “You’re blocking the intersection, dipshit!” This was indeed the very apotheosis of assholic entitlement. When my friend asked the chap if he realized he had run several stop signs, he began to sputter unintelligibly and appeared to be on the verge of spontaneous combustion. Fortunately, his snug spandex was keeping him safely intact, like one of those thunder shirts whose purpose is to contain deranged dogs.

With a few more quaint epithets on the order of the devastating “dipshit,” referenced above, the spandexed road warrior, his bony haunches churning, pedaled away, shouting imprecations at any innocent automobile that happened to encroach upon his privileged journey.

When he reaches the Pearly Gates, I suggest he dismount and come to a full stop. And lose the spandex. If the Lord had intended men to wear spandex, he wouldn’t have invented trousers.