Two seventh-grade developers discuss the rise and fall of their Trump-inspired video game. 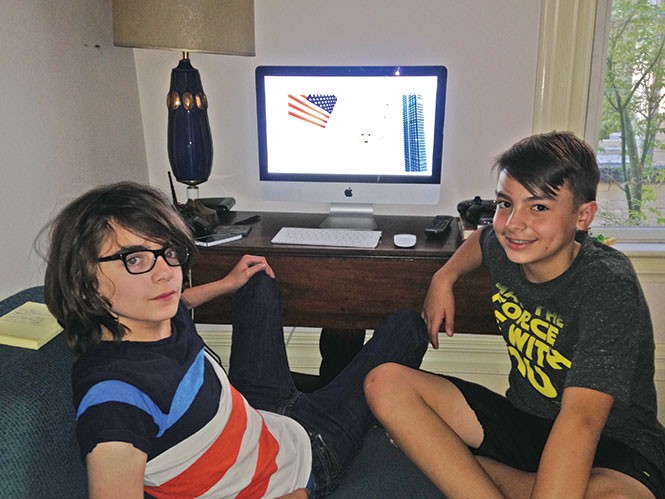 Video games have become more integral to the lives of modern teenagers than almost any other form of entertainment. While this might evoke images of inactive, disengaged teens who use the words "noob" and "lulz" too much, there's an often-overlooked aspect of gaming culture—creative development. Thanks to games like Minecraft, young people have begun to adopt a more thoughtful approach to video games, using them as virtual platforms to express themselves and collaborate with others. That's what Chris Cordova and Sam Glick, two seventh graders from Salt Lake City, loved about a website called Roblox, a free, kid-friendly social network and development platform that gave them the resources to work on a game together over the summer.

On Aug. 11, they launched their final product on Roblox's online community, it instantly took off, and, naturally, the amateur developers were ecstatic—until their game was pulled from Roblox's servers for violating the site's rules of conduct.

The pair says because the game features images of Donald Trump and the "great wall" he claims he'll build between the United States and Mexico.

"It's like an obstacle course," Glick, one-half of the newly formed Curious Studios, says of the game titled Get Over Trump's Wall.

Eager to show it off in motion, the 12-year-old powers up his iMac that has been moved to the kitchen table in his parent's Salt Lake City home. About 10 minutes into it, he has taken charge of his avatar, a blocky, three-headed dude with a snake wrapped around his neck. It's not long before he's leaping over American flags and doing parkour through Trump's mansion on his way to the White House. Next to a climbable facsimile of Trump Tower, a gold statue of The Orange One himself stands imposingly over the landscape, waving the stars and stripes. After a swan dive into Trump's swimming pool, Glick navigates through a few more obstacles until he makes it through the wall and into Mexico—where he is welcomed by an audience of Mexican corgis, no less.

Neither Cordova nor Glick have particularly strong political opinions—they're seventh graders, after all—but there was something about Trump's persona that stuck with them. "He's just everywhere," Cordova says. "We just used him because we thought it would be funny, and he's trending right now." Something within that equation worked, because the game earned over 30,000 unique hits after spending only two days on Roblox's servers.

While that's a huge win for any independent artist, the folks at Roblox weren't too happy with Curious Studios and their representation of the Republican presidential candidate. Not long after the game's launch, Glick received an email from a Roblox admin in which he was informed that his game would be removed and that his account would be temporarily suspended. "It was all very surprising," says Sam's mother, Elaine. "There isn't anything offensive in the game at all."

Roblox's rules of conduct are specific about users posting adult content or material that promotes illegal activities. In the section called "What Not to Post," it reminds users that, "If you are a member of a religious or political group, Roblox is not the place to post about your political views or religious ideals." But that's where things get a little murky. As someone who just had their first experience with Get Over Trump's Wall, I can tell you that the game doesn't have a political agenda—unless you happen to feel very strongly about obstacle courses.

Still, a handful of games with some variation on the title Kill Donald Trump are still playable on Roblox. "They need more of an explanation," says Chris' mom Vicky, "There needs to be some more rights for users to be able to have their game. They just took all of their work away from them."

"I find it sad that companies and organizations continue to target, market and depend on our children for their personal growth and then censor them and stifle their creativity," Chris' father John Cordova says. "So many mixed messages for such a young age."

Even though Glick and Cordova's stint didn't have a happier ending, it's far from game over. "I think we learned a lot because we built it so fast," Cordova says, "but we can build more games in the future, and build them longer and make them better." It's also taught them to be careful with their expectations. "The games that have over a million views take years to make," Glick adds. "Us, we just took off so fast, and that's not what you want to do."

No hard feelings, the pair says, though a defiant message saying, "Thanks Roblox for deleting this," now sits where Get Over Trump's Wall once lived, which hints at the fact that the two budding game developers didn't take the situation lying down. After all, they created something that ended up getting shut down by the powers that be. Any artist will agree—they're doing something right.