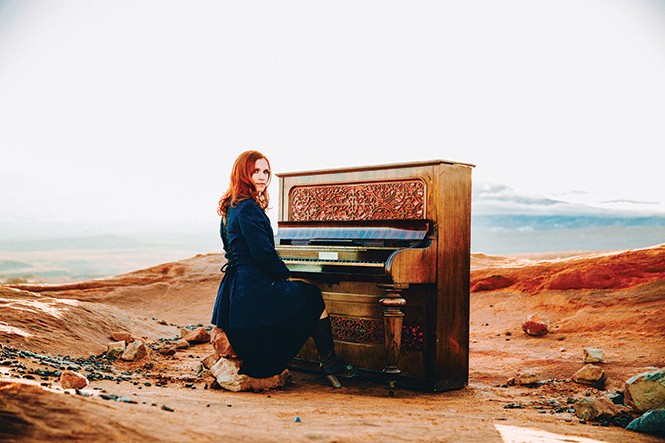 Usually, people move to New York City to chase their dreams—but not Robyn Cage. The native Utahn was living the dream as an actress in New York to move to Park City, Utah, to become a singer. Now, Cage—a classically trained pianist with a clear, operatic voice—sings edgy, alternative-pop songs, about half of which she wrote in the desert of Southern Utah.

After studying at the Boston Conservatory for four years and acting on the stage in New York for five years, Cage serendipitously wrote "Trust You," (released on the Raining Sideways EP under Robyn Kemp) in response to a call for new talent from a producer in New York. She'd been working at a restaurant, as she did to bridge the financial gap between booking shows. She was getting ready to take a trip home, and a friend offered her a gig while she was in Utah. After talking to him, she was soaking in the sauna at her gym and thought, "Or, I could cancel my return flight, and stay home."

"I felt completely liberated," she says. In New York City, she'd been miserable. Desperation followed her to every audition; dread hung near the end of every show she did book. When the idea came to her that she could move, she jumped on it.

"It's kind of funny that I spent a couple years not loving New York, and it hadn't really occurred to me at all," she says. "I think that's the case for a lot of people; if they're in a relationship that isn't healthy, or they're in a place that isn't making them happy. ... Sometimes, you've got to make changes."

"I wanted to create an alter-ego that was certain aspects of my personality, amplified," Cage says. "Robyn Cage has more of a dark side. I think that came out of my time in New York ... I wanted to create this character that feels a little bit otherworldly."

The decision to be a singer was a natural move. As a kid, growing up in Salt Lake City, she sang often enough that her parents imposed rules: No singing before 8 a.m. or after 10 p.m.; no singing at the table, or in the car or in lines at Lagoon.

Her family spent a lot of time in Southern Utah, and that part of the state has inspired a lot of her writing, including her upcoming album, Born in the Desert. Cage says it's also metaphorical: "Born in a desert means that I felt like I was born with nothing, artistically. I had to work for everything I got. It didn't come easily or naturally."

One of the Southern Utah-born songs, "Theatre Noir," is one of her most experimental. "On a camping trip to the desert, I wrote all the lyrics, and then I thought, 'I don't know what to do with this. Is it a poem? Is it a song? Is it a performance-art piece?" she says.

The song was inspired by her husband's willingness to move to Los Angeles with her—which had been the original plan—despite his hatred of the city. "Theater Noir" started as a story of a man who joined the circus to be with the woman he loved. The story morphed; a man disfigured himself so he could join the sideshow to be with her.

It's theatrical, edgy and backed by two layered pianos (a vintage 1860s Steinway and a toy antique piano with keys missing) to create a jangly, saloon-type sound. Cage speaks parts—an idea from Stuart Maxfield of The Fictionist, who co-wrote the song. The first time Cage and her band played it live, the audience took to tangoing while they drank from wine glasses. "That's what the song brings out of people—it's this weird, celebratory thing," says Cage.

The lyrics had come to her quickly—much like the decision to leave the East Coast and acting. For the last year she lived in New York, she'd been in crisis, deciding what she wanted to do with her life. "I was in the wrong place, doing the wrong thing with my life and I was in the wrong relationship, and I was at the point where I was willing to throw out everything and start from scratch," says Cage.

Starting from scratch meant a new venue for self-expression. "That's what 'Theatre Noir' is about. It's: Be your own freaky self."