Tacos at Rose Park's El Cabrito are in a field all their own. 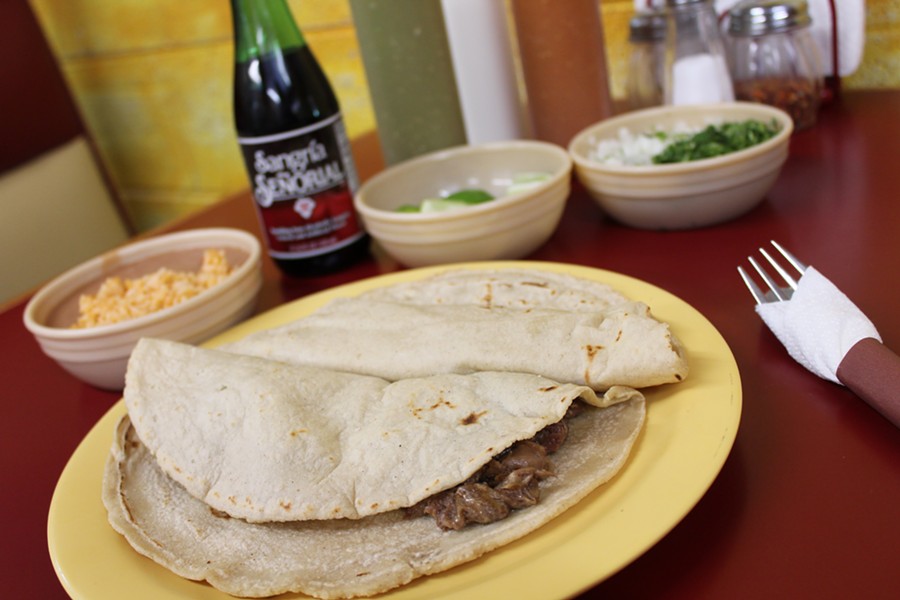 Despite goat being the most consumed red meat in the world, it has yet to catch on widely stateside. There are a lot of factors behind this, but chief among them is the fact that the beef industry cornered the meat market back when the country was still getting its sea legs. Thanks to years of "Beef, it's what's for dinner" commercials, Americans haven't fully accepted goat meat in the way they've embraced goat cheese, which actually creates a sustainability problem in the long run. Since goats need to have offspring in order to produce the milk for popular goat cheese, farmers struggle to find a market to sell other goats. The solution? Eat more goats. Oh, or go vegan. That's a thing, too.

I'm someone who lacks a vegan's discipline, and I'm also fairly new to the goat-eating crowd. I grew up on hamburgers and all-beef hot dogs, just like a lot of Americans. My initial aversion to eating goat springs from the fact that, since Wendy's commercials kept asking "Where's the beef?" instead of "Where's the goat?," goat meat must be inferior in some way. Having tried goat at a few places, I think Rose Park's El Cabrito (956 W. 1000 North, 801-363-2645) is the best spot for curious carnivores interested in giving goat a try. After all, the eatery isn't named after these cloven-hoofed critters for nothing.

El Cabrito's interior is a pleasant throwback to its authentic Mexican roots. The stucco walls are painted to resemble aging adobe and exposed brick, transporting the diner to a location that could easily be found in cities closer to the southern border—San Diego's Old Town comes to mind. The atmosphere is warm and welcoming—and the place is always packed. El Cabrito's vast menu is front and center, touting everything from traditionally prepared tacos and burritos to Mexican soups like pozole ($8.49) and menudo ($8.49).

Goat novitiates will want to start with the tacos de chivo ($2.25). Served on El Cabrito's housemade tortillas, these tacos are served street-style. You get a generous helping of meat wrapped up in a tortilla, along with a dish of salsa, onions, cilantro and several sauces. The one difference between these tacos and their street-cart counterparts is their size—these things are gigantic.

Those who have tried goat and found it tough and unwieldy—which can happen if it's not cooked properly—simply need give one of these expertly prepared tacos a try. The meat here is slow-roasted, letting the goat's lean, slightly sweet flavor shine through. Paired with a plethora of optional toppings, it's an example not of what tacos are, but what they can aspire to be.

Venturing toward more traditional meats, the carnitas burrito ($6.99) just might be the acme of burrito evolution. It will fool you with its humble presentation, slathered in green chile and a healthy dose of melted Oaxaca cheese, but this is what people are talking about when they gush about something simple done extremely well. It's stuffed with slow-roasted pork carnitas—prepared with just as much culinary talent as the goat—rice, beans and that's it. Despite its unassuming presentation, this burrito could take down just about every other one I've eaten to date. And that's a hell of a lot of burritos.

Outside of having an accessible outlet to slightly more exotic meat options, El Cabrito is a bastion of authentic Mexican food that absolutely bullseyes the warm, comforting deliciousness that you'd hope to get from such vibrant cuisine. Even if you're not ready to give goat a try, trust me, the carnitas alone are well worth the trip.